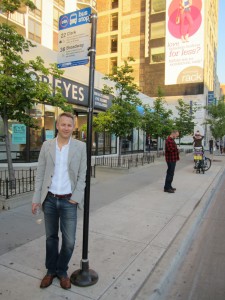 Acid jazz pulsed on the sound system as a group of stylishly dressed transit fans clinked wine glasses last week at Vapiano, a sleek Italian restaurant at 2577 North Clark Street in Lincoln Park. They were there to launch the Chicago Streetcar Renaissance, a campaign to create a world-class streetcar line on Clark from the Loop to Wrigley Field, and eventually add lines in other parts of the city.

“Our mission is to grow the economy and the population of Chicago every year while reducing traffic congestion and making the city easier to get around,” says John Krause, the architect who founded the movement, nattily attired in jeans and a dove-gray sports jacket. “That means every year there will be more people and fewer cars, more commerce and less congestion.”

He has a vision of the clogged traffic and the notoriously sluggish buses on Clark replaced by efficient, comfortable streetcars, more pedestrian traffic, on-street cafés and broad bike lanes. “The only way you can get rid of cars is to replace them with something better,” he explains. “In a car paradigm everybody assumes the city is going to grow more and more congested. But a public-transit system is the opposite. The more people use public transit, the better it gets.” 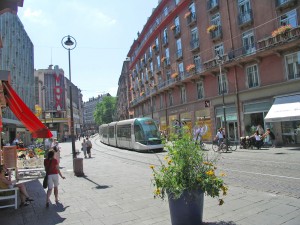 Photo courtesy of the city of Strasbourg

Krause studied and worked in Gothenburg, the second-largest city in Sweden, for eight years and was inspired by the excellent infrastructure there. “They have streetcars and separated bike lanes all over town,” he says. He got the initial idea for the streetcar campaign last summer, and that fall his wife gave him a ticket to the Rail-Volution conference in Washington, D.C. as a birthday present. “People there gave me so much positive feedback about the idea that it encouraged me to do this in a really public way,” he says.

Until the 1950s Chicago had the biggest streetcar system the world had ever seen, Krause explains. He shows me a 1924 map of the network, when virtually every major street had an electric streetcar line. But in the postwar era diesel buses and private cars replaced the trams and soon the roads became snarled with traffic. Nowadays Chicago is ranked as one of the most congested cities in the country, with the cost of time wasted in traffic estimated at $7.3 billion a year.

The Clark Street line would pass through the four zip codes with the highest transit ridership in Chicago, with over 70,000 daily bus boardings—more riders than most of the CTA ‘L’ lines. But Krause says the poor quality of the area’s bus service doesn’t reflect its high ridership. Half of Lincoln Park’s commuter buses (the #22 Clark and #36 Broadway) go down congested Clark Street. The other half (#134 Stockton/LaSalle Express, #143 Stockton/Michigan Express, #151 Sheridan and #156 LaSalle) run on the eastern border of the neighborhood with less congestion but no retail. In addition, he says, the land along Clark is underutilized, with multiple surface parking lots in River North and plenty of unoccupied storefronts in Lincoln Park. 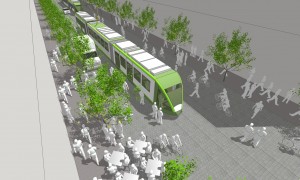 Krause would like to consolidate all six commuter bus lines into the Clark Street streetcar service. This would double the frequency of service on Clark, bring commuting and shopping onto the same street and increase the foot traffic, helping the local merchants. Automobile through traffic would be rerouted to Stockton Drive and Lake Shore Drive but cars would still have local access to Clark for tasks like deliveries and dropping off and picking up passengers.

The streetcars would get priority in the travel lanes so they’d never get caught in car traffic, as well as signal prioritization, meaning stoplights would turn green when the trams approach them. The streetcars would cut costs because they can carry three-to-six times as many people as a typical bus, and driver salaries make up much of the expense of operating the CTA, Krause says. Furthermore, streetcars offer a faster, smoother, more comfortable ride, so they’d attract people who normally wouldn’t consider taking the bus. “Currently the bus is seen as the transportation system of last resort,” Krause says.

Why did he choose Clark? “If you were to do this on Western, where the city’s planning to do bus rapid transit, it still wouldn’t be a nice street to dine on or send your eight-year-old to ride her bike,” says Krause. “Because Clark is narrow, if you did what I’m proposing you would get a world-class modern rapid-transit system in the street with nearly the capacity of a subway, at one-tenth of the cost. You would also get the most pedestrian-friendly shopping street in town. Once you remove the cars it becomes a place where anyone would want to open a restaurant, or get an ice cream after dinner and walk around, or sit at an outdoor café.”

Having created an attractive website (chicagostreetcar.com) about his proposal, featuring images of vibrant European street scenes with streetcars, pedestrians, bikes and cafés, Krause’s next step is to assemble a design team and raise money to do a feasibility study. To build excitement for the idea, Krause is currently talking to Active Transportation Alliance about possibly staging an Open Streets car-free event on Clark. “My idea is to mock up what it would be like with streetcars on Clark Street between Diversey and Armitage, using buses instead of streetcars, with twelve-foot-wide bike lanes and no parking,” he says. 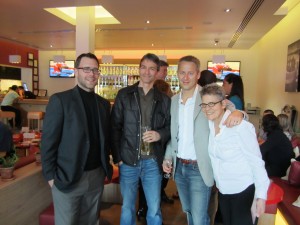 Launch party attendee Christina Liu, a civil rights lawyer, was excited about the streetcar concept. She’s ridden trams in San Francisco, Seattle, Amsterdam, Brussels and Istanbul. “The streetcars in Istanbul are great,” she says. “It’s like a very long train that looks very aerodynamic. It’s clean, it’s beautiful and it’s easy. It’s kind of as if Metra had advanced into the twenty-first century and went on the street and then made its way up Clark Street.”

Ryan Hart, who owns a sports marketing company, returned to Chicago last fall after living in Asia fourteen years. “People are so obsessed with cars here it’s kind of ridiculous,” he says. “We need more streets where you can sit at a café and drink a beer. We need community, not just cars racing down the street.”

Mechanical engineer Maurice Ball says Krause has his work cut out for him. “He’s got a mountain in front of him, because the Chicago mindset is the American mindset–we’re in love with the car,” he says. “But I admire his tenacity. You gotta start somewhere.”

Tour of Portage Park Learn about the history of this unique Northwest Side community, filled with brick bungalows and two-flats, on this guided bike tour by architecture buff Lee Diamond. Sunday, May 20, Portage Park, 4100 North Long, (773)255-6347, chicagovelo.com, 1pm-7pm; $9.