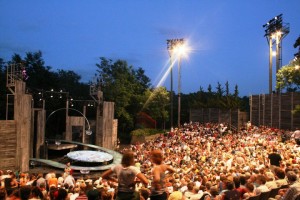 Summer 2012 begins in an unusual manner for me. Three weeks from now, I will walk across a stage on the main quad of the University of Chicago to receive my diploma. From then on, I will be expected to take my degree, my student loans and my internship experience and find some way to keep afloat. The beginning of the summer marks a dramatic change for graduates.

One week later, my family embarks on the vacation that has been the highlight of every summer since I was seven: a trip to Spring Green, Wisconsin. A few hours’ drive outside of Chicago, Spring Green is a tiny town with a surprising number of reasons to visit. The area is full of opportunities to camp, hike and kayak. Frank Lloyd Wright built extensively there, including Taliesin. The reason my family found Spring Green, though, was American Players Theatre, affectionately known as APT.

“Some families go to Disney World for vacation,” my mother likes to say. “We go see Shakespeare.” That first trip at age seven was for APT. My mom had decided to introduce me to this outdoor classical theater she’d found, and brought me to their production of “Cyrano de Bergerac.” I was enchanted. The next season, she brought me to “The Comedy of Errors” and it rained, heavily and constantly, through the entire show. I was equally enchanted under my poncho. In retrospect, I should have known that it was true love.

APT has ten years on me, but we’ve both grown while I sat in the audience. “Cyrano” was just a few years after they finally built indoor washroom facilities. A few years after I started going, they replaced the old, plush red theater seats that soaked up rainwater like sponges with gray and beige ones that can simply be wiped down after storms. I was deemed old enough to see all of the shows when I turned nine, and I survived their production of “King Lear” unscathed and enthusiastic. In 2009, APT opened a new indoor space, which finally gave them the capability to do small-scale shows. More than anything, though, I’ve grown with the actors. Some of the current Core Company joined APT before I was even born, but I’ve watched an equal number of actors do their first show, blossom as a part of the theater and then become Core members themselves. My family talks about APT’s actors as if they are old friends, though I’ve only met a handful of them. APT is more than a theater to my family, though the work they do is always of remarkable quality.

APT has always been the constant, but the family Spring Green trip alters from year to year. We toured Taliesin shortly after we found Spring Green, but it took us many years to find the cemetery where Frank Lloyd Wright isn’t buried, though an elaborate headstone marks the place where he was interred until his third wife dug him up. A few years ago, we discovered the Mustard Museum, where you can admire and taste an infinite number of mustards. The stores, the restaurants, the hotels and campsites change from year to year, but the long weekends with my family have always been enjoyable.

That’s the magic of APT. I’ve been rained on, I’ve sweated in intolerable heat, I’ve shivered under layers of blankets, but my family and I have never been willing to leave a performance due to poor weather. I’m never willing to leave at all. Every time we go, I might as well be the seven-year-old at “Cyrano,” falling in love all over again. Undoubtedly, it will happen for the hundredth time in a few weeks. In a curious, fated way, they’ve chosen for this season the Shakespeare plays that defined my senior year: “Richard III,” the topic of my thesis paper, and “Twelfth Night,” my last and dearest college production. I’m not sure if that will make them easier or more difficult to watch, coming as they do after school ends. I’ve never been far from APT, academically and personally, and this summer the closeness will be one of few certainties in a changing life. I’m sure I can depend on them.