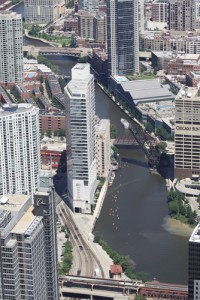 Fireworks explode overhead as a small fleet of kayaks bobs at the mouth of the Chicago River watching the show. After a few minutes, the last of the fireworks fade away to the raucous cheers of onlookers. Most of the spectators simply power up their motorboats and putter home or continue their walks on the banks of the river. The tour group from Kayak Chicago still has a three-mile paddle back to the dock.

The Kayak Chicago Fireworks tour begins at 6:45pm with a brief tutorial conducted by two instructors. This trip, it’s Hina Iwate, a small, bubbly woman, and her laid-back co-worker Brian Westrick. Iwate starts off with some stretches, and then draws a laugh from the crowd of about fifteen kayakers when she appears to break into a dance.

“This is called the ‘Elvis Pelvis,’” she says, shaking her hips while keeping her upper body completely straight. She cautions the group that keeping their hips flexible is crucial to avoiding an unexpected dip in the river. The kayakers grin, not sure if she’s being serious. After another ten minutes of instruction, everyone is more than ready to jump in the boats.

The back channel of the Chicago River is smooth and picturesque, reflecting golden light from the setting sun. The kayakers test their crafts, resulting in more than a few collisions. Iwate and Westrick remind everyone to stay to the right. They’re as careful with the group as a mother duck with her ducklings. The reason becomes clear when the kayakers reach the main channels where huge motorboats rule the waterways.

The tour goes east, following the river as it widens and winds into downtown Chicago. Squat industrial buildings are replaced by towering, luminescent skyscrapers. Motorboats and massive sightseeing boats swarm this part of the river. The kayaks are so small they almost disappear into the water. The sun sets, turning the river into a black mirror that reflects orange and blue lights gleaming from the city.  The spectacle from the kayaks is stunning.

“The big tour boats just aren’t the same,” Westrick says. “You don’t get the full experience.”

The kayakers make the three-mile paddle out to the mouth of Lake Michigan. Now everyone is grateful for Iwate’s dance lesson as the swells of the river grow and threaten to flip the boats.

When the ten-minute fireworks show is over, the boats turn and retrace their route. It seems a long way to go for such a short show, but the paddlers know the fireworks aren’t the point.

“It’s an awesome way to see the city,” says Brian. “And it never gets old.” (Jordan Bray)