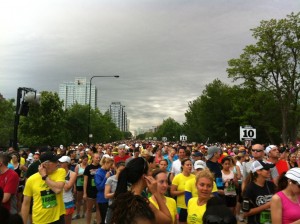 Minutes after the color of the event alert system was officially lowered from yellow (moderate) to green (low), a strong gust of wind collapsed a tent and ominous clouds seemed to be heading straight for the visibly nervous runners gathered in the sixteen starting line corrals. But race organizers knew what they were talking about and aside from a few drops of rain the weather cooperated beautifully, settling in the low seventies with refreshing winds blowing off the lake (rather than fighting participants by blowing north/south).

Starting 13,000 or so runners on any course can get crowded, but the waved starts (and splitting the corrals between Waldron and Museum Campus Drive) alleviated a lot of the congestion, as did the wide course that took off just outside Soldier Field and then headed south, quickly shooting to the west side of Lake Shore Drive before circling back around at 52nd street and following the Lakefront Trail back north.

Of course, as the advertising that entreats potential runners to “Finish on the 50!” makes clear, the race’s finale is its biggest selling point. And a memorable finish is indeed delivered. Rounding the final turn of the course before heading into the stadium, there’s the sudden burst of energy and quickening of the pulse that comes with any finish, but in this case runners are not just heading toward the finish line, they’re shooting out into the middle of Soldier Field surrounded by cheering spectators. It’s an impressive finale to a well-coordinated event.

Plenty of volunteers were on hand scattered throughout the course, especially in the stadium, where volunteers directed finishers on where to get their medals, their finisher bags and blankets and hurry back outside. It’s the kind of coordination that a race this big needs. This year’s race sold out the week before the race, but word of mouth should lead next year’s 10th annual to sell out sooner. (Zach Freeman)

Course: 5. Out and back without reusing the same course. Plus, as the marketing says, you’re finishing on the 50!
Organization (gear check, etc.): 5. Everything was impressively easy for such a large race—gear check, corral start, parking. Great organization and tons of excited volunteers.
Goodie Bag (includes shirt): 5. Uniquely colored shirt, a few flyers, and the real treat: a Fleet Feet blanket at the finish line.
Weather: 5. Low seventies, overcast and windy. Great running weather.
Overall: 5. Recommended Race. The great finish goes without saying, but Fleet Feet makes it clear that they care about their runners, ensuring every part of the race goes off without a hitch. The Soldier Field 10 Mile is a Chicago stalwart for a reason.