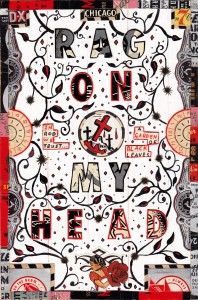 “You’re nobody (’til somebody kills you).”—Biggie  Smalls

One of the  grace notes of having kids is that they will inevitably listen to different music than you do. I once hated the stuff my father listened to—mostly big-band music circa World War II like Glenn Miller, or the jump and swing music of that era—stuff I later came to find interesting. Where My father and I found common ground was in Louis Armstrong and the music of New Orleans.

It is a little like that with my kids. My son Max used to get fifty bones a week to load my iPod—I’d write down all of the music I wanted and then he’d  add all of the things he was listening to. He likes Kanye and Jay-Z, lots of rap and jazz and soul mash-ups of every sort and he has a way of putting lists of like-spirited sounds together—in short, he earned his dough.

I  liked what he listened to, with a few exceptions, and he liked some of the stuff I listened to. It is one of the things he and I can easily talk about and enjoy together.

For about the past year, my son and his pal Ashkon, who works for me, had been playing the mix tape of a young rapper named Rodney Kyles Jr. A song on this mix tape had been rattling around in my head for months: “Rag On My Head.”

It is at once hypnotic, droning and mesmerizing. It’s an incantation to a better world, yet at the same time, a world-weary affirmation that young Mr. Kyles knows exactly how the world sees him. In Obama’s “post-racial” America Rodney Kyles knew that to be young, male and black in America, to be at the opposite end of economic advantage, is to be in exile. His raps are less angry, and more cynically resigned to this idea. Unlike a lot of rap, Rodney Kyles Jr. was not the least bit naive about what this supposed post-racial culture had left him and his crew.

If this seems like a  cynical or hopeless statement, look at the stats for young black males in America and know that more young black men go to prison than to college.

These are ugly, sobering truths and “In Rod We Lust,” Kyles’ first and last musical will and testament, his rhymes are shot through with these icy truths. There is something edifying about one who sees the world for what it is.

A young man able to shut out the giddy noise and the feel-good bromides about America, and realize there is still much inequality and inequity, and that he is an inhabitant of a world and city still encoded by class and skin color.

I wish I could ask Rodney Kyles Jr. about this—I can’t. In September of last year, he was stabbed to death in Lincoln Park. He and another man bumped each other on a sidewalk on the 1100 block of West Wrightwood after a party. Words were exchanged, and the other man, described as white, blond and six-foot-three, pulled a knife and stabbed Rodney Kyles twice.

This happened in front of several witnesses. Nobody has ever been arrested for this. It is easy to become cynical about crime in Chicago. Rahm Emanuel, for all of his puffery, has done nothing to curb violent crime—nor has his new police chief, Garry McCarthy. These guys love their stats. Almost every homicide of a young black male gets thrown into the “gang violence” bin. Well here is a newsflash: Rodney Kyles Jr. was not part of a gang, as synonymous as rapper may be with gang-banger to the police. Rodney Kyles was a college student. A kid who hung out with filmmakers, skateboarders and artists, rather than bangers.

Eyewitnesses to  Kyles’ killing told other kids—including mine—that the police were in no great hurry to summon an ambulance that evening. One wonders if this would have been their attitude had Kyles been a white youth bleeding to death in Lincoln Park.

I know of him because he was a friend of my children. They tell me he was a charismatic, if troubled, guy who was the leader of an assemblage of aspiring rappers and skate artists that  went by the moniker of “Scoom Squad.”

At the time Kyles was a student at Roosevelt University studying philosophy and history. In the mix tape he left on the Internet, it’s obvious  Rodney and the Scoom Squad had a taste for rebellion, and they also had some deep questions about America, the world and their place in it. There is a  gritty intelligence and wit at work in Rodney Kyles’ songs. As far as I know, he’d never performed any of these songs. He was at the beginning, and from what he left behind, I feel like he’d have gotten somewhere. These are a collection of unpolished  gems that are as filmic as a Melvin Van Peebles film or an Iceberg Slim novel.

Kyles’ ability to build atmospheric layers with nothing but voices is uncanny and dramatic, and at times, the songs are as howlingly funny as they are pitch dark. There was a musically and socially percussive mind at work here, and when one hears this collection of jams, one cannot help but mourn the songs this young man will never write.