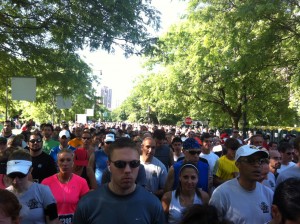 I’ve spent many mornings running through Lincoln Park Zoo on my own, but it was much livelier today with race organizers and volunteers bustling around to smoothly coordinate things for the more-than-3,000 runners (both 5K and 10K) picking up their bibs and race shirts, snapping pictures of the seals and big cats and generally admiring the zoo that the United Run for the Zoo is organized to benefit. The inclusion of a free kids-only event (the Rhino Rush) added a pleasant family vibe.

By 7am, the temperature was already in the high sixties and runners were gathering in the starting corral at Stockton and Webster. Organizers were a little optimistic about running speeds, leaving the same amount of space for the five-minute and six-minute pace corrals as they did for the seven-, eight- and nine-minute areas. The result (for both the 5K and 10K) was a good twenty-foot gap of empty street between the starting line and the first runners that no one was bold enough to cross until a few seconds before the kickoff of each run.

The decision to start the 5K runners twenty minutes before the 10K was smart, not only putting plenty of distance between the two running packs, but also allowing for a clearer finishing area. But the newly designed course, which did allow for more running through the actual zoo grounds, had a major flaw. In the tight space between the turnaround at Waveland Park and Belmont Harbor, it was unclear whether the course crossed back over itself or whether southbound runners should stick to the left side of the trail, resulting in confusion and risky course conditions. For a race this big to include such a poorly defined portion of the course is unexpected, especially when that section also inconveniences unsuspecting runners and bikers who aren’t part of the race.

Spectators in the zoo and popsicles at the finish line were a huge boost on a warm race day. (Zach Freeman)

Course: 3. The half-mile or so where you run through the zoo is exciting and well-mapped, but the lake-shore part of the course between Waveland Park and Belmont Harbor was a confusing mess.
Organization (gear check, etc.): 5. Race-day registration, packet pickup, gear check and the starting line were all running smoothly.
Goodie Bag (includes shirt): 4. Just a shirt. But it’s a really nice shirt (both design- and quality-wise).  United sweatbands were passed out before the race.
Weather: 4. Low seventies and sunny. Great to begin with but felt a little hot by the end.
Overall: 4. Recommended Race. The change in course design was a bad decision and should be rethought. But the run is well-organized and walking through the zoo before and after is a real treat.