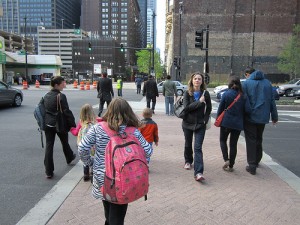 This year when you walk to the Printers Row Lit Fest it’s a little less likely you’ll be killed by a car. The Chicago Department of Transportation (CDOT) is currently wrapping up the $18 million Congress Parkway Reconstruction Project, from Wells Street to Michigan Avenue. The rehab has already brought a slew of pedestrian safety improvements, including new “pedestrian refuge” islands, making it safer, easier and more pleasant to walk across and along the massive street that forms the southern boundary of the Loop.

Construction on Congress Parkway began in October 2010 and the road reopened to traffic on May 15, just in time for the NATO summit. CDOT expects the final tasks, including finishing planter medians and installing decorative trellises and lighting, will be done by June 30.

Congress has long been an iconic Chicago street, but it has also been a major barrier to foot traffic. Originally called Tyler Street after tenth U.S. President John Tyler, the name was changed to honor the U.S. Congress after Tyler became unpopular because he joined the Confederacy during the Civil War. The road originates as a freeway at the Circle Interchange, the junction of the Dan Ryan, Eisenhower and Kennedy Expressways, and then continues east to become an eight-lane surface road at Wells Street, dumping high-speed traffic into the street grid.

Before the rehab, the zooming cars, dearth of pedestrian facilities and abundance of grim buildings along Congress, like a Brutalist parking garage for federal employees and a windowless AT&T building, discouraged walking trips. But CDOT project director Janet Attarian says the agency did a number of things to improve safety for pedestrians and motorists alike, as well as making it a more appealing street to stroll.

“With the roadway itself we made a lot of moves,” she says. “The first one is that Congress is not actually a straight line in terms of true east to west. It sort of slowly shifts to the north as you go east. And so that was always a problem because the intersections did not always align completely, which led to a lot of accidents. Essentially we took the string and pulled it tight so that everything lines up and all the lanes are a consistent ten-feet wide.”

By tightening up the layout and improving the locations of left-turn bays, CDOT was actually able to remove a travel lane between Clark Street and State Street, widening sidewalks without impacting motor-vehicle travel times, Attarian says. “There are more than 60,000 cars on Congress a day and we had to actually design for [Year] 2030 traffic, which of course always gets bigger, never smaller.”

East of State Street, Congress narrows to six lanes, so unfortunately there was not enough room to provide pedestrian refuge islands there, Attarian says. In fact, when this section was originally widened in 1952, the city removed existing sidewalks and forced buildings like the Congress Hotel and Auditorium Building carve out part of their first floors to create pedestrian arcades. “There was this beautiful Louis Sullivan bar in the Auditorium Theatre that they had to rip out,” she says. “And if you go there and you look at the back side of the columns supporting that façade you’ll think, ‘Oh they’re all rough-cut and unfinished.’ That’s because they used to be inside the building and so they were never meant to be seen.”

West of State, the new refuge islands make it possible to cross the wide street halfway, then safely stop and wait for the next light cycle, which will be helpful for seniors, families with small children, and people with disabilities. In addition, CDOT added countdown walk signals at all the intersections and timed all the signals to give walkers one second for every 3.5 feet of roadway width. “Before, some of those traffic signals didn’t even have ‘ped heads’ [walk signs] at all, never mind countdowns,” Attarian says. “And many of the walk signals were not long enough for anybody but a really moving human being to get across Congress at one time.”

The agency also built broad, high-visibility red-brick crosswalks, and the wider sidewalks along Congress provide space for large planter boxes that will help protect people walking down the street. “We did, wherever we could, create a barrier between moving cars and pedestrians, because Congress doesn’t have any on-street parking,” she says.

The project also includes well-timed stoplights for drivers. “From a pedestrian perspective you might think, ‘Well that helps the cars,’ and yes it does, but it also helps pedestrians,” Attarian says. “The lights are timed to thirty miles-per-hour, so as much as people think it’s still Congress and people are still driving fast, it’s slower than they were going before, when people had the ability to get up to fifty, sixty miles per hour. You can’t do that on Congress now, or if you do, you can do it for a block and then you’re going to come to a red light.”

Although the Tribune’s Jon Hilkevitch reported that the rehab incorporates “better bike lanes that require less weaving, and bike parking,” Attarian says it includes neither. “He totally made that up because there are no bike lanes on Congress, there never were, and we had no intention of making bike lanes,” she says. “I think he confused them with vehicle lanes. First of all, there’s no room for bike lanes. We’d have to eliminate another travel lane which, while I would love to do that, but from a capacity perspective there was no way we could.”

Folks are already taking full advantage of the pedestrian facilities. Last Friday, as I hung out at Congress and Dearborn after work watching people traverse the new crosswalks, I noticed two guys standing in a refuge island talking for about ten minutes. Joe Guidice, a building engineer at the nearby Wyndham Hotel, had been heading north on Dearborn to pick up some dinner. Matt Radtke an engineer at the Dirksen Federal Building, was walking south to his car, and the two colleagues met up like the north-going and south-going Zax in the Dr. Seuss story. “We just bumped into each other and felt comfortable enough to hang out here,” Guidice said. “It doesn’t even feel like you’re standing in the middle of a busy street.”

Streets for Cycling Open House Check out a draft of the Citywide 2020 Network, a system of 640 miles of bike routes to be established over the next eight years, and provide feedback to city staff. Saturday, June 9, lobby of 77 South Dearborn, facebook.com/streetsforcycling2020, 10am-4pm, presentations at 4:30pm & 6:30pm; free.

Bike-in movie at the Hideout The music venue hosts an outdoor screening of “Talking Heads: Chronology,” which brings together live performances from across the career of this band fronted by cycling advocate and “Bicycle Diaries” author David Byrne. Sunday June 10, The Hideout, 1354 West Wabansia, (773)227-4433,  hideoutchicago.com, 8pm; free.