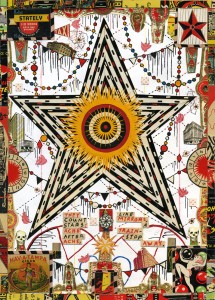 There are lots of ways to learn history—you can read the books, pull up the old newspaper accounts, watch PBS—and oftentimes what we come away with are the lies we’ve all agreed upon. History is a funny word—in my own lifetime there have been the brazen public assassinations of  a president, rock stars and civil rights leaders—and all of the witnesses seem to tell a different story of the same event. We think of history as something that happened  a hundred years ago, or ten years ago. This is wrong; like evolution—another funny word—it is happening now, as we speak and we change incrementally because of it. The transcendent moments happen as much in the  mundane day-to-day as they do in times  of  conflict and controversy. It was our good fortune that we had Studs Terkel around to help parse this.

In the past couple of weeks there have been many celebrations and memorials and much testimony  to Studs. I cannot think of a more necessary Chicagoan in all of our history.

I am hardly impartial. He was and is my hero. He helped shape the way I see the world, my community, my city and my nation.

He taught me that everyone mattered, that we are our brother’s keeper—that injustice prevails when good people do nothing.

In his ninety-six years, every time there was occasion to be on the right and just side of an issue or a movement, there was Studs. The WPA? Civil rights? The blacklist, women’s rights, workers’ rights, gay rights?

Studs supported all of these causes and, in each case, did so long before it became popular to do so.

He paid mightily for his principles; he was blacklisted in the early fifties for refusing to sign a “loyalty oath.” It kept him out of work and labeled a “pinko” for the next decade or so.

Did Studs back off?  Not on your life—he never met a petition he didn’t like and continued, loudly, to inveigh against institutional racism and intolerance and began to pick up jazz  DJ work.

It was our good luck, here in Chicago, that WFMT hired Studs—and for the next half-century—forty-six years actually, but let’s round it off—every morning at ten o’clock, Studs Terkel dignified the medium of radio with interviews, conversations, music, stories and an unvarnished look at the world we found ourselves in.

If you get a chance, stream some of the interviews through the Chicago History Museum’s website—all of Terkel’s interviews have been digitized to preserve them “Vox Humana: The Human Voice.”

There are some  real gems in this  immense collection—Studs interviewing the purposefully evasive young Bob Dylan, who tries his damndest to remain shrouded in mystery, but is so interested in Studs that Dylan starts interviewing Terkel.

Marlon Brando, the same way… As much as Studs liked to talk, he was an exquisite listener—and during these interviews he only occasionally interjects with a salient comment or question—he lets history go where it will take him.

Don’t miss an opportunity to hear some of these great  stories.

It is fitting that we at Newcity celebrate Studs in our literary issue—if ever a guy belonged among the best of a city’s stories it is he.

In all of Studs’ myriad of lifetimes—it is important to remember what a fine writer he was as well.

His political enemies would, to no avail, try to dismiss him as a “tape-recordist”—no doubt resentful of the esteem real writers and authors held Terkel in. One needs no more evidence of Stud’s fine prose than his long forgotten 1986 book “Chicago,” a lovely, elegiac testimony to his city or “Touch and Go,” his memoir written in the last two years of his life, a life so full even Studs couldn’t get it all into one book. A year later came “P.S., Further Thoughts from a Lifetime of Listening.” Both were published to rave reviews from the New York Times.

I was fortunate to  know Studs for thirty-one years. People will often tell you not to meet your heroes—that very often, the reality is disappointing. Not so in this case—when I met Studs he was even more interesting in person and more fascinated by the human comedy that surrounded him.

Remember to listen to some of those interviews. “Vox Humana”—the human voice—none more so than his.