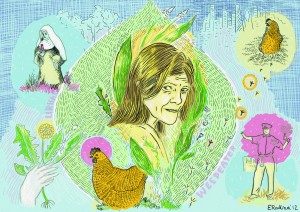 We sit cross-legged on the trail in Douglas Park. Across the road is Mount Sinai hospital with its famous trauma center, where people are often treated for gunshot wounds that they receive in this very neighborhood. Somewhere nearby a car stereo is cranked up to the top level, playing angry rap. Meanwhile, Nance Klehm takes a patch of dry mugwort from a black plastic bag that she carries with her, carefully places it on the cracked asphalt surface, and sets the herb on fire. While the dry plant burns and smolders, emanating a bitter-sweet aroma, Klehm explains that we are making an offering to the land, a ritual traditionally done by herbalists before they start picking plants. Once the fire dies down, she reaches into her black bag one more time and takes out a pair of ordinary red gardening scissors. We are ready to start our foraging trip in the heart of Chicago.The term urban foraging can have two different meanings. One, typically used by freegans, is to find various goods for free in urban areas, “creating value from trash.” This includes looking for discarded goods in neighbors’ dumpsters—dumpster diving. While rummaging through someone else’s trash may promote a commendable “reduce, reuse, and recycle” ethic, many consider it too dirty and distasteful.

Another meaning of urban foraging exemplifies the lifestyle of Klehm—an herbalist, radical ecologist, designer, grower, writer and educator.  Klehm gathers edible and medicinal wild herbs, berries and mushrooms for food in city parks and along city streets. One of Klehm’s main principles is to pick only weeds: plants that were not planted or cultivated by people (at least not recently). For her, it has the philosophical significance of connecting with the earth and the natural world. It is also quite practical. “I was recently leading an urban foraging tour in a park in Los Angeles,” recalls Klehm. “We were approached by the police, but I explained that we only gather weeds, something no one wants, and they left us alone.” But sometimes Klehm is not so lucky.  For instance, in Copenhagen, Denmark, local police were upset by her picking of public weeds, and escorted Klehm out of the park.

Although she admits that many people who see her foraging in city parks think she’s crazy, she strikes me as a practical and extremely knowledgeable woman with a sense of humor.  She seems to know every single plant that we see by both its common and Latin name. Nance Klehm is a fifth-generation horticulturalist who has taken herbal apprenticeships in Wisconsin, an herbal study at the East West College of Herbalism in California, and lectured, among other places, at the Museum of Contemporary Art, Northwestern University, the Hammer Museum in Los Angeles and the University of Chicago.

“I started urban foraging because I was feeling lonely in a big city,” says Klehm, who grew up on a farm and came to Chicago to work at the Field Museum after earning a BA in archaeology. “Life in Chicago seemed so stressful, I was overwhelmed, and needed something quiet to do, something to calm me down. I started looking at the plants that grew along the train tracks, and identified many of them as medicinal or edible. It was amazing. Collecting weeds gives you so much. It encourages you to see the world around you much fuller.  You slow down, become attentive, and start noticing the birds and animals. It also serves to enrich and broaden your palate. No cultivated plants have such subtle and sophisticated tastes as the wild ones.”

We walk, crawl, sit on the ground, inspect leaves and stems, and occasionally eat them. I regret that I put on a nice pair of pants for this foraging trip (Klehm is dressed in comfortable shorts and a T-shirt, her hands still bearing traces of earth—she’s been working in her garden all morning), but that’s my only regret for today. Part of our route goes around the golf course, but fortunately it is now devoid of golfers. I am amazed by the variety of plants we find on the small patches of unmanaged shrubs surrounded by immaculately mowed golf lawns, and surprised at how tasty many of them are. Who would think that the leaves of violet would taste just like lettuce, or that the stem of thistle is as juicy and rich in taste as celery? I discover that the leaves of yellow wood sorrel, shaped like little hearts, have a refreshing sour taste, and the tendrils of wild grape are sweet and look exactly like butterfly’s antennae. While we are chewing on some fresh leaves, Klehm treats me to dandelion root coffee she made at home and brought along in a glass jar. “It kind of tastes like earth,” she warns when I take my first sip. It does taste like earth. To my surprise, I realize that I like that taste a lot.

There is one more thing that surprises me in our foraging session. I already know the names of a lot of plants that Klehm shows me. Not their English names, but the Russian equivalents. I grew up spending summers in a small Russian village where my grandmother lived, and it was common back then to use wild herbs in preparing food, both for people and domestic animals, and in making medicines. In the Soviet Union there was a limited variety of products available in the stores. Picking wild plants, nuts, fruits and berries, as well as growing crops in small summer dacha plots, was a common, practical thing to do. It also was a family activity, a ritual we all loved and enjoyed. When anyone got sick, herbs were preferred over drugs. If I had a sore throat, I would gargle a solution of calendula flowers. If I cut my finger, I would put a leaf of plantain on the wound to heal it faster. In winter we would eat homemade pickles, preserved tomatoes, marinated wild mushrooms and jams made of the berries we picked in the forests in summer.

When the Soviet Union collapsed, along with a wild version of capitalism Russia got supermarkets, their shelves filled with canned and packaged goods. Homemade preserves became something old-fashioned and obsolete, and even if you still liked them, you kept it to yourself if you wanted to appear modern and hip.

When I share my experience with Klehm, she sighs. Her friend from Poland told her a similar story, adding that all her friends are now elderly women, because they are the only ones who know the secrets of the wild plants. “I live in a diverse neighborhood, with a big Hispanic population. Because my neighbors are immigrants, they know a lot about herbs,” says Klehm. “Once I was sitting on my porch and saw a hand stretching into my garden and grabbing the flower of one of the plants I grow there. I said, ‘Hello there!’ and heard a shriek. It turned out that the hand belonged to my neighbor, a Catholic nun from El Salvador. I gave her two medicinal plants that she needed. In return, she brought me two live chickens—a hen and a rooster. Now I have a flock of hens at home and enjoy eating fresh eggs.”

Klehm explains that a lot of people in her community treat her as an herbalist and a medic. According to tradition, whenever someone asks you for a curing plant, you cannot say “no.”  In return, this person gives something to you. “When I go on my foraging trips, I often see people from the neighborhood—Chinese, Polish, Italian, Greek—picking certain plants too, or just looking at me with knowing faces and saying something like, “Oh, I know what you are doing, I know what this plant is for.” Klehm discovered one more benefit of foraging: It works as a community-binding mechanism, encouraging people from different countries who speak different languages to understand and respect each other.

Our foraging trip is over, and Klehm jumps on her bike and waves goodbye. I walk to the L station and sit on a train with a bunch of plants and leaves I collected in the park. I am not sure they serve to bind me with my neighbors on the train. They look at me suspiciously as I try to figure out how to make the stems of ground ivy (helps with headaches) not stick out of my bag too much and try to find the right space to store the dry stem of dogbane, a poisonous plant that, when dry, makes a great rope.

Once at home, I cut the leaves and stems of wild radish that taste exactly like wasabi sauce into small chunks, add a boiled egg and some olive oil, and serve it as a salad for dinner. My husband resists a little before he tries a small bite, and then helps himself to a full serving, saying that it is actually tasty. “Where did you pick it again?” he asks. “Maybe you can get some more of it.” I don’t know if I feel like going back that far, all the way from Evanston to Douglas Park, to pick a weed, even such a great-tasting one. I have yet to convert into a real urban forager, and I still prefer to get my dinner at Whole Foods rather than the city park. But now, when I go for a walk, I cannot help myself from looking around and seeing tons of edible plants. Many are just the same as in Russia, but I only notice them now. I do not rush to pick them, but the knowledge that they are there makes me feel more at home.

greetings, I happen to live in chicago and is interested in foraging. I was wondering if you could provide me with a list of plants to pick. currently on a research mission gathering information so I can prepare for the gathering of plants I may need for the healing of others. I dont know why but I’ve been surrounded by a bunch of sickly people. I know that herbs will heal these ailments but I just cant find out what exactly is available growing wild or things I might want to put in a couple of gardens. Will be eagerly… Read more »