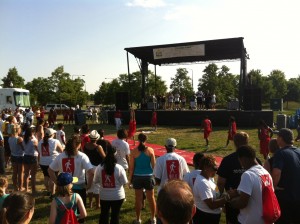 For a race in its first year, Run Home Chicago attracted a lot of recognizable names. From Secretary of State Jesse White and the Jesse White Tumblers performing before the race to Illinois congressman Aaron Schock (declared last year by Men’s Health to be “America’s fittest congressman”) participating in the 10K to Andrea Metcalf acting as pre- and post-race announcer, it was an impressive lineup.

On Waldron Drive just south of Soldier Field, the heat was rising into the eighties as the 8am start time for the 10K neared, which may have affected turnout, but organizers and the roughly 150 participants kept the energy high. The much larger 5K (including several hundred runners and walkers) kicked off fifteen minutes later, following the same southbound course on the Lakefront Trail, which did present a bit of an issue.

It’s certainly clear why an inaugural race planning for a relatively small turnout would opt for a double-loop out-and-back course design; this setup not only allowed for a single water station to serve runners several times during the run (10K participants passed the same spot four times while 5Kers passed it twice) it also meant fewer volunteers were necessary to cover the entire course (a few at the water station, the turnaround, and the finish line) and one course could be used for both distances. But while this situation may have been ideal for race organizers it made for a rather crowded course, especially once the course was filled with both 5K and 10K participants. Opting for a simple 5K would have been a better option.

The finish line was well-supported, with brave spectators enduring the weather and food from America’s Dog, Swirlz Cupcakes and Home Run Inn Pizza making the post-race party tastier. Organizers clearly know what they’re doing, especially when it comes to fund-raising and involving those who can make a difference. For next year, they should focus on improving the course. (Zach Freeman)

Course: 2. Out-and-back double-loop on the Lakefront Trail. Got too crowded with 5K and 10K participants (particularly around the water station).
Organization (gear check, etc.): 5. Quick day-of registration and well-coordinated gear check. LOTS of great post-race booths and a big stage with music and impressive familiar faces.
Goodie Bag (includes shirt): 3. White cotton shirt—but abundant giveaways at the race compensated.
Weather: 3. In the low eighties by start time. Hot.
Overall: 3.25. Recommended Race. The course needs some adjusting but weather is uncontrollable. Organizers this year focused on getting the word out and making the race into an event and succeeded on that front.