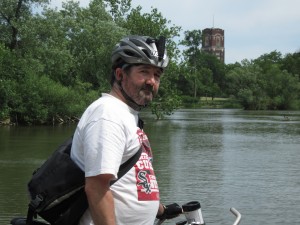 “Nelson Algren wrote, ‘It isn’t hard to love a town for its greater and its lesser towers, its pleasant parks or its flashing ballet,’” says Algren scholar Bill Savage, strapping on his bicycle helmet. “‘But you never truly love it until you can love its alleys too.’ So there’s this dynamic in the city between the boulevard and the alley, between the beautiful urban spaces and the place where the garbage and the rats are, and if you really love Chicago you’ve got to love both.”

An English lecturer at Northwestern University, Bill grew up in Rogers Park with his brother, sex advice columnist Dan Savage, and still lives in the neighborhood. “I tell my students, it’s very easy to experience the city secondhand, in books and movies and online,” Bill says. “But if you’re not out there on the pavement, whether on foot or on a bicycle or in a car or on public transportation, you’re missing something.”

With that in mind, Bill’s invited me to join him on the roughly twenty-five-mile bike commute he does every week or so from his girlfriend’s house in suburban Evergreen Park back to Rogers Park. This epic ride crosses the entire city from the southwest corner to the northeast, and he’s devised a mostly backstreet route linking many of his favorite parks and historic landmarks. “It makes it a mile or two longer, but it’s much more pleasurable this way,” he explains.

We meet up at Metra’s Beverly Hills-91st Street station on a scorching Memorial Day Monday. Pedaling west a mile on 91st takes us into Evergreen Park, a town of about 25,000 that’s the hometown of  “Cheers” star George Wendt and Unabomber Ted Kaczynski. We turn north on California, passing by Norris Field, a Little League venue where monk parakeets nest in a cell-phone tower. Crossing 87th we’re back in Chicago’s Ashburn neighborhood, and we soon come to St. Thomas More Church, with a soaring bell tower and a striking bas-relief of the English saint. 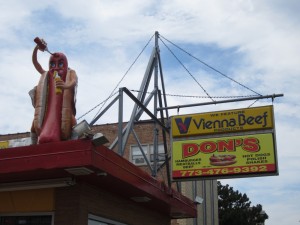 Heading north on California again, we pass our first cocos frios and elotes (coconut juice and corn) carts at 55th. It’s roasting by now and Bill recalls, “I was taking this route one time and some guys who had a hydrant open sprayed water at me. They missed, so I went back and said, ‘Otra vez’ (‘One more time.’) They nearly knocked me off my fucking bike, but it cooled me off. It was a South Side baptism.”

By a Tastee Freez at 44th we turn east then head north on Campbell, a leafy side thoroughfare where people are hanging out on stoops. We turn east onto Pershing then come to McKinley Park. As we roll northeast on paths through this pretty green space where many families are barbecuing and playing soccer and sixteen-inch softball, when children cross our path, Bill calls out “Cuidado, niño” (“Careful, kid”). Pausing by the park’s tranquil lagoon, Bill points out a red brick “Industrial Gothic” building to the south. “This park was designed to look like nature but there’s this tower in the background reminding you that you’re in the city,” he says. “You never really get away from the man-made environment.”

Emerging at 37th and Damen, we continue east to Paulina, then north to 35th. We break for lunch at Johnny O’s, 3465 South Morgan, an old-school hotdog stand where Bill buys me a Mother-in-Law, a Chicago-style corn-roll tamale on a hotdog bun with chili. From there we head north on Morgan, passing by a number of hip establishments that Bill views as signs of gentrification: the Co-Prosperity Sphere gallery, Bridgeport Coffee, Pleasant House Bakery and Maria’s Community Bar.

Turning east on 31st, north on Throop Street and east on 29th, we come to Palmisano Park, formerly Stearns Quarry, featuring a rustic fishing pond and a thirty-three-foot-high hill with a stunning view of the skyline. “Again, I love this place because it’s a combination of the built environment and the natural environment,” Bill says. “You can see smokestacks and churches nearby and hear the traffic on the Stevenson Expressway. But the birds, bugs, plants and animals that live here don’t care about that.” 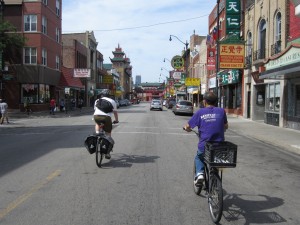 Exiting the park we’re at 27th and Halsted and we roll north, then east onto 26th, past Irish-, Italian- and Chinese-American establishments. After jogging north on Canal Street, we turn east onto Bill’s “secret route” to Chinatown, a short stretch of 25th Place sandwiched between the Stevenson and the Kennedy Expressway. Rolling north on Wentworth, we come to the red, gold and green signs and pagoda-style roofs of the business strip and overtake an old man pedaling with a milk crate tied to his rear rack. Continuing west on 22nd Place, we visit the Chinese Community Center, 250 West, with a statue of Confucius.

Cruising up Princeton, Tan Court and Wells Street, we come to Ping Tom Park, a lovely riverside green space, then head east on 19th. Rolling north on Wentworth then east on 18th, we arrive at the Henry B. Clarke House, 1827 South Indiana, the white clapboard structure that’s Chicago’s oldest surviving home. Bill tells me the house’s watchtower served as a lookout for fires and Indian attacks.

We backtrack on 18th to Wabash and pedal north with the steely blue Trump Tower visible in the space at the end of the street. “That used to be emptiness,” Bill says. “Now it’s got a punctuation mark.” We turn west on Roosevelt, broiling as we ride into the late afternoon sun, then take Canal north into the West Loop, relatively deserted because of the holiday.

A friend of Bill’s calls to invite him to the Hopleaf bar in Andersonville. We’re in familiar territory now and eager for some cold beverages, so we stop sightseeing and hurry northward. We take Fulton Street, Desplaines and Milwaukee up to Halsted, and zoom through Old Town, Lincoln Park and Lakeview. Cheering erupts as we pass near Wrigley Field, where the Cubs are coming from behind to beat the Padres. 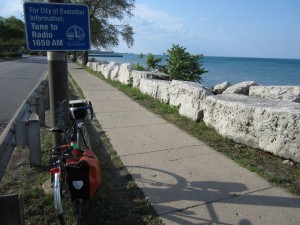 We roll west on Lawrence, passing by Uptown music venues like the Aragon Ballroom, The Kinetic Playground, The Riviera and the Green Mill. As we turn north on Magnolia Avenue and ride behind the shuttered Uptown Theatre, Bill points out a spot on the fire escape where peregrine falcons sometimes nest. Heading west on Argyle Street to Clark Street, we soon pull up to the tavern.

Bill’s staying here with his grizzled drinking buddies, but I’ve decided to pedal a few more miles to the Evanston border near Juneway Terrace Beach, where I’ll strip to my shorts and jump into the icy cobalt lake. Before parting ways we toast our trip with pints of Daisy Cutter, and I ask for Bill’s final thoughts on our journey. “There are two choices for getting places, the direct way and the informative and aesthetic way,” he says. “We should keep that in mind whenever we move around the city. And thank God for whoever invented air conditioning and cold beer.”

Chainlink Bar Night Meet up with some of the 7,000-plus members of the local bike social networking site for drinks and dinner. Thursday, June 21st, The Spot, 4437 North Broadway, thechainlink.org; 8pm-11pm; free.

Bikes and Beers for a Bright Tomorrow Show your helmet at this fundraiser for the Academy for Global Citizenship charter school to get a free ticket for the bicycle-centric raffle. Wednesday, June 27, Bar DeVille, 701 North Damen, tinyurl.com/bikesandbeers, 7pm-10pm; free.

The L.A.T.E. Ride Join up to 10,000 cyclists for this annual after-hours bike ride through North Side neighborhoods and along the lakefront, benefiting the Friends of the Parks advocacy group. Sunday, July 1, Buckingham Fountain, 500 South Columbus, (773)918-RIDE, lateride.org, 1am; $40-$45.