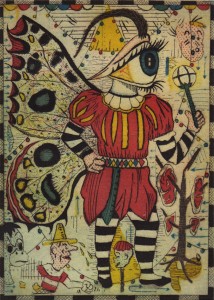 In the last few years, the City of Chicago has inched closer and closer to the Big Brother mentality of which Orwell warned us. The cops and the mayor can’t do shit about the twenty or so people shot on any given weekend this summer, but blow a yellow light or roll through a stop sign—and the city is up in your crevices like sand.

There are cameras every fucking-place… except where the homicides are happening. Chicago is rabid for its bicycle lanes, and 5K runs, and making sure the retail end of town is spiffy—the “quality-of-life” horse shit the former mayor went on about ad nauseam. This is the guy who needed flower pots in the middle of Ashland Avenue. You know what I need from Ashland Avenue?
Cheap shoes and good burritos, Skippy—that’s it.
Now ambulances have a hard time getting down Ashland in high-traffic volume hours. I’d not be surprised if all of this beautification made the city less safe.
The cameras are really a bite in the ass though—it is another of the city government’s nauseating nickel-and-diming of its citizenry to death. This and the dipshits in the neon vests who pretend they’re cops and hand out parking tickets even when there has been no infraction—don’t tell me these mouth-breathers don’t have quotas either.
It used to be a more pleasant city, less predatory and punitive in its leveeing of fines for petty bullshit.
It seems to have infected us as well. Every swinging dick in the village has a camera, every cell phone. Every simpleton act now seems worthy of recording, just because you have a cell camera. At my gym I saw one guy filming another guy while he shaved his sack… Really? You really want to have a home movie of that?
Or the people who take pictures of their food to send you on Facebook—people who are not chefs, people with earth-shaking messages to share with the world like : “I ate a muffin.” How nice for you.
Or the newly proud parents who send you little films of every drool, dump and upchuck their newly hatched offspring emits, because it is all so adorable. It isn’t. Knock it the fuck off.
It is us filming us—the sidewalks clogged with assholes holding their cellphones over their heads at the sight of anything they deem out of the ordinary, or a bunch of shit-kickers from Bettendorf, Iowa stopping foot traffic to get a shot of : “All of the traffic—jeez, they won’t believe this back in Bum-Fuck.'”
The cameras are everywhere, except where they are needed. The cameras snuck in on Daley’s watch as a revenue-getter and yet another way to butt-surf residents of the city. There are a lot of studies being done that suggest they’re barely constitutional, saying the average citizen has a reasonable expectation of privacy even walking down the street. But that doesn’t seem to bother anyone in government here. Only civil libertarians are screaming about it. The sad truth is, we are stuck with them and probably less free because of the unblinking eye.
And there is no way to turn the chicken shit into chicken salad. In fact these draconian security measures entreat less trust between us and the pork-swords who govern us—always whittling on our dicks for more, more and more. For less safety, less freedom and less community. They do not care, the place for them to stand is balls-deep in your tax money with their friends, cropping the spoils.
Here is a 911 for them:
Twenty people were shot in our city over a couple weekends ago. Six of them died. These totals are down from the weekend before. Most of them were children.
Not that any of us want to see film of this. No. We’d be happier seeing cops walking beats in these neighborhoods. Have the high-crime areas on Compustat and flood the neighborhood with Blue: Cops on foot, cops on bikes, two-man patrols.
Let the assholes know you’re watching them and taking notice in the most aggressive posture possible.
I was impressed by the restraint Police Chief Garry McCarthy used at the NATO protests a few weeks back. It spoke volumes that he was present, on the ground, face-to-face with protesters, and urging calm among his men.
He is right about one idea: You lead from the front. Now it is time for all of these cameras and witnesses to do some good.
Put cops where the cameras cannot look. Focus law enforcement on the gaping wounds and not the mosquito bites. Hire officers of color to work the neighborhoods where white officers might be the subject of distrust. Let children see someone who looks like them upholding the law.
Serving and Protecting.
Make sure they are present, flesh and blood, and maybe with a smile—unlike some camera perched high on a pole. Instead of cheap, inhuman surveillance—bear witness to the city.