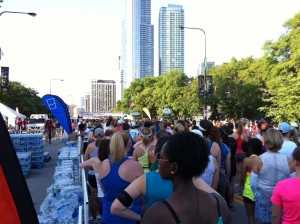 Did this being a women’s only event make it feel different than previous races?

For sure. With finisher awards for the top three sister duos and mother/daughter duos, they made you well aware that it was a lady party. Of course, those weren’t the only signals. There’s also the pink yoga mat and floral finisher medal (which also happens to resemble a Chinese star, making you feel equal part feminine and badass). And I thought it was cool to be a part of a race where the first place finisher was a female. Gender breakdowns were irrelevant.

What about along the course?

I wouldn’t say that there was any more runner camaraderie at this race than there is at any other race. Those in the running community tend to be both supportive and grateful people; runners cheering on and congratulating each other, thanking spectators and volunteers for their kindness. I suppose it was nice to hear spectators cheer, ‘Nice job, ladies!’ or ‘You’re looking great, women!’ You always knew they were referring to you.


I noticed the starting chute didn’t start filling up until relatively close to race time. Are men the ones driving the early fillings at other races?

Actually, come to think of it, I’ve never been a part of a race where there were so many participants standing in line for the bathroom less than ten minutes before the official start time! I guess us ladies were living up to our stereotypes at that point. We were showing the world that it will have to wait for us to ‘finish getting ready’ no matter how long we take to arrive.

Race Breakdown:
Goodie Bag: Over the years goodie bags have less goodies and more soon-to-be-recycled flyers for other races, coupons, etc. So it wasn’t a surprise to receive a bag that contained such things plus one mini Luna bar. It WAS great, however, to score a well-designed running tank and a (girly) yoga mat you could pick up post-race. The race tank is black, which is a little impractical for the summer, but the logo and sleeveless design is appealing. The organizers and event sponsors invested money on the right kind of goodies.

Weather: The temperature was in the low eighties for the majority of the race, becoming only more severe as the day carried on, so the later finishers bore the worst of the heat. The heat certainly would’ve been more manageable had there been more frequent water and misting stations along the course. Two weekends ago I ran another hot half-marathon and they had twelve water stations (really just six on an out and back course), lots of misting stations and even ice chips. That experience showed me that heat can be beaten.

Organization: The race seemed well organized. A number of options for days, times and locations made packet pick-up a cinch. I was expecting to wait in an enormous line to receive my yoga mat but that was quick too. The portable toilets (though sparse) were conveniently located adjacent to the course. And despite many participants arriving to the corral less than ten minutes before start time, the ‘send-off’ went smoothly. Fleet Feet has clearly sponsored numerous races and has learned from experience.

Course: Location might be one of the highlights of this event. The start/finish being in Grant Park (the same spot as the Chicago Marathon) made it simple for race goers to easily arrive via various transportation methods. Running south on the Lakeshore is always nice, as the trail is less dense and generally more shaded. I was also grateful that the 47th Street hill was only endured on the way out. A (Chicago) hill at around mile 12.5 felt inconvenient at first, but reaching the summit created a feeling of tough confidence for the remaining .2 mile finish along Columbus. (Brynn Freeman, with questions by Zach Freeman)