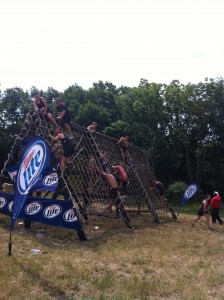 At the starting line for a typical street (or trail) race, you may see a few characters (the guy with no shirt on, the barefoot runner, perhaps even someone with full body paint on if you’re at an especially big race), but at these mud races, they’re everywhere. Costumes are part of the race package. At the Warrior Dash in Channahon, Illinois, I see a pilot, a duo of police officers (complete with handcuffs and fake guns) and a lingerie-clad Victoria’s Secret angel (who happens to be a very large, hairy man). Even those not in costume tend to have some kind of theme going. Whether participants are a member of a team with matching outfits or have just taken an old shirt and written something on it, there’s an amount of showmanship that goes into preparing yourself for race day.

As I’m scoping out the finish line before my wave gets started, a group of (pre-race) women parades by with homemade shirts reading, “You Wish Your Girlfriend Got This Dirty” just as another group avoids the mud pit that is the final obstacle, crossing the finish line in pristine running clothes amidst the vehement boos and jeers of spectators who are out for mud. I guess you could say their shouts are mud-thirsty. Or that they’re screaming muddy murder. This is the craziest post-race party and the most intense finish-line spectating I’ve ever seen at a race.

That’s because this isn’t a race. Not really.  It’s more like a festival. That doesn’t mean there’s no competition. It just means that time is secondary. Or even tertiary. Completing the course is the goal. Beating these obstacles is the goal. Getting extremely filthy and exhausted is the goal. Having a good time is the goal. But getting the best time doesn’t really factor in. That may be why the biggest obstacle of the course, the one that clearly levels the most participants, is also the one that people hardly talk about: running. 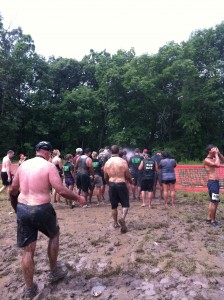 Most of these so-called “mud runs” (Dirty Dog Mud Run, Dirty Girl Run, Mudathlon, Down and Dirty National Mud and Obstacle Series… believe me, the list goes on…) would be considered fairly short distances in the running community (between three and five miles). And many of the runners I talked to at the Warrior Dash said they would never consider running a standard 5K or 10K, and certainly not a half marathon or marathon. The consensus seems to be that “normal” running is “boring.” That’s the same sentiment I picked up on in the advertisements for some of these races and in the social media posts of some of my friends who had competed in them: a general disdain for running, but an excitement about an obstacle course. And that’s the attitude that got me interested in the Warrior Dash in the first place: how could throwing a series of obstacles into the middle of a trail run draw so many people in? Particularly those who were not especially keen on running to begin with?

Trevor Stevenson, a non-runner friend who ran a Warrior Dash this year, explained it to me fairly succinctly: “When I saw the videos and challenges of Warrior Dash, something clicked in me. I’m turning thirty this year and I’m not happy about it. I had this feeling of ‘If you’re ever going to prove yourself like this, now is the time.’” And then it made sense. At its heart, these races are a way for people to channel their youthful recklessness and show their physical prowess in a way that both feels and looks physically challenging. Running on its own may be hard, but at the finish line you just look tired. You certainly don’t look beat up and grime-covered. You don’t look like you actually tackled a challenge.

And that’s what you get at these mud runs: proof of exertion. Yes, you get to have a good time and yes, you definitely 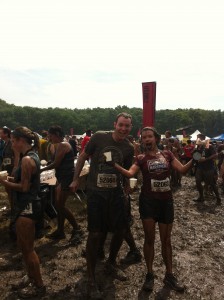 challenge yourself physically. But, most importantly, you get validation that it was worth it. Dirty, muddy validation. Your shoes should be donated. Your clothes should be thrown away. And you should be sprayed off with a fire hose and filled with beer and music and turkey legs. Because you did something today. Something visceral and challenging. It may have also been fun, but it was a physical feat.

And while most of these runs seem to market themselves as being hardcore, there’s an air of understanding playfulness underlying it all. Yes, you will jump over fire. And you will get pictures of yourself coated in mud and looking totally intense. But you will also probably walk a lot of this course. You will wait in a line for each obstacle and give a high-five to the guy dressed as the Incredible Hulk. And, at some point, you will probably jump into a big pool of mud and roll around in it.

And when you finish, you will have completed a running course. Whether you like it or not, you’ll be a member of the running community. And we will welcome you. Muddy feet and all.