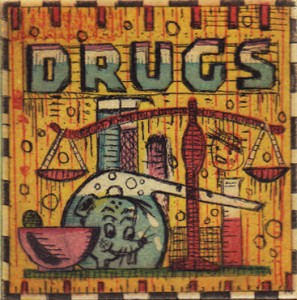 “If you’re snorting smack when you’re twenty-one, you’re crazy. But if you’re eighty and you’re NOT snorting smack, well… then, you’re really out of your mind.” —Alan Arkin as Edwin Hoover in “Little Miss Sunshine” (2006)

Every year for the past twenty-eight years October 5th rolls around, and I have a quiet thought about my sobriety. It is the thing I am most grateful for in this life. All else would not have been possible but for it. On that date in 1983, I stopped drinking and doing drugs. My last bender was an all-out hurricane involving whiskey, alcohol, cocaine  and what is now called ecstasy. We called it MDA, but it was your same basic happy-happy, warm and fuzzy fuck-drug that kids used to pop at raves.

There are some days I honestly miss the hell out of drugs. There are also days when I tell myself I’m glad I did them. Then come the days when I’m by myself and must take honest measure of those days, and I shake at the thought of how close I came to killing myself. Drugs are like that—confusing and deceptive, wily and beyond discipline (at least, for me) or definition.

There are also people who are just better off stoned. Reality is way too poisonous for them. As cynical as this sounds, we all know someone like this; people for whom we are grateful there are drugs to channel their unpleasantness into. As sad as it is, there are those who are hungry for the grave or the coma and do not care who they take with them.

Teachers, parents, nuns and other authority figures would always tell me, “Drugs are for people who cannot handle reality.” All of these years later, I realize they’re right. It’s true. Not in the way they suspect, but these mulch-heads are absolutely correct.

In our own country, right now, “reality” sucks the big, blue vein. The banks, the politicians and our government have systematically fist-fucked the average citizen. Whenever Joe Sixpack walks into a business office, or his former place of employment, or the local chicken franchise and empties a clip into the inhabitants, am I surprised? Truth be told, I’m surprised it doesn’t happen more often.

I think, sometimes, people make a choice: “Do I go home, roll up a fatty, and try to put today behind me, or do I go home, clean my guns, come back, and toe-tag as many of these mother-fuckers as humanly possible before the cops get here and park one in my brisket?”

I think this choice is considered way more often than we suspect. I know perfectly normal, friendly, next-door-neighbor-type, regular slobs who harbor annihilation fantasies that would curl your hair. I have an acquaintance you’d swear is the sweetest guy in the world (and he is) who once, with a smile on his face , told me he’d wanted to pound a bar-b-que spit up his ex-wife’s ass and slowly turn her over a fire.

I don’t want there to be any obstacles between this guy and whatever stash of chill pills he might need to put this thought out of his head. Vicodin? Oxycontin? Percocet? Here you are, bro… take two. And have a cocktail.

However much crime drugs account for, I’d hate like hell to think of how much there would be without them.

If you want an example: Prohibition.

It provided the venture capital for the rise of the most powerful criminal enterprises in the world. Without Prohibition? Al Capone would have been just another bartender in Brooklyn. A great many in our country would like to legislate our morality for us; tell us what we can drink, smoke, snort; where we can live; who we can fuck. These are the imbeciles who think the government should be your fucking mom. There is nothing in the Constitution that says it is the job of government to protect you from yourself. The founding fathers did a fairly good job of asshole-proofing our basic freedoms.

Were it up to me, drugs would be legal. All of them. You’d be able to walk into Walgreens and buy crack, ten rocks for a buck. Smack, ludes, acid, hash, shrooms, opium. All of it, Bunky. The whole shooting match would be as legal as Girl Scout cookies.

The War on Drugs has been a war on the poor. It has monetized a criminal empire that makes the bootleggers of the twenties and thirties look like rag pickers. Would a lot of people kill themselves with legal drugs? Yeah. The same ones who are practicing suicide on the installment plan now. It is sad and it is true. A certain and specific part of the population would not be able to handle this much freedom, just like now.

The alternative is to continue the fruitless, foolish and racist War on Drugs and guarantee another generation of fifteen-year olds will be on corners spraying the rest of us with nine millimeter rounds. So either teach these fuckers how to shoot… or remove the need. Legalize drugs and you break the back of a black market and reduce gun-related crime by at least half. Prisons would be for violent criminals instead of unlucky potheads.

Our Mayor—to his credit—sees the folly in continuing to bust pot-heads and has suggested at least decriminalizing it—good idea—and he must be commended for his forward-thinking gesture. It is not a small thing for a big city mayor to take this step. In the past, others have suggested this, much to their peril politically.

There is way too much money in incarcerating people, mostly people of color. The next squeak-head politician you hear promising to get tough on drugs? Know that guy hasn’t a clue. In the early nineties the mayor of Baltimore, Curtis Schmoke, was run out of office for suggesting legalization. Mayor Schmoke, at the time, was presiding over a city with the most pernicious homicide rate in America. He had tired of passing caskets containing teenagers. So he suggested something smart, bold and brave. In the American political theater, nothing gets you killed faster than this. The truth, in our political discourse, is still the most dangerous drug one can traffic in.