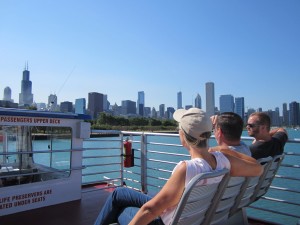 “Our waterways are a completely underutilized traffic network,” says Andrew Sargis, manager of Wendella Sightseeing and its Chicago Water Taxi. “If you look at a map of the city, the North, South and Main branches of the river parallel the Kennedy Expressway, the Dan Ryan and Wacker Drive. We should be using that network to move more people and goods and to fight gridlock.”

In operation since 1962, Wendella’s taxi service currently shuttles commuters and tourists from a dock at Madison Street (near the Ogilvie Center) to stops at LaSalle Street, Michigan Avenue and Chinatown, with one-way fares ranging from $3 to $5. Wendella’s competitor Shoreline Sightseeing also operates water taxis between docks at Adams Street (near Union Station), Erie Street, Michigan, Navy Pier and the Museum Campus. One-way fares usually cost $4 to $7, but drop to only $2 during morning rush hour–cheaper than the CTA. 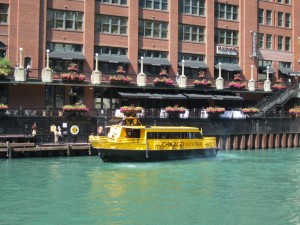 “On a water taxi you avoid congestion and obviously it’s a lot more pleasant than being stuck in traffic,” says Shoreline sales director Amy Hartnett. “You’re in the open air, watching the river and our beautiful skyline go by. There’s no better way to travel.”

While Shoreline has no plans to grow its network, Wendella is looking to extend service up the North Branch to the North Avenue Turning Basin, transporting Metra commuters to the Wrigley Global Innovation Center, Whole Foods and other employers. They’ve already signed a lease for dock space with the Army Corps of Engineers and service could start as soon as this fall.

Last winter 32nd Ward Alderman Scott Waguespack told me he’d like to see water taxis motor even further north to pick up train riders from Metra’s Clybourn Station, near Cortland Street and the river. “It’s literally a two-minute walk from the river to the station,” he said. “The idea’s a little outlandish but we put it on the table as often as we can, just to remind people.”

Sargis says that while the river north of Addison Street is probably too shallow for water taxis, in theory the boats could navigate the South Branch, Sanitary and Ship Canal, and Illinois and Mississippi rivers all the way down to New Orleans. He added that Wendella hopes to further expand its network in the future, depending on demand.

Pete Scales, spokesman for the Chicago Department of Transportation, which has jurisdiction over the Chicago River and Lake Michigan harbors, says the agency is open to discussing new water taxi routes with private operators. But he cautions that factors like weather may prevent the water network from becoming a practical alternative to the street grid. After all, the Main Branch usually freezes during the winter.

And while Lake Express runs a popular high-speed ferry from Milwaukee to Muskegon, Michigan, Scales also has his doubts about the viability of ferry service from Chicago to Milwaukee or Michigan. While he says Navy Pier would be a logical hub for ferries, he argues that the Milwaukee-Muskegon ferry is successful because the boat trip across Lake Michigan is several hours quicker than driving around the lake. “A Chicago ferry would only be competitive if the boats could travel faster than cars, buses and trains,” he says.

A more practical water route might be water-taxi service from the Loop to Lakeside, an upscale housing and retail development that McCaffery Interests wants to build on a former steel mill site, located between 79th and 92nd streets on the lakefront. Tens of thousands of new Southeast Side residents might strain the existing transit and road network, but McCaffery’s Joe Bakhos says a lake shuttle would be a great alternative for commuters and could draw additional customers to Lakeside businesses. 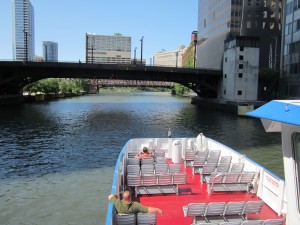 Seventh Ward Alderman Sandi Jackson says she’s all for it, and Sargis says Wendella would be interested in exploring the idea. “Physically and logistically it’s possible,” says Sargis. “But the question is whether people would be willing to take a boat instead of the CTA, Metra or driving. The trip could take over an hour, and conditions are more of a factor on the lake than the river. Even in good weather you can get six-foot swells.”

Fortunately conditions were optimal last week when I hauled my bicycle aboard a Shoreline water taxi to check out the efficiency and aesthetics of traveling from the Sears Tower to the Field Museum by river and lake. As soon as we left the Adams Street dock the ninety-degree day felt cooler and traffic noise faded away, and we cruised through the skyscraper canyons on the glittering green river under sapphire skies. Some fifteen minutes later the taxi arrived at a dock just southeast of Navy Pier, where I pedaled a couple hundred feet to another Shoreline boat docked on the pier, since their water taxis don’t travel through the Chicago Lock.

Soon we were motoring past a dilapidated wood-and-stone breakwater covered with hundreds of seagull. A lighthouse and a tall ship were visible to the east, and there was a stunning skyline view to the west. Reggae pulsed on the sound system as a breeze blew through the stubble on my shaved head. My serene, Thai-style water journey drew to a close as our vessel approached the Shedd Aquarium. I squinted my eyes at this gleaming Beaux Arts shrine and saw Bangkok’s lovely Wat Arun temple.

I-GO at Ten: Where Do We Go from Here? Transportation authorities, including CDOT Commissioner Gabe Klein, discuss the future of multimodal travel in the Chicago area at this panel organized by the local car-sharing service. Wednesday, July 11, Union League Club, 65 West Jackson, (773)278-4446, igo10.eventbrite.com, 11am-2pm;$25.

GITy Up! A Bike-Size Camping Adventure This low-mileage, fully supported overnight bicycle tour along the Fox River Trail and Prairie Path is perfect for newbies and families. Saturday, July 14 to Sunday, July 15, start on Prairie Path in downtown Wheaton, (708)365-9365, trailsforillinois.org, all day; $85.