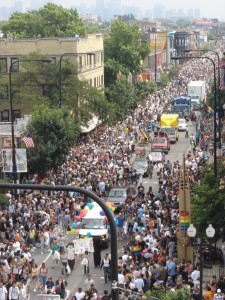 The parade’s drumming, roaring and thumping sounds outside our storefront windows shook the register screen in front of me as I rang up customers. “This is a grocery store, not like a state-law building, for Chrissakes,” a man vented to another cashier. “I mean, if I want to fucking come into a grocery store without clothes, that shouldn’t even be a problem. This whole system is ridiculous, you got cops standing over there and every corner armed with weapons like we’re some crazy folk about to riot in a grocery store,” said the half-drunken man who was forced to put on his clothes before entering the store. He ripped the receipt out of the silent cashier’s hand and stormed off.

The produce and the meat sections were eerily quiet, but, stepping behind the counter to man the register, I saw six packs—all cans, since we weren’t selling alcoholic beverages in glass containers today—roll down the moving belt, one after another.

A group of girls in their early twenties sat in a perfect circle in the cereal aisle. Their belongings were scattered around them, blocking passage. They were having their own little hippie circle time, eating whatever they wanted. Wauneta, one of the police guards, saw the group. She went clapping, and as she made loud cracks with each slap to her hand, she told them, “UP! UP! UP!” The girls moved slow and lethargically, as if they were being bothered.

“Where are your bathrooms?” a girl asked me as I watched Wauneta yell at the group. She had on short purple shorts riding halfway up her cheeks. Along her butt crack, the shorts announced her sexual identity (“LESBIAN”). “We share with the Center on Halsted, but since they are closed today during the parade, we don’t have a bathroom, sorry,” I responded.

Last year, parade participants wandered into the back stock area looking for bathrooms; sometimes they wouldn’t make it to the Porta Potties outside, and we’d stumble upon a puddle of pee. This year, police officers stood by our employee bathrooms, preventing anyone else from using them; we hoped a new line of Porta Potties outside the store would keep accidents out of our aisles.

A topless woman drunkenly dug through her purse to find her black strapless band of a shirt. As she put the tube over herself, she failed to remove her purse first, trapping the strap underneath her top. She tossed a bottle of water onto the register belt. Smart choice.

Once the cashier gave her the total for her water, the woman couldn’t figure out why she couldn’t get into her purse easily. She fumbled with her arm, then the shirt, trying to release the strap in order to remove her purse from her shoulder to get her wallet out. We all stared at her. Finally, frustrated after five minutes of trying, she slowly removed her tube top halfway, exposing one of her naked breasts while she finally got her wallet out.

As I reflexively turned away, I saw a woman in her forties lean over in the mulch right outside our storefront windows and puke her guts all over a newly-planted baby tree.

Inside, we remained professional and on the clock, declining anyone who didn’t have their ID on them. We even carded men and women who looked like they were nearing eighty-five. One woman whom I carded kept insisting she was fifty-seven. “We are carding every soul that walks in here today, I’m sorry,” I told her.

“That is the most ridiculous thing I’ve ever heard,” she glaringly told me, then walked back outside and disappeared into the moving crowd.