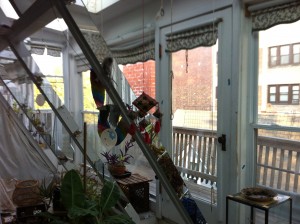 Early Wednesday evening, when the first guests start making their way inside the Ben Hecht house on 53rd and Kenwood, Kelly Custer is sitting out on the porch with a friend, asking if “maybe it was too much.” Earlier that morning she had called someone over to her family’s historic ten-bedroom bungalow for a little house cleaning; eight hours later, the job was done, or done as well as could be expected for a short notice cleaning of a four-floor house in transition. The person was paid, but Custer—whose family is selling their home of nearly fifty years—is concerned that things still aren’t clean enough: there are boxes lying around in corners, books and papers piled on desks, and for the next couple of hours a hundred-odd visitors will be walking through it all, taking a look at the house and its history. And, she figures, its mess, which probably should have been cleaned a little better anyway.

Prompted by Op-Shop and Southside Hub of Production organizer Laura Shaeffer, the Custer family had decided to open up their home to the community before saying goodbye for good. Shaeffer, like many others at the “Ben Hecht House Party,” is dressed in full 1920s garb, greeting guests as she walks through the building in flowing white pants and a rustling jewel necklace-piece her friend Victoria, a psychic, found in Chinatown. “The family was so worried” about the mess, she says, “but I said that’s fine, we’re going to clean up the front room, make it really nice and comfortable, and let people roam around and see that this is a space in transition.”

The house itself, identified by a street sign as the home of 1920s writer Ben Hecht, is a giant and a relic. On the outside the wood walls are painted yellow, and a baby blue staircase leads up to the porch. Crane your neck and you can just barely see the fourth-floor greenhouse from the street, its glass walls jutting out from the gabled roof into empty space. A fourth-floor annex has been converted into a massage room, and a floor below, Hecht’s former bedroom has become the study for Charles, the gregarious Custer family patriarch who bought the house in 1964 and worked on it for a year before moving his wife and four children in. 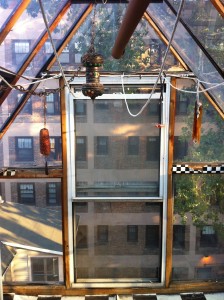 “Nobody,” says Charles, a retired lawyer in his eighties, “needs a ten-bedroom bungalow. Nobody! But we saw it, we liked it, we bought it, and just started doing stuff to it.” Charles’ late wife Irene ran an art gallery nearby, and so the house, remembers daughter Kelly with a smile, “was just such a bizarre artistic mess of, you know, both fine arts and pure Polack tack—which my mother was an unbelievable embodiment of. So it was Hyde Park Polack—you can just imagine.”

All of this is perfect for Laura Shaeffer and Pocket Guide to Hell proprietor Paul Durica, who greets visitors in the lobby before leading the evening’s main event, a throwback 1920s literary salon—“but without all the pretension,” says Shaeffer. Hecht and Durica are here with an entourage: frequently giving tours and leading reenactments through the Pocket Guide to Hell name, Durica was the person Shaeffer immediately turned to when she decided to hold the event. Tonight, he’s coordinated a series of literary readings featuring various contemporaries of Hecht and the early-twentieth century Chicago literary renaissance.

When the event starts in the parlor, the windows are open and a fan blows, many in the crowd sitting and standing with a “Bubbly Creek cocktail” from the bar in the back of the house. The audience, mostly young and old Hyde Parkers, is pretty enthralled with Durica’s Hecht, who speaks at the front of the room in a grey double-breasted jacket and bright red bowtie. Hecht, as Durica says, was an incredibly versatile writer; “he started out as a journalist, he dabbled in poetry, he wrote novels and literary journalism, and then he branched out into plays and screenplays, which really became his form.” His first screenplay, for the silent gangster film “Underworld,” went on to win the first-ever Academy Award for Writing.

With his dark hair and moustache, Durica has his character down well, and tugs on his bowtie every few sentences as he shares stories and introduces his “friends”—friends of his playing friends of Hecht’s. Durica goes on to introduce bearded Bill Savage, a Northwestern professor who gives a short lecture on the period, keeping it “short and sweet because it’s too hot in here for any fooling around.”

Still, what Savage says strikes a chord with Laura Shaeffer, whose organization, SHoP, is facing artistic homelessness as the lease ends on their Fenn House home in Hyde Park. “Aesthetic infrastructure,” says Savage, was essential to there being any “literary renaissance” in Chicago. “We need channels through which creative people can connect with each other,” he says, and while he doesn’t just mean brick-and-mortar buildings, it’s impossible to deny their importance: many of the people in the audience are artists and art-lovers, and conversations about what someone’s reading and what shows a person has seen aren’t uncommon.

The potential for fostering these sorts of meetings and conversations is what drove her to seek out the possibility of doing something at the Hecht house in the first place, Shaeffer says. Months ago, when the building was still on the market, she had planned on buying it as a new home for SHoP to use when their current lease ends in July. Thinking it over, Shaeffer realized she would have to move into the house herself, with her family, and use it as both a living and working space—not a very appealing idea. She decided against buying the space, and SHoP is still struggling to figure out what it’s going to do. 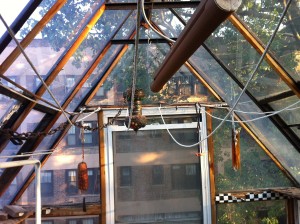 And yet, Shaeffer says that an offer has just been made on Fenn House that would allow SHoP to stay and make itself more at home in its current building. The potential buyer, an elderly member of the neighboring First Unitarian Church, wants to maintain the collaboration and friendly relationship that SHoP has formed with the church. His “primary motivation for buying it was that he wanted our project to stay,” says Shaeffer, relaxing in the back of the house with Victoria and a few other friends at the end of the night.

Almost all of the guests have gone home, and the few remaining people all know each other or, having just met over the course of the night, are all getting to know each other. Charles Custer is somewhere at the front of the house, talking about how much the neighborhood’s changed since he moved in fifty years ago, and a couple kids—wearing banded twenties-style hats, of course—are running around playing cards. A florist who has been helping out with the event walks past in an out-of-place sombrero, and Victoria is wishing she had started analyzing people’s handwriting earlier in her career as a psychic (“ ‘z’ is social status, ‘t’ is your work ethic”). In a few weeks the Hecht house will be home to a new family of six, and right now it’s not clear what will happen to SHoP’s own house. “If you move through the house,” however, as Shaeffer muses, “you can visually pick up on pieces of the history coming together.” She’s talking about Hecht and the Custers, but she might as well be talking about SHoP and its future.