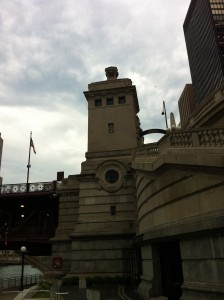 The new exhibit at the McCormick Bridgehouse & Chicago River Museum occupies a similar place in the museum as the river does in the city: presented at various points scattered throughout the museum’s five tight floors, the exhibit—extensive as it is—is easy to overlook. Unfortunately, the same could be said of the museum itself, which fills the southwest tower of the DuSable Bridge on Michigan Avenue and opens onto the Chicago Riverwalk at water’s edge. There are few signs identifying the museum at street-level, and few people walking along the Riverwalk to notice its entrance, something the museum and its “Waterline” exhibition are looking to change.

Featuring a dozen proposals for revitalizing and transforming the river’s South Branch, “Waterline” aims at bringing the stretch of water between Wolf Point and Pilsen out of a state of “post-industrial vacancy,” as Philip Enquist says. Partner in charge of urban design and planning partner at Skidmore, Owings & Merrill, Enquist spent a semester teaching Harvard graduate design students about the river, with the class culminating in the proposals on display at the museum. Each idea is presented on a mid-sized vinyl poster, too small for details but just large enough for designs grand enough that, walking past the first few, it can be easy to dismiss the whole project as pipe-dream architecture: the idea of mixed-use redevelopment of Wolf Point sounds great, and a wonderful, giant-sized tower would be a fine addition to the skyline—except, of course, that some developers attempted to do this a few years ago, and the “Chicago Spire” is now only a hole in the ground near where the river meets the lake. 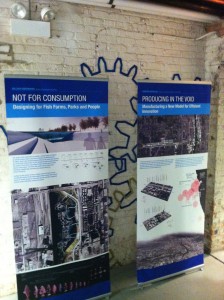 This kind of thinking completely misses the point. As Margaret Frisbie, executive director of the museum’s parent organization, Friends of the Chicago River, notes, while “on a practical level some of [the proposals] are quite dreamy and ethereal, better than almost all of them are real ideas that we should be thinking about, examining whether or not they’re worth extracting and using in a more practical way.” Tilly Hatcher’s vision of people kayaking in a raging Chicago River, paddling downstream as people zipline overhead on a line attached to a windmill, looks naïve and ridiculous. Her overall idea, however, is an inspired return to Daniel Burnham’s 1909 Plan of Chicago: while Burnham designated green spaces on the lakefront and set aside forest preserves to the west of the city, the river remained little more than an industrial thoroughfare; in Hatcher’s plan, the river becomes a green thoroughfare, linking the parks of the east to the forests of the west.

As with all the other proposals, there are precious few details to Hatcher’s “plan.” “Proposal” is itself probably too strong a word for what is on display: not set plans, but visions and ideas. Two students call for the redevelopment of the former riverfront rail yard between Roosevelt and 18th Street; another envisions transit-oriented development occurring through a new “River Line,” based on the intelligent (and too often unrecognized) premise that “only by reinvesting in nearby neighborhoods can the river truly flourish.” In all these ideas, there is found that simple commodity of hopeful optimism necessary for any change to come about, so common in youth but so scant in recessions. 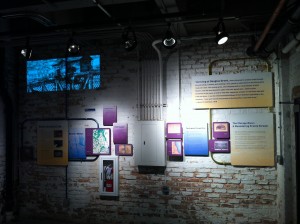 “The river,” says Enquist, “has been left behind in the shadow of the heavy industry history of Chicago,” but there is hope that it won’t stay there forever: even on a rainy Friday afternoon, the river is not—as out-of-towner John Lewis Peyton described it over 150 years ago—“a sluggish, slimy stream, too lazy to clean itself.” It’s not idyllic, and there’s nobody swimming alongside the sightseeing cruisers and water taxis just yet. Neither is there any guarantee that Asian carp won’t make it up the river and into the Great Lakes, devastating the billion-dollar area fishing industry. Still, things seem to be looking up: Congress is hurrying the development of a plan to protect the Lakes from the invasive species, and through sanitation reforms the river is on track to be officially swimmable by 2016. There may not ever be a Spire-like structure at Wolf Point, and Donald Trump may never find riverfront retail for his Trump Tower, but at least there’s hope for change.