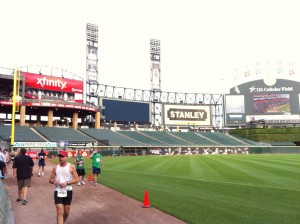 Breakdown: Despite boasting the use of U.S. Cellular Field—made especially impressive since the end of the course involves runners going completely around the interior bottom level of the stadium and then circling the warning track inside the field—the Les Turner Strike Out ALS 5K (now in its third year) feels like the charity run that it is. With about 400 runners and a motivational speech from Les Turner Foundation patient KayLynn Van Driest thanking runners for their participation and letting them know that they are “running for every ALS patient who cannot run for themselves, ” this race manages to walk/run the line between selling its unique Chicago sports-based location (a la Race to Wrigley) and being a straight charity event (a la C4 Miles). Having a post-race party in a mostly empty baseball stadium while watching the All-Star Game on the Jumbotron was an experience, but it’s still slightly disappointing that there was no food aside from what was available for purchase at the stadium concession stands.

Price: $40(early registration)/$50(race day)
Course: Organizers removed the ramps and stairs that were part of the (much more difficult) course last year, but this is still a pretty erratic route, with lots of turnarounds and oddly shaped loops through parking lots. However, it’s not a confusing route and the final run into the stadium, through a waiting room, around an endlessly curving tunnel and then out onto U.S. Cellular Field is beyond exciting, particularly with the Jumbotron blasting the All-Star Game.
Organization (gear check, etc.): Gear check was on an unusual numbering system that ended up confusing things more than it helped, but checking in one place and picking up in another made things convenient for the runners. Easy race-day packet pickup. Great volunteers throughout.
Goodie Bag (includes shirt): Just a black cotton/polyester t-shirt.
Weather: Near perfect. Overcast evening with a nice cool breeze. (Zach Freeman)