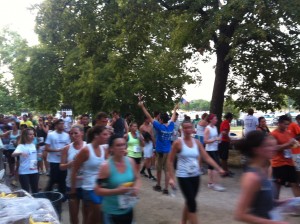 Breakdown: For an event with “Block Party” in its title, it was a bit of a surprise to find a distinct lack of complimentary post-race snacks and beer at the after-party on the Peggy Notebaert second-floor patio. An enthusiastic band kept things lively, but despite several signs promising “Food and Beverages” there was no food to be found and the beer (Old Style) was $4 a pop. Add to that 5K and 8K courses that jumped onto the (already crowded) Lakefront Trail within the first mile and stuck to mostly out-and-back layouts that filled both sides of the trail, and it’s hard to believe that this race, celebrating a French national holiday, is in its thirty-first year. To be fair, this event lived in the West Loop until 2010, so maybe they’re still getting their bearings on their new location. But judging from the disgruntled runners I saw leaving the party and the vocal frustration at the massive gear check line, organizers better already be planning ways to improve upon the many issues faced this year.

Price: 5K: $27-$40, 8K: $32-$45 (incremental price increases as race day neared)
Course: The cloud of dust that quickly spread over the start of the race wasn’t really the organizers’ fault, but putting a run this size on the Lakefront Trail during prime evening running time was. As an out-and-back course, there were times when the race took up both lanes, leaving bikers and non-event runners searching for free space and participants crowding each other to stay in the right lane.
Organization (gear check, etc.): Putting the gear check at the top of the stairs leading to the patio where the post-race party was located was a real goof. The hallway quickly grew much too crowded, with the line stretching across the entire second floor and back down the stairs. Many people were confused as to which line was for gear check and which was just to get to the block party. There were multiple signs promising “Food and Beverages” though no food was available.
Goodie Bag (includes shirt): Nice, white running shirt. Very wearable but not a knockout.
Weather: Slightly humid but decent running weather. (Zach Freeman)