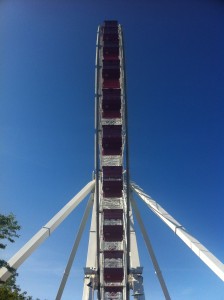 I watched a Ferris wheel get stuck at an amusement park when I was younger, when the park was nearly closing and it was dark. I remember the screaming, even though nothing especially bad was happening. I thought about those folks on the front of the ride who were just hanging in mid-air. If they had to climb out to escape, they would have nowhere to fall except to the ground. At least if you were at the top, you had rails and cars to climb down. Ever since, I’ve had an irrational fear of this most seemingly benign of rides.

“I’m going to ride the Navy Pier Ferris Wheel today, guys,” I told some coworkers on the morning I decided it was time to get over this.

“Really? Why are you afraid of Ferris wheels?” one of the produce guys asked.

“I have no idea. I’m not afraid of heights or anything. In fact, I love roller-coasters,” I said as I finished ringing up their breakfast items.

“It’s all about you being in control,” another produce guy said. “You know, it’s different when you’re just swinging slowly in a little cart on a circle and you can’t stop it from moving.”

“I don’t know how that’s different from a roller-coaster,” I shrugged.

“Well, good luck. Just don’t think how the little carts are pinned in with a tiny needle, holding your car to the actual wheel. Those never break anyway, right?” he laughed.

I started thinking about what Ferris wheels meant to people who have never had a fear of these spinning death wheels. 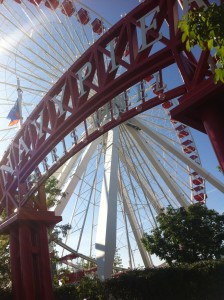 As I was walking up to Navy Pier’s wheel, crowds of families and groups of friends swarmed around the park. I smelled funnel cakes, and for a second, I thought one of those sounded great, until I thought about what I was just about to do. Well, maybe afterward I’ll get one, I thought. It’ll be my reward.

We walked up to a little ticket booth where an old man sat behind the glass. He wasn’t especially excited to be selling carnival tickets to a bunch of tourists.

“Twelve dollars for both of you,” he said to my husband and me.

He slid the tickets underneath the hole in the glass. I wanted him to say, “Have a great ride,” or something, but nothing. He never even looked at us.

We started to walk up the twisted path, with about fifteen or so people in front of us. A few minutes later, two young teenagers working the wheel motioned us up with their hand, “Come on, guys.”

“We get in while the wheel is moving?” I asked.

The guy pointing at which car to get in didn’t hear me. The wheel slowly kept moving, and I crawled in. I was on it, and there was nothing I could do to stop now.

We started going up slower and slower, to a point where it felt like the wheel wasn’t even moving. My husband kept sliding from one side of the cart to the other to snap photos, while my hands firmly gripped the plastic seat. Every few seconds for that seven-minute ride, I couldn’t tell if we were moving, until we got to the top and I saw the Chicago city skyline. 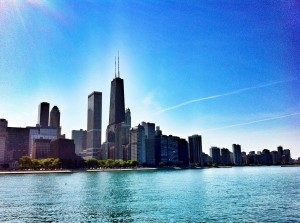 My eyes glazed over. My hands loosened. My heart felt full of love for how incredibly beautiful the city of Chicago appeared up here. I must have gotten too caught up in the city walls lately. When you put yourself above the rest of the gun shots, the muggings, the robberies, the accidents, the fighting, the bus hissing and braking, the jackhammering and taxis honking repeatedly at each other, it’s a quiet and beautiful place. The sky was a serious summer blue, and the skyscrapers, the beaches, Lake Michigan waters and the song playing from a small speaker attached to the ceiling of our car played the song “Sweet Home Chicago.”

I just fell in love with Chicago all over again.

It wasn’t until late that evening after we got home from the ride at Navy Pier that I decided to look up the accident reports over the last ten years on Ferris wheels. I wanted to feel better for having such irrational fears about getting on the wheel earlier.

In 1995, when Navy Pier was planning to have a grand opening for the “3.2 million visitor Ferris Wheel,” there was a tragic accident in another amusement park on the same night. “Pictures of detached cars dangling from a Ferris wheel-type ride at the Most Holy Redeemer Church carnival in Evergreen Park,” the article read. 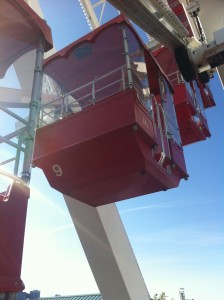 The Tribune also reported in 2001 how “A Chicago woman who fell to her death from the Navy Pier Ferris wheel on Thursday committed suicide.” They claimed she leaned over on purpose; My exact fear was of leaning over too far to look at something, even though the Pier’s wheel is enclosed for the most part.

In a Northbrook Ferris wheel in 2005, the Tribune reported, “some of the children were left hanging sideways and upside down in the enclosed cars when the ride broke down ”

Back in 2007, the Chicago Tribune reported, “Five family members fell 65 feet to their deaths from a Ferris wheel Monday after the car they were riding unexpectedly overturned at an amusement park in Seoul, South Korea.”

I thought, “Maybe I should have read this before I went for my ride?” But then I would never have gotten on that spinning wheel of death.