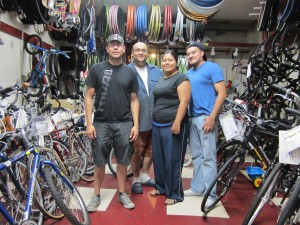 One thing I love about bicycle stores is they often double as community centers. Irv’s Bike Shop, a mom-and-pop store in Pilsen that marks its fortieth anniversary this month, is a great example. “We have a family vibe because it’s family and close friends that work here, and our customers see that,” says staffer Veronica Ortiz, whose brother-in-law Enrique “Henry” Ortiz owns the shop and husband Ricardo “Rick” Ortiz manages it. “And our shop is considered loyal to the neighborhood because we’ve been part of the community for so long.”

Original owner Irv Rout, eighty-three, grew up in Pilsen a few blocks from the store at 17th and Racine. After serving in two wars he opened a general merchandise shop with his wife Zora “Violet” Rout in the next storefront west of the present-day bike shop. In 1972 he opened the current location and began stocking bike parts. “A fellow said ‘Why don’t you sell tires and tubes,’” Irv tells me over the telephone from his home in suburban Hillside. “‘The kids will find you.'”

During the first few years he owned the bike shop, the neighborhood transitioned from mostly Czech, German and Eastern European to mostly Mexican. The Ortiz’s uncle Rafael “Ralph” Cartagena, now living in Florida, was Irv’s first employee. Victoria, Henry and Ricardo, as well as non-related staffers Arturo “Art” Abel and Augustin Toledo, grew up near the shop and liked to spend time there after school and on weekends. Back then the store also sold toys and housed a couple of arcade games. “It was a good place for the kids to hang out,” says Irv. “The mothers sent their kids there because they knew they wouldn’t get into any trouble.” 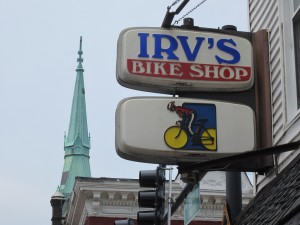 Irv retired eight years ago and sold the business to Henry. “I told him, ‘It’s a Hispanic area now. Do you want to change the name?’” he recalls. “Henry said, ‘Are you crazy? Everyone knows Irv’s.’” Rout still owns the building and drives in from time-to-time to visit, and he has willed the building to the current owner. “I’m leaving it in good hands because Henry is really honest and trustworthy,” Irv says. 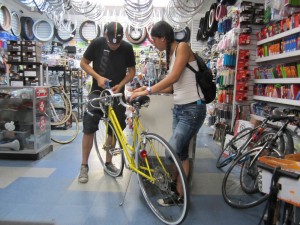 Last month I dropped by on a hot Sunday morning to hang out for a few hours. 18th Street is quiet as I pedal by Catholic churches, Mexican restaurants, Spanish-language bookstores and Latin music shops, as well as newer businesses like Honky Tonk BBQ, reflecting a recent influx of Anglos to the neighborhood.

After Veronica and Ricardo greet me I check out the two small showrooms. There’s a rainbow of road-bike tires hanging from the ceiling of the back room and several different models of affordable fixed-gear bikes are for sale, including one with a white frame and apple-green grips, saddle, tires and chain. As a nod to the neighborhood’s long-time demographics, the shop stocks skullcaps, suitable for wearing under a helmet, featuring the eagle-and-snake emblem from the Mexican flag with an Aztec codice in the background.

The store used to specialize in lowrider bikes, tricked-out rides inspired by lowrider cars, back when the cycles were big with the Mexican-American community. But Ricardo says the shop stopped selling lowriders because “fixies” became more popular with inner-city kids. “You go faster on a fixed-gear because it forces you to constantly pedal,” he says. “You can make it lighter because there are no extra gears, and it’s easy to customize your bike. A lot of people get them powdercoated with matching wheelsets and bar tape.”

Over the course of the morning customers and neighbors filter in for repairs and chitchat, conversing in Spanish or English. In the early afternoon Angel Carabes, who’s dating Ricardo and Henry’s niece, shows up to help out and serve as comic relief. “Your brother’s a jerk—he wouldn’t even let me borrow a used bike to go on the L.A.T.E. Ride,” he says to Ricardo, referring to the previous night’s after-dark bike tour that drew thousands of riders. “What has two thumbs and needs a bike?” He grins and points to himself with both thumbs. “This guy.”

A bit later Art arrives, groggy from the all-night ride. A young woman in cutoffs with a long black braid comes in and asks him to re-tape the handlebars of her Schwinn Varsity, followed by a father with his two little sons and tricycle that needs to be repaired. “You got any money, Daddy?” one of the boys asks. “Of course I don’t,” he replies. “Now please don’t touch anything or knock anything off the walls.” One of the kids runs behind the counter. “If you come behind here I get to keep you,” teases Veronica. 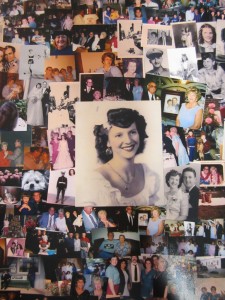 In the mid-afternoon a downpour starts. During the lull, Ricardo takes out a photo collage he created in tribute to Irv’s wife Violet, who passed away recently after fifty-seven years of marriage. A portrait of Violet as a beautiful young woman is surrounded by images of their life together, including Irv in his Marine uniform, extended family and bike shop staffers. The young employees served as her pallbearers.

After the storm passes and the workday draws to a close, a friend brings in a pizza to share. Over slices I ask Veronica how things went today. “Normally it’s packed on the weekends, but this was more of a hangout session. It was a day for us all to bond.” Angel picks up his smart phone and reads me a Yelp review that nicely sums up the vibe at this friendly, no-nonsense store. “Irv’s is the least pretentious bike shop I have ever been to in my life.”

The Underwear Mass This month’s Critical Mass bike parade/protest should be scorching hot, so there’s a proposal for participants to pedal in their skivvies “in support of positive body image and gender equality.” Friday, July 27, Daley Plaza, 50 West Washington, tinyurl.com/underwearmass, 5pm; free.