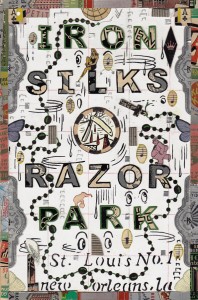 When I was a teenager I worked briefly at a carwash. It was hard work, and when it was busy it was ass-breaking work. I worked with a lot of black guys who were old pros at this—these guys were quick and perfect and earned the lion’s share of the tips, wiping a car down in about ninety seconds after it went through the rollers and the drapes. A couple of them were musicians—one of them wound up in Lil’ Ed & the Blues Imperials. The other guys were career hustlers who had more than one job, and these guys loved automobiles.

Very often, when an Electra 225 came through, or in their parlance “A Deuce and a Quarter,” they’d swoon.

A Deuce and a Quarter was the shit. Or a Coupe De Ville. One guy, who went by C.T., told me “Tony, there is three French words every man of color knows, young brother—Coupe de Ville”—and he would crack up laughing.

C.T. was an older guy with a phenomenal singing voice and a ferocious alcohol problem. Of course at the time, I had one too. Often he would sing a cappella over the sounds of the rollers in an angelic falsetto—Sam Cooke, Jackie Wilson—his rendering of “Lonely Teardrops” could make you cry.

He’d also sing Teddy Pendergrass and Marvin Gaye songs—one time he sang a Crystal Gayle song that in his voice was so lovely, you forgot it was middle-of-the-road country music. “Don’t it make my brown eyes blue…” We all tried to figure out what the hell he liked about that song, and he would tell us he liked the way the song was “built.”

I still don’t know what that really means. I’ve always thought that because he sang it about an octave higher in pitch, that it was a tune that rewarded someone with a pitch-perfect upper register, like he had. Most of the time C.T. was a joy to be around.

On occasion, he’d get lit at lunch. One too many shots of 151 and the clouds would come in.

C.T. was from New Orleans—he’d fled there years ago behind some trouble that he never really elaborated on. He just knew he could not return. From time to time he’d let everyone know that as a young man he’d stacked some time at Angola prison. And that while he was there he’d gone to barber school; wherein he’d whip out his straight-razor and turn its ugly, lean blade so that the light could show you the perfect white line of sharpness on its edge.

He would get this low voice on and say, “Hang around my house, Jim… You’re gonna’ get a shave—closest one you ever had.”

Even the young guys avoided C.T. when he was in his cups. They told me it was not uncommon for black men of C.T.’s generation to carry a razor—this way if the cops picked him up he could say he was a barber.

They told me they themselves carried box-cutters, and other work-tool-like razors. Naively, I asked, “What for?” and Ray, a younger guy, said: “For people who look like you, little man—not all of you is so friendly.”

With that the guys laughed and I realized something. In Lombard and Villa Park, Illinois—pretty much lily-white suburbs—these guys were afraid of us.

I guess I shouldn’t have been surprised, but I was. Every once in a while one of the guys would get a DWB—a “Driving while Black” ticket. Never for speeding—all of these guys lived on the South Side and knew well the tender mercies of suburban cops.

The tickets were always for chicken-shit stuff like an expired tag, or a busted tail light. Stuff white motorists would have skated by with a warning at best. It opened my eyes a lot, and it explained the deep rage of C.T. after he’d had a few belts.

Still, he was mostly good company—a funny guy with lots of stories about New Orleans. Stories about being in a band that played out at the race track—back in the early sixties a very prestigious gig.

He told me he once opened for Earl King and had the temerity to end his set with “Trick Bag,” Mr. King’s signature hit. “It was a fool thing—but Earl glared at me and I smiled and winked at him and he just busted up laughin’, shakin’ his head…. He told me, ‘Son—it amazes me that you still on this side of the dirt.'”

C.T. was the one who made me curious about New Orleans—I , even then, thought it was a magical place—like the inside of a snow globe. And even though I’d never been there, I could see it in my head, hear it in my dad’s Louis Armstrong, Pete Fountain and Al Hirt records.

On Fridays, the musician guys would change into their stage clothes before driving back to the city. This was always the best day to avoid C.T. He’d take swigs of of his Hennessy that looked like bites and glower at them in their wide bells and platform shoes and silky Nik-Nik shirts. He’d mutter that they looked like sissies and then it would get quiet. Ray would walk over and ask him, “You got something to say old man?” and C.T. stared right back with the thousand-yard stare and his voice would go up in pitch.

I wanted to be anywhere else in the world right then—it felt like all of the air had been sucked out of the room. Ray’s eyelid would tremble and he’d say “Knock it off C.T. You scarin’ the white boy.” And then they would fall out laughing.

One time an asshole tossed the keys to his Benz to one of the guys and called him “Smokey,” as in: “I want it waxed too, Smokey…” C.T. carved up the guy’s back seat with cuts so fine, the guy didn’t notice it till the next day.

The next day he came in and the dealership next door had to find him new leather upholstery. He came over to us and said ” I left my car outside Gianotti’s and some asshole slashed my backseat. Can you believe that shit?”

C.T. said, “It could have been worse…” The guy got pissed :”What the fuck are you talking about?—this is going to cost 500 bucks… Fuck.”

C.T. snapped right back, “They could have set it on fire, burned the whole car. ‘Least now you don’t have to deal with all that… Smoke.”

For a moment they locked eyes, and they both nodded, just long enough for them to know.