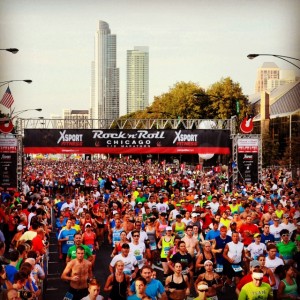 Breakdown: The Rock ‘n’ Roll brand may make the case that the post-race party can be more important than the run, but they clearly know how to handle both. Competitor Group, which acquired Rock ‘n’ Roll in 2008, is currently running thirty racing events under that banner around the world and constantly expanding. Today in Chicago the mixture of high-energy rock music along the course and big sponsors at the expo and post-race party made the entire morning feel like a music festival that you run through with 20,000 of your friends. It doesn’t hurt that the post-race party (with musical performances) takes place in Grant Park in an area used by Lollapalooza. I’ve also never been bombarded by so many goodies (water, Gatorade, chocolate milk, pretzels, popsicles, Jamba Juice shakes, Snickers, etc.) at a race finish line.

Price: $85-$120 online with rolling price increases; $150 at expo
Course: Creatively structured course that goes as far north as Grand, as far east as Laflin and as far south as 31st. Bands stationed along the way were motivational but the many water stations and volunteers with hoses and wet sponges really made the course impressive.
Organization (gear check, etc.): Competitor Group is constantly running Rock ‘n’ Roll events around the world. They know what they’re doing. Corrals were clearly designated and easy to get into, gear check was no problem and the massive expo and post-race party were impressive. McCormick Place isn’t the easiest venue to get to for packet pick-up but they made it worth the hike.
Goodie Bag (includes shirt): I liked the blue “mini marathon” shirt better than the white half-marathon shirt, but both are high-quality Brooks brand shirts with simple, memorable designs. Plenty of stuff to get excited about in the “swag bag” and if you throw in the freebies at the expo and the post-race party it’s a pretty sweet haul.
Weather: I heard many grumblings about the heat/humidity but even though the temperature hovered right around eighty throughout the race, I thought the extensive cloud (and building) cover made for a pleasant race day. (Zach Freeman)