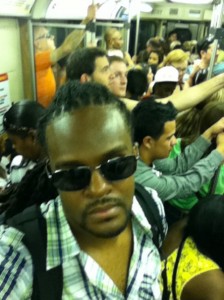 An unsettling feeling develops in your stomach when the train zooms onto the platform, and all you see is crowded car after crowded car. The humidity already makes your skin feel as if it has been dipped in hot glue, so the last thing you want to do is get into a sticky, stuffy train with a hundred other people who have sweat stains underneath their armpits.

Darren Calhoun was another body standing on the platform when the red line rolled in on Monday, June 25 and he squeezed in between the other hundred or so sweaty bodies and backpacks.

“For the last ten stops, it was so crowded that no one could get into the rail car,” says Calhoun.

He heard two women behind him get into an argument about the crowded space. “Next thing I know, these women are throwing water bottles and pop cans at each other because they couldn’t get close enough to hit each other,” says Calhoun. Others in the car started to look around, unsure of how to end a physical fight between two women far away enough they had sandwiched other riders in between their altercation. As soon as the women started the argument, someone pulled out a camera nearby to start recording and yelled, “This is gonna be on ‘Worldstar Hip Hop’.” The women started smiling at the camera while still aggressively throwing and insulting each other at a distance, but Calhoun couldn’t let this happen for the rest of the ride.

“I really didn’t want to see another fight break out that might end up on YouTube or WorldStarHipHop.com. It saddens me when I witness violence like this, so I wanted to pull out what little influence I had to push that situation into a more positive place because I’ve always been a peacemaker among my friends. But this time I felt helpless, especially on public transportation. Only minutes before the fight really escalated, I tweeted about being ‘over it’ because I was just frustrated with the conditions on the train that morning,” says Calhoun.

He also happened to remember watching a video of Josh Wilson singing “Hey Jude” at a public airport to ease the tensions of delayed passengers a couple years ago. “There was just no way I was about to just start singing on this train. But I changed my mind when someone, somewhere buried among the faces yelled, ‘You guys should sing instead of fight,’ and then another person on the other side of the train yelled, ‘Yeah, somebody should sing something.’ So I just belted out the first line of ‘Lean On Me,'” says Calhoun.

Some women near him started clapping to the rhythm right away. A few seconds later, the whole train was singing, “You just call on me brother, when you need a hand.”

“That’s when I pulled out my camera phone to record this awesome moment. There were so many smiles on the sweat-filled crowded train, and even though the girls were still actually angry, they just stopped fighting. The yelling stopped afterward and one eventually just got off the train,” says Calhoun.

“I didn’t think anyone would believe this story that I just started singing on a train in this situation, so that’s why I had to record it.” (Desiree Cole)