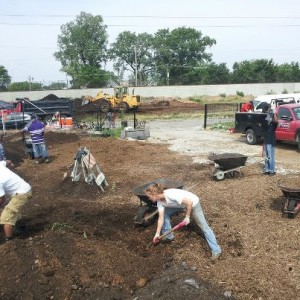 On a Sunday afternoon in the middle of the recent heat wave, a handful of volunteers dug into beds of steaming compost with forks and spoons. Half the group was planting kale and collard-green seedlings with the chewed-up cutlery, while the other half lay compost with a Bobcat mini-loader to create new raised beds. This laid-back Sunday work crew was bringing City Farm’s new urban farm, in the South Side neighborhood of Washington Park, one step closer to fruition.

City Farm’s one-acre farm on the site of the former Cabrini Green housing project has become a fixture on the local food scene, selling produce at its on-site farm stand, at the Logan Square Farmers Market and through a CSA program. It began as part of the Resource Center, a multi-armed organization founded by Ken Dunn in 1972 that aims to revitalize Chicago through recycling, composting and urban farming. The mission is holistic, the goal being to integrate education, land reuse, local investment and jobs, community beautification and healthier agriculture and eating. In one example of this integrated approach, City Farm uses food waste collected by the Resource Center from local businesses and universities for its new farms and community gardens.

“We operate as an economic revival to our city,” says Dunn, “primarily to the local communities that are hardest hit.” In Dunn’s vision, the urban farm surpasses a manufacturing-based economic intervention. For example, an auto factory, he says, could easily be abandoned down the line; fresh vegetables never go out of style or out of demand. Urban agriculture has been identified by community development organizations as one of the best anchors for community development.

The new site lies on 57th Street between Perry Avenue and Lafayette Avenue on a lot that was once a homeless shelter. Around the lot stand a few houses, a liquor store and quite a bit of empty space. Back when a homeless shelter occupied the lot, City Farm provided it with fresh produce; now that the shelter is gone, they aim to do the same for the community at large, which they’ve identified as ripe for the kind of development they provide. In explaining why City Farm chose Washington Park, Dunn says, “There are a hundred vacant acres in that community—over half of the property is vacant, over half of the people are unemployed.” With the help of volunteers and of Christy Webber Landscapes, one vacant lot will soon be reborn.

Dunn says City Farm has already begun interviewing and hiring local people, with the goal of staffing the site with six employees. The site will have its own farm stand on-site to sell produce directly to the local community on a sliding scale. Half the plot will be dedicated to growing produce for local consumption, while the other half will be the “cash crop” sold to high-end restaurants to support the farm’s operations. Clients buying their produce include Chicago celebrity-chef Rick Bayless and others—so many others, in fact, that demand has outgrown supply. The new site in Washington Park is part of the plan to meet that demand while maintaining the integrated, sustainable approach that defines City Farm’s presence in Chicago, and brings new growth to its communities. (Alli Carlisle)