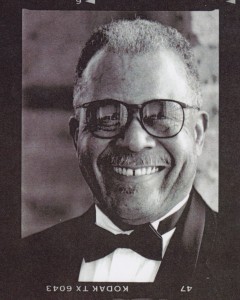 “This is just one of the iconic pieces of advertising Emmet McBain helped create while he was an ad man at Vince Cullers Advertising.

“As long as people speak your name you are still present,” Dr. Carol Adams, president of the DuSable Museum, told the assembled audience of fifty or more people who came to remember McBain, who died in May at the age of seventy-seven. She encouraged everyone present to speak the names of those who have gone before. Someone said Miles Davis. Another Vince Cullers. Calvin Jones. Margaret Burroughs, co-founder of the museum who died in 2010. Others mentioned parents and siblings. Then, when the names finished rising from the audience in the DuSable theater, it was time to honor Emmett McBain.

Born in 1935 in Chicago, McBain began his career in advertising in 1957 when he was hired by Vince Cullers and Associates, the first black-owned full-service advertising agency. From there he went on to join Playboy as promotional art director, where he designed the award-winning Playboy All-Stars album cover. The cover brought him more work, and he designed album covers for labels like Mercury Records throughout the sixties and seventies. McBain’s ad work ranged from Ford Motor Company’s introduction of the Mustang in 1964 to redesigning the logo for Canadian Club in 1987. In 1971, he co-founded Burrell-McBain Advertising. Though he would leave three years later, the ads from his time there for companies like McDonald’s highlighted themes that would be prevalent in his work for years to come—a strong focus on family and on beauty in all its forms.

But it is his work at the height of the Civil Rights Movement for which he is famous. Bruce Bendinger, an acquaintance who worked at the Foote, Cone and Belding ad agency during the time, said of McBain, “In the life of an ad man, you can be well paid but you’ll likely do a lot of trivial work. Emmett did work that mattered.”

Upon his return to  Vince Cullers Advertising, he helped make some of the boldest black advertising during that time. Iconic ads for Wantu Wazuri (Swahili for ‘beautiful people’) and Johnson Products’ Afro Sheen were hugely influential at a time when Black America was trying to figure out who it was. McBain helped re-imagine national campaigns for a black audience, from Kent and Marlboro cigarettes to Beefeater Gin. He designed voting campaigns to encourage Black Americans to exercise their hard-won rights. McBain helped to bring the black identity into the homes and on the televisions of all of America. 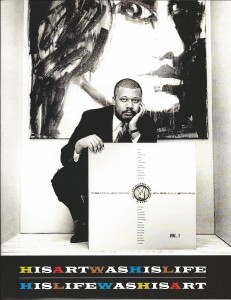 Cancer claimed Emmett McBain’s life on May 22nd here in Chicago. Tom Burrell, co-founder of Burrell-McBain Advertising, said, “We had a conversation once we knew he was on his way on, and I told him ‘Emmett, you got the diagnosis fifteen years ago and… you lived to be seventy-six years old. Now you know damn well you weren’t supposed to be living to seventy-six years old, the way you have been living… Think of it as a hundred and thirty-five years in Emmett-years… So there isn’t a reason to be sad.’ We should be saying wow, that’s amazing. It was a life filled with talent and productivity and partying and fun… So if we do any crying here it should be tears of laughter and joy.”

Barbara Mahone, a poet and McBain’s third wife, said, “Emmett loved life and saw life as a big adventure, relishing new experiences with all of his senses. The Emmett I knew saw life as a creative pageant or as a costume party, with Emmett as producer and director and leading actor. He was a visual artist but also a performance artist ahead of the times. Emmett liked to do things to excess, which could be a problem for other people. I think he felt it necessary to keep pushing the boundaries in order to prove there were no limits or to discover the limits for his art. He didn’t like rules and he felt they mostly existed to be broken. No taboos—which frequently got him in trouble, but I think he thought it was worth it, regardless of the consequences.”

McBain left advertising and had a successful career as an artist. After a stroke in 2007 reduced the dexterity in his hands, he changed the way he worked and began using watercolors. The DuSable had a monitor set up showing some of his watercolor work, “A Party of Color.” His drawings of his people, strong-jawed, cool black men and stoic, sexy, black women were frequently covered in explosions of color—pinks, blues, vivid greens. The simplest sketch of lines came together to form a couple dancing then a wash of muted blue over them. Another painting was of a tree, many-limbed, wide-trunked and lit up in shocking pinks and earthy browns.

Helen West, owner of Neleh Artistic Expressions in Chicago, says “He was very talented, meticulous and particular. He often came up with his own framing designs and challenged me to pay attention so I would get it right. It had to be exactly the way he wanted it. In fact, on one occasion… the matting was not quite right so he, on the spot, painted a continuing theme on the matte so it tied in. He never stopped creating. The last exhibit he showed in my gallery was “The Secret Life of Trees.” He also wrote and recited poetry for the exhibit.”

Lowell Thompson, a friend and fellow artist, says, “In a land of ‘Mad Men,’ Emmett McBain was one of the maddest and happiest and hippest.”