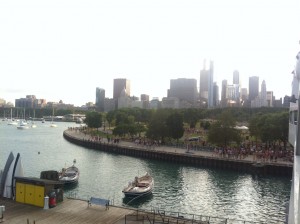 Breakdown: Yesterday I heard a news story discussing the benefits of wearing less to stay cool when exercising. So running the second-annual Undie Dash tonight with several hundred other scantily clad runners seemed like a sensible option. We were just being smart about the amount of skin we exposed for efficient sweat evaporation, right? But it wasn’t just skin on display at the event (though there was plenty of that), there were also a good deal of creative—and appropriately skimpy—costumes as well. As an untimed 5K executed on an open course along the Lakefront Trail, the eye-catching costumes and post-race party with a free Mike’s Hard Lemonade at the Columbia Yacht Club created an atmosphere geared more toward celebration than competition.

Price: $35-$40 online with a scheduled price increase, $45 on race day
Course: The open course runs along the Lakefront Trail, starting and finishing in front of the Columbia Yacht Club. Runners, bikers and tourists on Segways sharing the trail were more accommodating than usual, often stopping to film the parade of skin and costumes.
Organization (gear check, etc.): Gear check is obviously pretty important for a race like this and coordinators put an appropriate amount of support behind it. Similarly, packet pick-up was only available on race day, but it moved quickly. The post-race party on the Columbia Yacht Club ship was unique and impressive.
Goodie Bag (includes shirt): The light-green, pre-shrunk polyester/cotton blend t-shirt is soft and stylish, prominently featuring the underwear-clad bum logo of the race. There’s also a Qdoba coupon, a copy of the latest issue of Chicago Athlete and a pack of gum. The post-race party included a free Mike’s Hard Lemonade.
Weather: Good conditions for an evening run—low eighties, overcast and windy, especially on the return trip north. Some light rain at the start of the race cooled things off. (Zach Freeman)