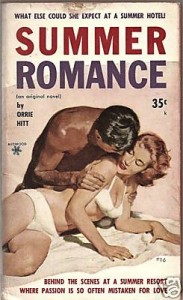 I woke up freezing, groggy and very naked.

I had no idea where I was. The most I knew was that I was under a thin, blue sheet—like Michael Fassbender’s character was in the opening scene of “Shame”—only without the sex addiction. The self-loathing was there, however.

Wiping at my watery eyes, I turned my head to regard the figure next to me. Face in the pillow, a mass of dark curls, an errant arm placed in such a way that I saw one closed eye, sooty lashes against ashen skin. It took me too long to recognize the guy lying next to me.

He awoke shortly after this utterance. Or perhaps it was because I careened off the bed to pick up my clothes, like Bambi, only hung over and completely jaded. I felt like a miserable trope, yet another twenty-something girl waking up in a stranger’s bed, rushing to get dressed in order to vainly maintain dignity that no longer existed.

“You’re freaking out,” he half-drawled half-chuckled, in that way of his that seemed boyish and charming in the blind haze of Jose Cuervo the night before. In the weak morning light, however, it seemed snide, mocking and unbelievably cocky. It was infuriating.

“No I’m not,” I replied, meek and tired, struggling to get dressed with shaking fingers. I composed myself as best as I could. I couldn’t lose control of this situation, could I? I cut him off before he could say anything else. I wouldn’t be made a fool.

“Let’s be fuck buddies.” My offer. It meant noncommittal, unfettered and easy. The idea, in my emotionally unavailable mind, was romantic in a perverse way. He’s a guy, I reasoned, oversimplifying the situation (as always). He’d jump at the opportunity.

“Friends with benefits?” He countered. My lips stretched into a tight, cold smile. Control returned to my grasp.

“Yeah, but we’re not friends.” It, in my defense, was true. It remains true.

Prior to the ill-fated, alcohol-fueled night before, he was merely a classmate. A friend of a friend. I had never had a conversation with him. I had been in his presence before, during a conversation he was engaged in with a friend I was with. I stood, silent and uncomfortable, while they spoke above the din made by the concession stand. We didn’t so much as look at each other.

We barely knew each other’s names.

“Don’t we think we know each other a little better now?” he asked, gazing up at the low ceiling. When I didn’t respond right away, he looked down at me. I laughed, humorless and hollow. I found myself doing that a lot around him.

For the sake of becoming a more socially capable and well-adjusted person, I had agreed to go out with him. He thought we ought to “get to know each other if we’re going to continue (or is it begin) to hook up.”

I whined to my friends. “Do we need to know each other to have sex?” A unanimous, resounding, “yes” had my face falling. And so I begrudgingly accepted his offer. We’re not calling it a date, I insisted.

I was fifteen minutes late to meet him. He was scattered, coming down off of Ritalin. It was the first hundred-degree day of the summer. I sat through an hour and a half of two mid-level improv groups waxing poetic about chicken wings. He found it hilarious, casting the occasional glance in my direction to see if I echoed the sentiment. The night was full of grim smiles and dead chuckles. I couldn’t stop wondering about what I had gotten myself into.

“Your problem is that you care too little. My problem is that I care too much,” he said with a pretentious wave of his hands, as if the gestures would add more depth to his statement. We hadn’t gone out in public again after the disastrous night with my least favorite form of comedy. Needless to say, he got the hint. But now the majority of our pillow talk consisted of what we were and weren’t to each other. I almost wished for more improv.

“I just… Don’t want to get attached,” I finished lamely. I immediately regretted what I said, feeling what little control I had slipping away.

“We both know what this is,” he said, matter of fact. I do, do you? I know exactly what this is, I didn’t say. I was glad it was dark, and that the central air provided enough white noise to mask our uncomfortable silence.

“Well, I’m attracted enough to him to have him inside of me, but not attracted enough to be with him.” My friend grimaced before saying, “pretty sure it’s supposed to be the other way around.” I blinked before shrugging blithely. By this time, he and I had established a surprisingly efficient rapport in which we only met up under cloak of darkness and parted ways just as the morning traffic picked up for the day. It was going as well as it could.

“Whether you like it or not, we’re in a casual relationship.” He said in that self-assured, know-it-all way that incited such a visceral reaction from me. I felt the proverbial gears grind to a halt.

“No, we’re not.” Ever the eloquent one, I was. I had no rebuttal. Just when I was getting comfortable in our together-but-not-together arrangement, the bastard had to use the insipid ‘r’ word.

“Well, even a friendship is a relationship,” he said defensively, voice picking up contemptuously.

We’re not friends, I wanted to scream. I didn’t. I think I just laughed, again, without feeling.

“I feel like you’re always laughing at some joke that I don’t know the punch line to,” he said, and he sounded so weak. Don’t do this, I thought, don’t complicate this. I don’t know when it happened, but we had slipped into limbo, the dreaded grey area in which we were no longer strangers but not quite friends. I didn’t want a relationship from anyone, and all of sudden I felt like I was in a failing relationship with him. The irony didn’t escape me.

But I might have to run away from the arrangement.