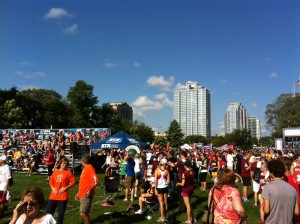 Breakdown: Combining team spirit with athleticism in a way that even those of us who never represented our alma maters in an official competition could take part in led the BTN Big 10K to sell out before race day, despite the fact that this is only the race’s inaugural year. The promise of a tailgate party afterward probably didn’t hurt. Runners were able to choose which school within the Big Ten Network they wanted to represent when registering for the race, with each school getting a unique shirt in their color. It sounds a bit gimmicky but it made for the most race shirts I’ve ever seen worn on race day (aside from the Nike Human Race, obviously) and a more exciting event all-around. With inflatable slip and slides on the course and near the starting line, school mascots dancing around and a booth for every university, the BTN Big 10K sometimes did feel like a big tailgating party. Except that you had to run at least three miles to get to it. Though it’s standard to start longer runs first (since they take longer to finish), the 5K started twenty-five minutes before the 10K, providing a clear course for both races.

Price: $45 for the 10K, $35 for the 5K
Course: Starting and finishing at Soldier Field with an out-and-back heading south on the Lakefront Trail. Nothing out of the ordinary for frequent runners, but an inflatable slip and slide at the halfway point was a welcome and fun surprise.
Organization (gear check, etc.): Lots of volunteers throughout with plenty of water and Gatorade. The tailgate party was set up nicely, with university booths encircling the border and a set of bleachers in the middle. It was a little annoying that the after-party grounds were blocked off before the race, forcing all runners to cross through the crowded port-a-potty lines to get to the starting chute.
Goodie Bag (includes shirt): The team shirts (with school names and shirt color signifying who you were running for) were the big prize here as the rest of the goodie bag consisted of fliers. Every participant got a free hot dog at the post-race party.
Weather: Mid-seventies with a cool breeze coming off the lake and enough clouds to keep it from getting too hot. (Zach Freeman)