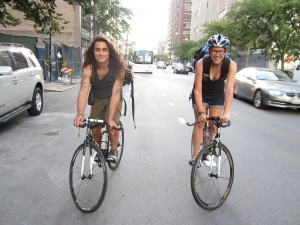 Mayor Daley’s campaign to host the 2016 Olympics in Chicago failed, but local bike messengers are realizing their dream to bring the Olympics of two-wheeled delivery to town. As the athletic action heats up in London, this weekend hundreds of couriers from around the globe will converge in our city for the 20th Annual Cycle Messenger World Championships, with a packed schedule of races, arts events and parties celebrating their unique lifestyle.

The championships take place from Thursday, August 2, to Sunday, August 5, with the main competitions happening all day Saturday and Sunday in the south parking lot of Soldier Field, 18th Street and the Lakefront Trail. Other highlights include track racing at the Ed Rudolph Velodrome in Northbrook, a nighttime “alleycat” (messenger-style race in live traffic), a movie night with courier-themed films, an opening party featuring punk-rock legends Agent Orange and the infamous Messenger Prom. Check out the full schedule of events at chicagocmwc.com/plan.html.

After work last week at a River North dive bar called Snickers, as Metallica blared on the sound system, Christina Peck and Nico Deportago-Cabrera, two of the key organizers of the “champs,” offered background on the event and a preview of what to expect. Christina formerly rode for Intercept Courier and now does fleet maintenance for Zipcar, a car-sharing service, by bike. Nico is an owner-rider with Four Star Courier Collective, Chicago’s only worker-owned courier company.

“Messengers are notorious for talking up how fast they are or how much work they’re capable of doing,” Deportago-Cabrera says. “The world championships are a chance for people to see who’s the fastest. But they’re about more than just competition. This is a yearly gathering where you get a chance to meet people from all over the world who do the same things we do, who share the same relationships with our bikes and with our cities. It’s like a big family reunion.” 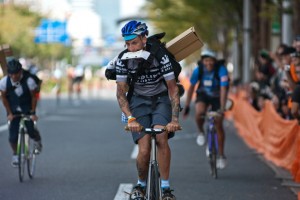 Peck says roughly 350 competitors are expected, with contingents coming from all over the United States, Canada, Central America, Europe, Japan and Australia. “We’ve already got someone in town from Lausanne, Switzerland, which is where the championships are taking place next year,” she says. “When you start seeing hundreds of people with messenger bags riding around town in a pack, you’ll know what’s going on.”

The main competition at Soldier Field will simulate a day of work as a Chicago courier, according to Deportago-Cabrera, who designed the course. “We’re essentially constructing a city on the course that mimics the Loop with one-way streets and checkpoints that are like office buildings,” he says. “You’re going to be delivering boxes and envelopes, the things we carry in our bags every day. It’s not only going to test how fast you can ride but how smart you can ride and how well you can coordinate your deliveries to be as quick and smooth as possible. The one who can do it the most efficiently will be the messenger world champion.”

The idea is to give the visitors a sense of what it’s like slinging packages all day in the Loop. “A huge thing about Chicago is it’s flat and it’s built on a grid,” Peck says. “The most challenging thing about this city is the weather, and that even if you know where a building is that doesn’t mean you know how to get into the building. It takes a while until you know how to access the loading docks, or learn which security guards you can sweet talk to get into the building a different way.”

Non-messengers, a.k.a. “civilians,” are welcome to compete, but Deportago-Cabrera cautions that even the fastest Lycra-clad roadies might not be able to handle the logistical challenges as well as the average courier. If you aren’t the competitive type, spectating should be a blast as well, and there’s no charge to watch. “I really enjoy racing cyclocross [steeplechase-style racing on heavy-duty road bikes] and the coolest thing about ‘cross is that it’s on a closed course so that everyone can hang out and watch and get rowdy,” Peck says. “The championships are going to be like that. We’ll have a beer garden set up with cheap PBR and Old Style and a nice view of the race.”

Deportago-Cabrera adds, “The course is designed so there’ll be plenty of good places for people to camp out, watch the race and heckle the riders. There’s something punk rock about messenger races, where you can take yourself seriously but every now and then you have to laugh at yourself.” Accordingly, the last major messenger gathering here, the 2008 North American Cycle Courier Championships in Garfield Park, featured plenty of tomfoolery. Race volunteers portrayed rude mailroom staffers and grumpy security guards, and a guy in a chicken suit stole the bikes of couriers who didn’t lock up before making deliveries. Deportago-Cabrera and Peck promise there’ll be plenty of similar shenanigans this weekend. 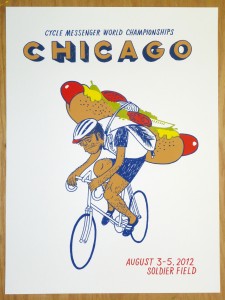 Peck also recommends that civilians show up for the Messenger Prom, now in its eighth year, Saturday at 8pm at Groovemaster Studios, 1719 South Clinton. The cover for unregistered attendees is $15 for singles, $20 for couples and $10 for dates of registered racers. Expect to see plenty of scruffy couriers and their pals dressed in a wide range of ironic eveningwear: everything from powder-blue tuxedos to slinky sequined dresses to giant banana costumes.

The organizers hope that spectators at the champs will get a better idea of what messengering is all about. “If you’ve ever wondered about that person that you thought was an idiot for cutting [blowing a red light in] some intersection downtown, what was going through their brain, you should come check out the championships,” Deportago-Cabrera says. “This event is a celebration of messengers, but we’d love for the rest of the city to join us and get a taste of what it is we’re into, what makes us tick.”

Roger DeLanghe Trophy Bike Race This “brutally fast” fifty-lap contest features a salute to DeLanghe, who ran the photo finish camera at the velodrome for many years. Ringed by evergreens, the track is a serene place to spectate. Thursday, August 9, Ed Rudolph Velodrome, 1479 Maple, Northbrook, (847)291-2985, tinyurl.com/ervelodrome.

It’s so good to see that a rookie wanna be rockstar and a messenger groupie who worked on the street for MAYBE a year a couple years back think they have the insight or the right to speak for the Chicago courier community. If it wasn’t for spoiled rich kid transplants like these flooding the market with their willingness to work for barely anything just so they can say they are a messenger maybe the actual hard working couriers who could give two shits about these fakenger kids little popularity contests and come to work everyday no matter what could… Read more »