by Brian Hieggelke
August 2, 2012Filed under: 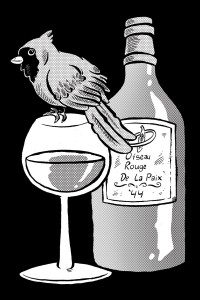 I peeled open stoned eyes and saw my rubber snow boots. I stuck my feet inside without pausing to zip them up. I staggered around the corner to the twenty-four-hour mart for a five-dollar wine bottle, while I counted time on one hand.

I started drinking as a teenager. I seriously wondered why everybody didn’t drink, all the time. It turned into a daily addiction. For near twenty years I was recklessly wasted. Wine, I imagined, made me sophisticated. At times my happy-hour drunkenness got so I curled up outside my door, in the hallway. Other tenants shook me awake and asked if I was okay. I was lucky to have a job, but it was in jeopardy. I’d let nothing impede my drunken interruptions.

My father’s pancreatic cancer diagnosis did. Shawn, my twin brother, phoned me and explained what this news meant. After learning his dire prognosis, I stayed locked up in my apartment. I kept an eye on the phone cord, making sure that it didn’t accidentally get plugged back in. My sisters and brothers left answering machine messages.

“You know you’re the only one without a family!” I heard.

“Do you feel okay with yourself letting him die in a nursing home? Well?”

My head buzzed frantically, yet I somehow managed to dial one of my sister’s numbers correctly. I slurred, “Don’t worry, I’ll get on the next train—but I might smell a little like wine.” Click.

I went to be near my daddy as he began to stop living. My mother had recently died. My father was dying, and I was moving back home.

My parents raised nine children in a three-bedroom house on the outskirts of Chicago. I grew up as ten other family members roared with laughter at our colossal dinner table. I never understood the joke.

The night I moved back, I took extra Xanax. I slept on a bed opposite my dad and lived there for ten months. When I arrived, he seemed okay. Then, daily, his physical body visibly closed, for good. All I could think of were reasons to tell yet another sister that I absolutely needed her to bring me a bottle of wine. Initially, they supplied me with a dozen bottles, before sensing my exaggerated desperation. I literally chugged the bottles in a bedroom closet so my dad wouldn’t know. I know he could smell it. My father, a nightly beer drinker, no longer drank at all after his instant change of fate.

He slept in a bed opposite me, and I took care of him.

In his last week, he lay motionless. On one of those days in that final tenth month, I witnessed my father talk to angels with stunning clarity. It was as if he had magically reawakened. He held animated conversations with people that he saw, that he’d known, from throughout his life. He made lively gestures with his arms and hands.

Then he went to be with those angels, or his spirit went elsewhere. His family grieved, and it was time to leave.

Pretty much immediately after I began living with my father, I surprised everybody and quit drinking. Shockingly, the cravings left. I did not expect I’d cease to imbibe in this lifetime. I wasn’t even trying to quit, seeing I’d already spent a number of years trying, a losing battle.

I grieved, knowing that I’d never again hear, smell, talk to, or love either of my parents. Nor would I feel the kind of love they had for me. I’ll not be a mother, but I know what it means for a parent to love a child. I felt what I lost. Support was available, as in having four great sisters, and four great brothers. But I live alone, and work alone.

As I tried to make sense of the afterwards, I returned to my same old Lakeview apartment building. Despite being sober, I felt weighed down. It was a depression so heavy my family probably wished I were drinking again. I function best on almost ten hours of sleep—one piece of evidence that I’m not a mother. But at that time in my life I slept for fifteen or twenty hours at a time. My body craved the sleep, the chance to not feel.

But a new and extraordinary joy found me, and then I started walking to find it instead of sleeping. I’m a former wino turned bird watcher.

During the years that I rollerbladed on the lakefront path, starting at Belmont Harbor, I always went south. I have no idea why. But one day after I returned home from my father’s death, I went north for a change. I finally felt I had a bit of energy, after all that sleep.

It was something I heard that drew me further into Montrose: I heard bird sounds, and followed the noise into a windswept sand dune. I had no idea where I was, but I saw some of the birds. Some were brilliantly colored in one hue, while others wore combinations of striking colors.

My pace quickened on the way back home. I jumped behind my computer, onto the Internet. I learned that the charmed, flowered honeysuckle plant was responsible for the Magic Hedge. Birds are drawn to honeysuckle, like bees to honey. I can smell its sweet odor, and birds can eat its nectar.

In the middle of the last century, our nation’s military hid from the Soviets behind coiling honeysuckle plants at Montrose, using the honeysuckle to disguise their military bases, to protect them from Russian projectiles. The first soldiers assigned to Montrose Point barracks had ammunition and guns. In 1954, the guns were replaced with ones thirty feet high, slender, Nike Ajax, surface-to-air missile systems. The Nike launchers were aboveground, the storage magazines underground. But the Nike Ajax missiles only had a range of twenty-five miles.

I was startled by their proximity to Lake Shore Drive’s residential buildings. These military sites were not on a military base, testing national law. Chicagoans complained, technology advanced and by the early seventies, the Nike capabilities were phased out.

Today, this potential site of battle is the Montrose Point Bird Sanctuary, internationally known not for its military capabilities but for attracting birds as a migratory pit stop. Butterflies, likewise, are allured by honeysuckle. Spring and summer, a myriad of butterflies are abundant, in and about the sanctuary. At times the painted shades of butterflies and birds are near each other, and it’s simply spectacular.

Since the eighties, birding organizations and the Chicago Park District have enhanced bird-friendly plantings in and around Montrose to help improve the habitat and to continue to attract tens of thousands of migratory birds—even though the pit stop is entirely manmade.

So I began these cathartic, peaceful, pleasant, morning walks, on or near the lake path, heading north from Irving Park to the Sanctuary.

Growing up, we never took vacations or traveled. My dad, an ambitious construction worker and my mom, raising all nine of us, found beauty where we were, in our Park Forest home. My parents never complained about what we didn’t have. We had love and laughter.

My joyful discoveries at The Magic Hedge bring me back to the joy of growing up, free in cost as well as spirit. Finding loveliness near my city home has helped me transition from the suburban home I grew up in. One of the first mornings there, I saw two white-winged doves fly above me. That’s the first time I really felt my parent’s presence.

My mom loved the really red cardinals. Park Forest is still a pretty, tree-filled suburb, and our yard had its share of birds. Yet whenever my mom spotted a cardinal, she said, “Look at how beautiful, look at that,” and she smiled. When my mom went blind, every time she heard a cardinal she said, “Listen to that, just listen,” and she smiled.

One of the first birds I stared at was bright pink with red stripes, a shiny large black beak and a rather wide wing span. I’ve researched all species of birds since my first Magic Hedge excursion, but I don’t think I’ve seen it since, even in a photo or drawing. I’m a kindergarten-level birdwatcher. I hope that in becoming a better birdwatcher, I’ll some day be more confident in spotting the rarities. Still, I’ll never be a true birder—I completely lack a birder’s sheer dedication. A birder’s skills are advanced, and birding is considered a sport. The true experts develop into what’s known as a twitcher—they’d likely be insulted to be labeled a birder and terribly insulted to be considered a mere birdwatcher.

Many birders use complicated auditory and visual birding equipment. I use my naked eye. If I were to use equipment, I’d be afraid of losing the moment. I wonder if a birder or twitcher would be envious to see the plethora of water birds I get to see, though. Water birds, like the Black Rail, love to waddle along the shoreline. And visiting the sanctuary lets me say things like, “I was next to the chokeberry there and watched them there Sandwich Terns, Brown Thrashers and believe you me, them Painted Buntings went and criss-crossed in the sky.”

Shall I continue? There are Townsend’s Solitaires, Grace’s Warblers, Golden-crowned Sparrows, Lark Bunting and Eurasian Tree Sparrows. And Thrushes, Sparrows, Purple Martins, Woodpeckers, Common Yellowthroats, Catbirds, Red-winged Blackbirds, Mourning Doves and Brown Thrashers… And in winter, you can see the Northern Saw-whet Owl, the Snowy Owl, the Snow Bunting and the Lapland Longspur.

Birds that I see in flight remind me that my parents are still with me. Quitting the drink gave me the capacity to appreciate the visual feast, silence and stillness of bird-watching. I believe in miracles. One happened when I chanced upon The Magic Hedge, and today, I can see and feel my parent’s spirits when the birds are flying.

Published by Newcity! I’m honored. This piece deviates from my frequent comparison of historical periods, because, it’s way more personal.

However, moreover, the answer lies in history.