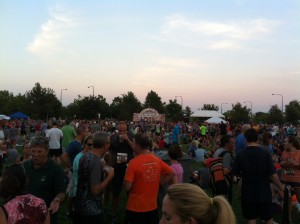 Breakdown: The Terrapin 5K and Music Festival has grown quickly since 2009, selling out this year after hitting the registration cap of 4,000 runners (of which 3,543 showed up on race day and completed the run). Milking the pre-Lollapalooza music festival vibe that’s in the Chicago air in early August, RAM Racing has expanded the music-festival part of the event, with race grounds including two stages, merch tents, LOTS of port-a-potties and plenty of food and beer (runners get one free Magic Hat beer along with a quesadilla and donut as part of their race entry). The 5K itself is tightly run, with pace groups setting out every two minutes to keep the course from getting too crowded. And when it comes to post-race partying, Terrapin delivers the goods in the form of six musical acts and a relaxing festival environment.

Price: $45
Course: Kicking off in waves just south of Soldier Field and heading out through the McCormick Place tunnel, the course headed south to 31st Street before turning around and following the Lakefront Trail north after the course’s sole water station. It was nice to have an out-and-back where the “out” and the “back” were on different trails.
Organization (gear check, etc.): For the most part, these guys have events like this running like a well-oiled machine. There was a slight back-up at post-race gear check as most people in the same corral were also in the same number range—meaning everyone’s trying to get their bag at the same time. But the delivery of food, beer and music was organized for maximum efficiency.
Goodie Bag (includes shirt): Like other RAM racing events, ads prominently feature the grey race shirt with the phrase “This Is Your Goodie Bag!” It’s a stylish shirt, but the unisex sizing means females should think about getting a size smaller than usual. Race entry also included tickets for post-race “munchies” (a cheese quesadilla and a donut) and “brewski” (two Magic Hat varieties to choose from).
Weather: It was around ninety degrees at race time which made for a pretty hot evening run. Things cooled down for the post-race concerts after the sun went down. (Zach Freeman)

Really? RAM Racing promotes having the “best goodie bags” and can’t even do gender-specific shirts?? Come on. I’ve been at smaller races that had women’s sizing.