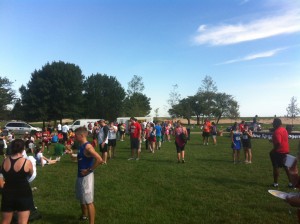 reakdown: Overall, this is a well-organized, medium-sized (around 1,000 participants in both distances) race starting and ending near Montrose Beach and mostly following the Lakefront Trail. The post-race party was especially generous, including a free breakfast of sausage and eggs as well as a 312 beer (or orange juice for those under twenty-one) along with some peppy live entertainment. Unfortunately, there were two major flaws in the course organization for the 10K—both involving turnarounds—that really affected the racing experience. At the two-mile turnaround between Hollywood and Ardmore, the first fifty or so runners (including this reviewer) ended up completing an additional two-tenths of a mile due to a lack of on-course direction. Similarly, the southernmost turnaround near the totem pole was unclear and a bit unsafe for an open course. A few participants in the 5K (which started thirty minutes after the 10K) told me there was also confusion near the mile-and-a-half turnaround of their course. Race organizers should either recruit more volunteers or mark out a clearer course next year.

Price: $45 for the 10K, $35 for the 5K (w/ increases to $50 and $40 near race day)
Course: Starts near Montrose Beach and finishes on the sidewalk just north of the Montrose/Simonds intersection in Montrose Harbor. A few flaws in the course design and on-course direction significantly marred the otherwise enjoyable open course.
Organization (gear check, etc.): Easy registration and packet pick-up. Gear check was super organized. More volunteers were needed on the course, especially at the key turnaround areas. This was the first time I’ve seen styrofoam cups of water at a finish line.
Goodie Bag (includes shirt): Lots of stuff here. The racing bib features a ticket for a free breakfast (sausage and eggs), a nifty Champions Run pint glass and a free 312 beer. The front of the red dri-fit running shirt prominently features the Champions Run logo, but I’m not a huge fan of the word “Participant” plastered across the back. A number of flyers for future races across the Midwest and a coupon for $10 off at Bull and Bear or Public House for race day brunch were also included.
Weather: Just shy of seventy degrees with a light wind. Nearly ideal weather for a morning run on the lakefront. (Zach Freeman)