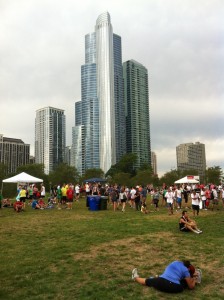 Breakdown: Making good use of a nice location at the southern end of Grant Park for its base camp, the inaugural Chicago 10K mostly relied on the Lakefront Trail for its course, improving the familiar path with a hefty amount of hydration stations, excited volunteers and a clearly marked course. Though the race was sold out, it was clear that coordinators kept the number of runners at a manageable number for this race’s first go-round (around 2,000). Chicago 10K is a bold name for a new race in a city that already has so many 10Ks, but from the smooth way this race was run it seems race organizers are strategically looking to make their mark and let positive word-of-mouth help make this an annual event. A very entertaining live band—Ear Candy—played an eclectic mix of pop covers before and after the race.

Price: $50-$60 with rolling price increases
Course: Starts and finishes at Arvey Field at the southern end of Grant Park. Though it was an open course, everything was very clearly marked (often with multiple flags, cones and volunteers) and proper precautions were taken for the safety of race participants and those out on the trail for their morning workout. Putting a hill at the last tenth of a mile before the finish line was a gutsy move that gave runners one final challenge before finishing.
Organization (gear check, etc.): Keeping everything contained in a relatively small base camp worked out well, with gear check on one end, the start/finish line on the other and everything else (including a large stage with a live band) in between. The line for post-race photos got a little lengthy—having more than one photographer would have paid off. No race day packet pick-up might have been a hassle for busy folks, but they did allow third-party packet pick-up and three days to work it into your schedule.
Goodie Bag (includes shirt): Included an attractive (if a bit impractical) commemorative race poster and a simple but stylish white FINISHER cotton shirt. Typically I’m not a fan of tagging shirts with FINISHER but this one worked nicely. Runners could also upgrade to a Syntrel running shirt with the same design. There was also a really nice-looking medal at the finish.
Weather: Mid-sixties and overcast. Great weather for a run. (Zach Freeman)