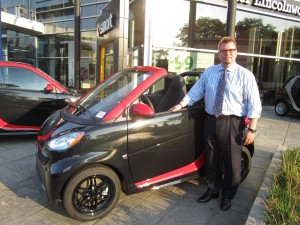 It’s no secret that I dislike automobiles, or rather Chicago’s over-dependence on them. Privately owned autos, especially big ones, contribute to all kinds of problems in our region, including traffic deaths, congestion, climate change, obesity and urban sprawl. Car parking gobbles up valuable land, with Chicago’s on-street parking alone occupying an area roughly the size of Hyde Park, not to mention the hundreds of acres used for parking lots. The first Mayor Daley carved up the city with expressways and allowed Louis Sullivan masterpieces to be razed for garages, and an eight-lane superhighway cuts off residents from one of our city’s greatest assets, the lake shore. 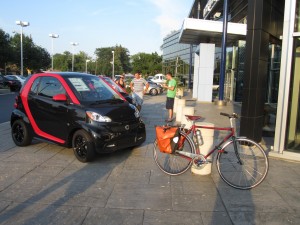 On the other hand, there are understandable reasons why Chicagoans might want to purchase an auto, as opposed to occasionally renting one or using a car-sharing service. These include long commutes to distant neighborhoods or suburbs that might be daunting by other modes, the ability to give rides to friends and family, the need to haul gear around town, road trips to Wisconsin and more. I do believe there’s such a thing as responsible car ownership, and it’s possible to include driving, along with walking, cycling, transit and cabs, in your toolbox of transportation modes.

But a large percentage of Chicago car trips involve only one or two occupants. So for those who feel they need to own a car, could two-seat “microcars” like the Smart car, a Mercedes-Benz product, help mitigate some of the harmful aspects of driving? These tiny vehicles, measuring about eight feet long by five feet wide, go against the grain of America’s traditional “bigger is better” mentality.

I recently caught a TV ad for the Smart showing politicians, businessmen, and a Beyoncé-like R&B diva extolling the virtues of “Big, big, big.” At the end of the spot, a young man gazes out a boardroom window, sees the miniature car pull up and exclaims with wide-eyed wonder, “Small!” followed by the tagline, “The space-saving, eco-friendly, totally unique Smart. Unbig. Uncar.”

Intrigued, last month I pedaled up to Loeber Motors, a Smart and Mercedes-Benz dealership in north-suburban Lincolnwood, for a test drive. When I get there, Bobby Becker, the mild-mannered salesman, escorts me to a sporty, red-and-black convertible. I settle into the cockpit-like seating area and take the car for a spin around the ‘burb. I’ll confess that the car is a blast to drive, with its go-kart-like handling and super-tight turning radius. With the top down, I’m caressed by the breeze as I cruise by a carnival in a nearby park and gaze at flags of many nations waving along Lincoln Avenue. And obviously the thing is a no-brainer to parallel park.

Afterward I sit down in the mod showroom with Becker to discuss the selling points and possible societal benefits of the two-seater. The basic Pure coupe model starts at about $14,400 while the Cabriolet convertible runs between $19,000-$22,000. Due to their relatively light weight and efficient engines, Smart cars get thirty-five to forty miles per gallon in the city and forty-four to forty-eight on the highway, about twice the mileage of a mid-size Mercedes, Becker tells me. 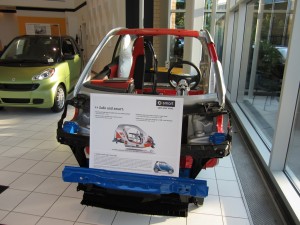 The European version of the Smart, with a three-cylinder diesel engine, gets even better mileage than its American cousin, about seventy to seventy-five miles per gallon on the highway and in the mid-sixties in the city, Becker says. The diesel vehicles are not available in the states yet due to United States regulations, but he predicts the law will change soon and the diesel cars may arrive here in the next year or two. He adds that a full-electric version will be available by this winter with a ninety-five to 110-mile range per charge, estimating it will sell in the low-to-mid-$30,ooo range.

Economic and environmental issues aside, are the cars practical and safe to drive on expressways and interstates? “You can drive ’em anywhere you would drive a full-size car,” Becker says. “They have a top speed of ninety miles per hour. I’d hop in one right now and drive it to Southern California—no worries, no issues, no problems.”

He says the Smart received high safety ratings from the Insurance Institute for Highway Safety due to its innovative design. “On bigger cars you’ve got mass,” he says. “The Smart is essentially like driving a car with a giant roll cage around you.” Becker also agrees with my hypothesis that smaller, lighter cars pose less of a danger to pedestrians and people on bikes than big ones.

As for the Smart’s potential to reduce the amount of land paved over for parking, he says in Europe it’s common to see three of the microcars parked perpendicular to the curb in the space of one standard parallel parking space. “That’s part of the fun of the car, to have a minimal footprint,” he says. Unfortunately a Chicago ordinance prohibits parking cars perpendicular to the curb in a parallel spot.

For a different perspective I contacted Sharon Feigon, head of I-GO, the car-sharing company run by the local nonprofit Center for Neighborhood Technology. “Even though we’re a car-sharing service, our first approach to the problems of mobility and congestion is non-car strategies,” she says. “Smaller vehicles are not the solution, but I do think they’re a step in the right direction.”

I-GO’s roster of rental vehicles, about half of which are hybrid or electric, also includes the Fiat 500, another two-seat microcar. About the same size and gas mileage as a Smart, it starts at $15,500. “They’re very popular with our customers because they’re very efficient, they’re small and they’re cute,” she says.

“The main point is that we need to put a lot of effort into making sure people have a lot of transportation options so they don’t need to own cars,” Feigon concludes. “And if they do feel the need to own them, the best car is the most efficient one you can get.”

Toast to the Elston Bikeway Raise a glass to the new protected bike lane on Elston Avenue and sign thank-you cards to Rahm, the aldermen and CDOT at this social organized by The Active Transportation Alliance. Thursday, August 16, 5:30pm-6:30pm, The Hideout, 1354 West Wabansia, (312)427-3325, activetrans.org; free.

Tour of Avondale Learn about the history of this Northwest Side neighborhood, which was once home to a thriving brick-making industry and still has many attractive masonry houses, on this guided bike tour by architecture buff Lee Diamond. Saturday, August 18, 11am-3pm, Brands Park, 3259 North Elston, (773)255-6347, chicagovelo.com;$9.

Chicago South Side by “L” This train excursion traces the development of several South Side neighborhoods, including Bronzeville, Chinatown and the South Loop. Saturday August 25, 9:30am, Chicago Architecture Foundation, 224 South Michigan, architecture.org; $20.