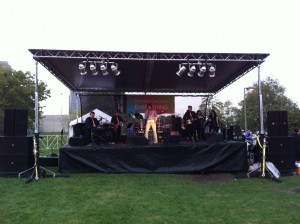 Breakdown: What better way to show your respects on the eve of the thirty-fifth anniversary of Elvis Presley’s death than by running a 5K that declares that he never died? Now in its fifteenth year, the Elvis is Alive 5K—promoted as the “original night race and party”—followed an open course along the Lakefront Trail, starting and finishing across from the Columbia Yacht Club. Organized by Fleet Feet, it included an all-Elvis starting corral (reserved for runners dressed as Elvis from head to toe), live music from Elvis tribute artist Joe “Elvis” Tirrito and beer from Goose Island (the first was included in the price of the race and they were $5 each after that). Despite the damp ground from a steady rain all day, it looked like runners were enjoying the post-race party area, which included one of the inflatable slip ‘n’ slides from last month’s BTN 10K. Though it’s an untimed run, awards were given to the top three finishers of each sex as well as the fastest Elvis.

Price: $30
Course: The Lakefront Trail is a busy place and getting over a thousand runners out there on an open course in the evening can be a tough move, but Fleet Feet had plenty of volunteers keeping everyone safe. It’s a similar course to other evening runs that start and finish near Columbia Yacht Club, circling under Lakeshore Drive near Museum Campus. The finish line is a bit of a tease as you have to run north past it before looping around to cross it heading south. Only one water station around mile two.
Organization (gear check, etc.): Extremely well-coordinated with lots of volunteers scattered across the course and at the post-race party area. Mile markers with running clocks and a finishing chute were impressive bonuses for an evening fun run.
Goodie Bag (includes shirt): Blue soft cotton t-shirt with the race’s logo on the front and “Fleet Feet Sports” on the back. One complimentary Goose Island at the post-race party.
Weather: Low seventies with a cool breeze. It rained all day but stopped in time for the race. (Zach Freeman)