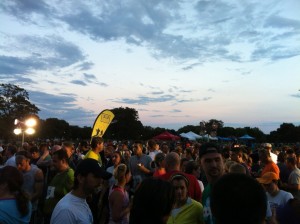 Breakdown: After more than three years as a monthly Universal Sole fun run, starting and finishing at Universal Sole Lakeview before heading to the nearby Fizz Bar for, well, burgers and beer, the Burgers and Beer 5K made its debut as an official 5K run in Montrose Harbor tonight. And though both the burgers and the beer were likely the major selling points for most registrants, the out-of-the-ordinary Monday evening race time (in keeping with B&B tradition), smooth Montrose Harbor course and relaxed post-race party atmosphere helped make this race feel like a success. With around 600 participants showing up for the inaugural run, race director (and Universal Sole owner) Joel Feinberg proudly proclaimed at the starting line that “when the city sees how many runners we had tonight they’re going to let us block off the street next year!”

Price: $40 (+ $5 to include burger and beer)
Course: A slight twist on the normal Montrose Harbor 5K course following the various running paths (and part of the Lakefront Trail) north to Foster before turning around and hugging the lakeshore for the final mile. More than other Montrose Harbor races, it felt fast; so much so that Joel Feinberg made sure to reiterate that the course was a certified 5K.
Organization (gear check, etc.): The distribution of the burgers could have used a little more coordinating. There were two lines and while both got pretty lengthy, one was especially poorly placed as it took up the majority of the “beer garden,” making it a crowded place to enjoy your post-race grub. Depending on when you picked up your packet, the pint glasses hadn’t yet arrived, but they were available for pickup on race day. Quick award ceremony followed by an impressive raffle.
Goodie Bag (includes shirt): Somewhat unremarkable white tech shirt with the burgers and beer logo (a smiling runner holding a burger in one hand and a beer in the other) and a quality pint glass that’s cool enough to show off. For $5 more a tasty post-race burger and a can of Goose Island 312 were included.
Weather: Low seventies—pleasantly cool during the race and then a near-perfect late summer evening once the sun went down. (Zach Freeman)