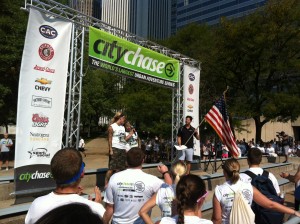 Breakdown: While traversing the city on foot or using public transit (with CTA day passes included in the entry fee) brave teams of two complete challenges as varied in difficulty and duration as letting a millipede crawl on your face while a snake slithers down your shirt to bowling in the buff to chicken wrangling to getting down in the sand for a mini Marine basic-training camp. Believe me, the list goes on. The organizers claim that those competing in City Chase will have done more in six hours than most people do all summer. That may be a bit of an exaggeration but participants will definitely be doing a lot of work (both physical and mental) and covering a lot of ground. There’s no set course, with thirty challenges scattered around the city and a cryptic guide sheet that must first be obtained via clues and deciphered before being used.

This is City Chase’s sixth year in Chicago so there are many repeat competitors who have a slight edge based on their knowledge of challenges from previous Chases, but even though it is technically a “competition” teams always seemed happy to run into each other and pass on helpful tips and/or warnings. A sense of lighthearted fun is played up throughout—from an announcer making a surprised contestant sing the national anthem before the competition kicked off to the monster post-race party at Moe’s Cantina—but, make no mistake, City Chase is an intensely exhilarating challenge that engages both mind and muscles from start to finish.

Course: Most of the city of Chicago is included in the boundaries of the course, though many of the challenges are centered around the Loop and near train stations. One of the more popular challenges involves rappelling down the towers at the end of Navy Pier. But get there early as a line builds up quickly. Expect to do a good deal of running/jogging and to become quite familiar with Chicago public transit.

Organization (gear check, etc.): For an event with so many moving parts I didn’t see anything that seemed disorganized (aside from the piles of quickly stripped-off clothing in the bowling alley). Some of the more popular stations had longer lines, but that’s indicated beforehand and should be considered part of the challenge of planning the best route. Volunteers at every station are encouraging and helpful.

Goodie Bag (includes shirt): Canvas gear-check bag from Chipotle, buy-one-get-one-free Chipotle coupon, Red Bull, water bottle, sunscreen and a CTA day pass. The shirt feels a little cheap for an event like this, though depending on the challenges you choose you may have to throw the shirt out at the end of the day anyway. A number of competitors were cutting their shirts up for style or comfort.

Weather: With a high of ninety-one, it was a tough day to be running around the city. The water challenges (particularly one where participants are submerged in a tub of ice water) were quite welcome. Luckily, since cloud cover was sparse, sponsor Neutrogena was passing out free sunscreen at the starting line and a few of the challenge locations. (Zach Freeman)