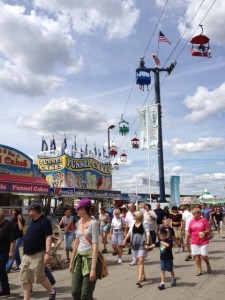 The Fair
The day is impossibly nice: a boundless blue sky, warm in that skin-shivering way, and a breeze with a cool bite to waft the smell of fried dough blows through the air.

It’s Park District Conservation Day at the Illinois State Fair, and my friends and I have yet to see a tent dedicated to the cause. We’re greeted, instead, by a massive wooden statue of a young Abe Lincoln brandishing an axe, flanked by a bed of flowers. From somewhere in the distance, we hear the buzz of racecar drivers circling in front of a rapt audience in the grandstand.

We wander, bug-eyed and slack-jawed at the sight: hordes of people (some of whom are airborne on a ski lift), food carts that line the pavement, the tram led by a John Deere tractor that parts the crowd as it makes its sputtering way through the fairgrounds. A man dressed as Honest Abe saunters past. We stop in shrill indignation at a gate emblazoned with the label “Ethnic Village.” In the village, one can find authentic fare such as “Dracula’s Feast” in Romania, gummy falafel from Persia and turkey legs from “Cajun.”

On the Ethnic Village stage, a group performs West African dances to drums. The bored girls at Persia, who look like they’re still in high school, scowl at the scene. One says to the other, “make the drums stop.” The other responds bitterly, “I can’t.” They share an eye roll and a snicker.

Resting on the ledge is a tip jar marked, “send us to college!”

The Stables
Feeding horses elicits a guttural giggle, booming and joyous, as the animals’ mouths flop almost comically open and shut over our palms. High-pitched cooing echoes in the rafters of the stables as we meet mares and openly (and childishly) gawk at a resplendent white stallion. Patting the creature’s velvety withers results in a nearly spiritual experience as a horse stares directly at me with a black-marbled eye. These animals are massive in the flesh; defined muscles under taut skin. A few doze, others nip at hay, while the rest poke long heads past the bars of their confines to meet their fawning admirers. One, when approached, picks up a bucket repeatedly and releases it against the door. The barn smells of rich manure. It’s cloying, but not oppressive. As we head out, squinting under the sun, a horse neighs.

The Dairy Cows
None of the cows seem to give a shit. We walk through their barn and pass rows of them, lying down and facing the perimeter of the barn. Most of them are sleeping, bloated trunks heaving as they dream, presumably about cow paradise. We’re the only tourists here, save for a handful of people apparently being given a milking demonstration. Standing next to a brown-and-white spotted cow with its head sticking out between the wooden slats, I’m joined by a trio of kids. They stand in a row next to the animal, dwarves in comparison. The oldest one, a girl, speaks excitedly, “this one is like, don’t bother me!” The littlest of the crew, a boy, crouches near the animal—but not before giving me an expectant look. I step out of his way.

The same cow licks my face shortly after, its tongue leaden and gummy.

The Llamas
We come across a large sign: “Come See The Llamas!” Most of the stalls are empty; we soon learn that they are being shown in an arena adjacent to the building. A llama in a blond Afro wig distracts me. Another wears a pair of oversized, pink sunglasses. For some reason, the llamas are standing on antique rugs, a ridiculous oversight on the llama confine planner’s part.

A llama outside of its stall catches our eyes. “This is Gracie,” her handler tells us, a surly, pot-bellied man donning a pair of denim overalls with no shirt. I can’t help but stare at him, with his oversized metal-rimmed glasses, Santa beard and paisley-print bandanna. My eyes fall to his tattooed arms, and then dart away at the first sight of one white-haired nipple. We focus instead on Gracie and pat her cottony neck. She blinks slowly, making a keening noise every so often that sounds like a hybridization of a whine and a moan.

“Does she make that noise when she’s happy, or upset, or what?” I ask. “I dunno, she’s an animal. Animals do things that we don’t know about,” he answers without looking at me.

I press, “Where did you get her?” He replies, pointing to a piece of paper taped to her stall, “If you wanna know about where to acquire a llama…” The makeshift sign offers a phone number and little else.

“So you’re her owner?” He pets Gracie the entire time, gaze never breaking hers. “My wife and I own Gracie. I don’t know who her mom is.” He then moves to tie Gracie to an elaborate metal post, where his wife appears with a neon-colored polyester get-up. The llama that previously occupied the post is led off wearing a pair of electric-green pants.

As we leave the peculiar building, we are almost run over by a golf cart carrying a teen pageant queen in a crystal tiara and purple cowboy boots. She waves to passersby. “I’m not waving to that,” my friend mutters. 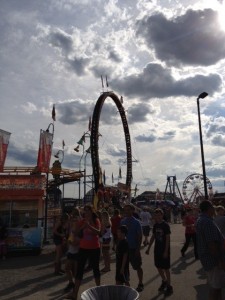 It’s the final day of the fair, Family Day, where tickets are sold for a discounted rate, “to encourage more families to enjoy the last day of the fair.” Coincidentally, we see far less children than the day before. The sky is grey, and a persistent dampness pervades the air. We sit under the massive Food-A-Rama tent and begin our day with fried food. The fried pickles come in a plastic tray—exactly like the ones that carry nachos, but with ranch dressing instead of cheese. They are sour and greasy, and our intestines cry foul.

The Carnival
Tucked away in a corner of the fairgrounds is the carnival, the entrance to which is a colossus of steelwork that reminds me of the city’s scaffolds. The carnies are easily spotted—they look like sinister Target employees with their red button-downs and black cargo shorts. Almost all of them wear black wraparound sunglasses. All of them have the complexion of freshly tanned leather.

We queue up for a ride that looks harmless: it spins like the hands of a clock in the air, back and forth. The gears in the engines make a grating noise like a garbage disposal. By the time the harness goes over my shoulders, I’m chomping at the bit to get off. To my dismay, the gears begin whirring as we’re catapulted into the air. There are ninety-pound children sitting in the row in front of us. They titter gaily. My feet shake uncontrollably against the metal floor as I grit my teeth and look over the candy-colored ground of the fair.

I sit the next ride out. It’s named Freak Out and I don’t want to test my luck. Rainbow-colored bulbs adorn the steel frame. It’s essentially a wrecking bar with seats, swinging not only back and forth, but also in a 360-degree rotation. Again, children under the age of twelve are plopping into the seats, the harness nearly engulfing them. The engine starts, manned by two carnies with the same expressionless faces, and I watch my friends swing nearly fifty feet in the air. The ride, at its peak, is parallel to the ground. Legs dangle over all of our heads. The other observers watch in horrid fascination, with phones raised high to capture the action.

The Ferris Wheel
We regroup for the Ferris Wheel. There are, for some reason, two lines, and the carnie moves back and forth between the two in order to admit people. His gaze lingers on my friend, eyes skimming over her lithe frame and blonde curls. “How are you doin’ today?” He leers. The rest of us plop into the bucket, which is pretty much a glorified plastic cup with walls that don’t go higher than our elbows.

The carnie looks like Matthew McConaughey’s titular character in “Killer Joe,” complete with hawkish features and sneering grin. He looks at us like a predator surveying its prey before asking, “Where are you from?” The question is directed at all of us but his gaze, unwavering and unsettling, is fixated on me. “Chicago,” we answer. He frowns, unconvinced, eyes boring into mine for a trace of a lie. He asks, ignoring the growing line behind us, “You live downtown?” I never once see him blink. “Yeah,” we answer with a nervous laugh. He leaves us dubiously before starting the ride. Every time the rotation brings us to the bottom, we catch him watching us.

The Pig Show
The air reeks of what can only be the distinct odor of feces and fear as we walk into the swine barn. A sow brushes my leg as it totters past, snorting. Her handler slaps her side with a thin crop to steer her away. I glare. The woman doesn’t so much as look at me.

We pet a rotund pig lying on its side in a pen. A boy in cowboy boots chats with my friends. A morbid conversation ensues when my friend asks, “Won’t you be sad when he’s gone?” The boy looks at her, mouth hanging slightly open, before answering, “No, because we get one every year.” My friend continues, undeterred, “Isn’t he your friend?” He looks at her with a vacant expression before laughing—it’s prepubescent but chillingly cruel. We learn, at that moment, that these pigs are animals first and foremost, and I am never more grateful to be a vegetarian.

By the time we leave, the sun is high in the air, and the smell of fried dough is enough to settle into our pores. I notice that the other fairgoers look equally resigned, and the people working the fair look about ready to skip town. In need of a shower, we wait for our bus back to the city in silence. Flies, attracted to the lingering smell of livestock on our clothes, circle us endlessly.