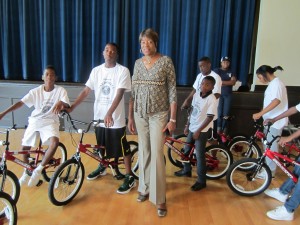 Third Ward Alderman Pat Dowell wasn’t always a bike-friendly politician. But she says a recent visit to bike-crazy Northern Europe opened her eyes to the potential benefits of cycling for South Siders.

Dowell’s Near South district includes parts of Bronzeville, Kenwood, Oakland, Douglas and the South Loop. Last February, as part of Rahm Emanuel’s plan to build one-hundred miles of car-protected bike lanes in his first term, the Chicago Department of Transportation proposed installing protected lanes along Martin Luther King Drive in her ward. Local community leaders bristled and the alderman herself was worried that the white flexible posts used to delineate the lanes would take away from the ambiance of the historic boulevard.

Fortunately Bikes Belong, a nationwide advocacy group funded by the cycling industry, has a strategy to turn on United States politicians to the power of the bicycle. Last year the organization paid to send Northwest Side aldermen Proco “Joe” Moreno, Rey Colón and Ariel Reboyras to the Velo-city bike conference in Seville, Spain, and funded a trip to the Netherlands for Near South alderman Danny Solis. In both cases the council members came home eager to bring Euro-style facilities like protected lanes and automated bike rental kiosks to Chicago. 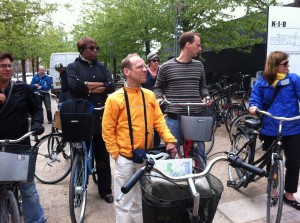 This summer Bikes Belong sent Dowell to Denmark along with North Side aldermen Ameya Pawar and Harry Osterman. Pawar and Osterman were already pro-bicycle but Dowell seems to have returned from the Scandinavian cycling mecca with the zeal of a convert. Last week the three of them plus Solis announced four new bike-safety camps for children in their wards, saying they got the idea from programs they observed in Europe. Instructors from the city’s Bicycling Ambassadors crew will teach the kids bike handling, map reading and route selection and lead them on neighborhood rides, and Bikes Belong is donating a new Schwinn to each camper.

After the press conference in the Fuller Park field house, I sat down with Dowell to discuss her newfound interest in cycling, while kids from the Third Ward bike camp competed in a “slow race,” trying to pedal as slowly as possible without falling over.

It sounds like you had a great experience in Denmark. You said it was the first time you’d ridden a bike in seventeen or eighteen years.

We went everywhere by bike. Coming back to the United States I was sore from all the riding that I did.

How did it feel to ride a bike in Copenhagen—did you feel safe or was it scary?

I wasn’t scared at all. Copenhagen has a great network of cycle tracks. These are bike lanes that are separated by grade from motor-vehicle traffic and pedestrian traffic, so you know that when you’re in a bike lane it’s only for bicycles. It’s a way of separating the different modes of transportation, which is great.

Yes. People here need some encouragement to be able to get on a bike and travel throughout the city. A couple months ago I bought a new bike, a Linus Dutchi three-speed from Rapid Transit Cycleshop on Halsted Street. I’ve found that it’s not always easy maneuvering on Chicago streets. Separated bicycle lanes would provide some protection for people who might be nervous about riding on a busy street. I know Copenhagen-style [grade-separated] bike lanes would be very expensive to install here, but even if you have [at-grade] protected bike lanes with green paint, that will help. 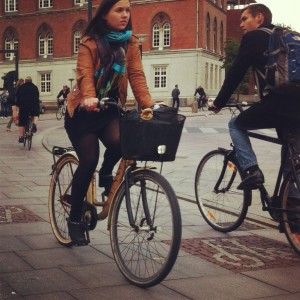 What was the most interesting thing you experienced on a bike in Denmark?

The thing that really impressed me is the way you can use bicycling to create community and interaction between people who don’t know each other. For example, in Copenhagen I was on a bike waiting for a red light to change and the lady next to me was on her way to work and we had a small conversation. That’s a good thing.

Did you see any other cool bike stuff in Denmark?

They have free air pumps for cyclists, and I saw garbage cans that are on an angle so that as you ride by can throw your trash in the garbage can. Another thing I liked is at some intersections there are foot stands so you can relax a little bit while you’re waiting for the light to change. I also thought the bike counter in Copenhagen was interesting. It’s a machine that measures the number of people who pass a certain area on bikes every day. It’s a way of letting the population know that people are riding their bikes. That would work here too.

Did it surprise you how well people are dressed in Copenhagen while they ride bikes?

Yes. And I came back understanding that you don’t have to put on running pants or a tracksuit to ride a bike. Now when I bike from my home to the office I wear my work clothes.

Obviously Denmark is a very different environment from the South Side. How is what you learned there going to be relevant to your constituents?

I think you see it here today. It’s loud in here. The kids are enjoying each other’s company, and they’re learning how to properly ride and maintain a bike. And that’s going to translate to them riding outside down Princeton Avenue or 43rd Street. So hopefully this is just the beginning.

How can adults benefit from better conditions for biking in your ward?

It’s great to encourage people to get out of their cars and get on a bike. There are benefits for seniors who might need a way to move around the community and exercise a little bit at the same time. It’s wonderful for families to be able to bike to the lakefront on a Saturday or Sunday morning. And those people that are a bit more daring can try riding all the way downtown.

Full Moon Fiasco As the name suggests, this non-athletic pub ride to a destination to-be-determined, organized by the Chicago chapter of the Fucking Bike Club, always ends with participants dropping trou for a group portrait. Since this will be the second full moon ride of August, it should be especially rowdy. Friday, August 31, Gannon’s Pub, 4264 North Lincoln, (773)425-6937, tinyurl.com/fbcbluemoon, 8pm; free.

Screening and Discussion of “No Impact Man” This 2009 film follows a Manhattan family as they try to live for a year with zero net environmental impact, which means giving up cars, buses and planes. Afterward Brian Morissey from Active Trans will talk about bicycling and sustainability. Tuesday, September 4, Peggy Notebaert Nature Museum, 2430 North Cannon, (773)755-5122, tinyurl.com/notebaert, 6:30pm-8:30pm; free.