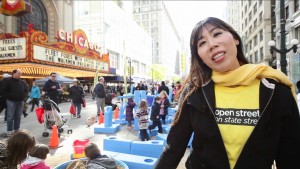 Last year I wrote a Newcity cover story with the subtitle, “Can Open Streets downtown sell City Hall on future ciclovias?” For this year at least, the answer was no.

Since 2005, I’ve been chronicling the Active Transportation Alliance’s valiant efforts to stage ciclovías, Latin American-style events that shut down streets to car traffic, encouraging healthy recreation, community and commerce. It’s hard to believe I still have to report on the relative lack of support from the city, especially since Rahm Emanuel and Chicago Department of Transportation (CDOT) commissioner Gabe Klein have generally been terrific on sustainable transportation issues.

Don’t get me wrong. All the ciclovias Active Trans has organized so far have been fabulous, with thousands of Chicagoans of all stripes coming out to stroll, jog, pedal, play, dance and relax on car-free streets. And I’m certain that this year’s events—Open Streets in the Loop this Saturday and Open Streets Wicker Park/Bucktown on Sunday, September 16—will be the best ones yet.

But with only two ciclovias being held on roughly 1.5-mile routes, we’ve fallen behind other great cities. This year New York is holding Summer Streets ciclovias on three Saturdays along a roughly seven-mile route. Los Angeles is staging CicLAvia on five Sundays along a ten-mile route. Portland, Oregon, is staging five Sunday Parkways events on 7-to-9.5-mile routes in various parts of town. And San Francisco is holding ten Sunday Streets ciclovias on routes of different lengths in a gaggle of different communities.

What’s the difference between these towns and ours? Political will. While they’ve had mayors who have championed their ciclovias and spearheaded planning and funding efforts, Chicago has not. “We’re way behind other cities in the ciclovia movement,” concedes Julia Kim, Active Trans’ Open Streets director. “But I’m confident that once we get Mayor Emanuel’s full backing we can grow to be a leader in the movement.”

In the mid-2000s, Active Trans first proposed staging a Chicago ciclovia. Richard M. Daley supported the idea in theory, but after various city agencies declined to take responsibility for organizing the event, the nonprofit was forced to do all the heavy lifting. This included raising $700,000 to pay for the first three ciclovias held in 2008 and 2009 on routes along the West Side boulevard system, mostly through underserved communities. The bulk of the money paid for the dozens of police officers, traffic-control aides and barricades that the city insisted upon. Due to funding problems there was no ciclovía here in 2010.

After Emanuel took office last year, Active Trans decided to wait until 2012 to ask the new administration for help staging Open Streets. But last year the Chicago Loop Alliance, the downtown chamber of commerce, expressed interest in partnering with the advocacy group to stage a ciclovía on State. With only a half-mile route, from Lake Street to Van Buren Street, much less traffic control was required and the event’s price tag dropped to $125,000, with the chamber contributing $50,000 and helping recruit corporate sponsors. Open Streets on State Street was a huge hit, with an estimated 20,000 participants packing the iconic thoroughfare. 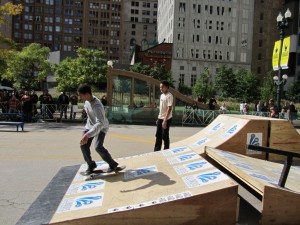 This year Active Trans is expanding the downtown ciclovia to include Monroe Street from State to Lake Shore Drive, which will serve as a car-free route to the Lakefront Trail. The Wicker Park happening takes place on Milwaukee Avenue from Ashland to Western avenues. Kim estimates each event will cost between $100,000 and $150,000. This year the Loop Alliance is chipping in $60,000, while the Wicker Park/Bucktown Chamber of Commerce is donating $50,000. The Illinois Center for Broadcasting, Walgreens, REI and PNC Bank are providing additional funding.

Since the Loop and Wicker Park are vibrant, retail-dense areas there should be a great turnout. But encouraging physical activity is especially important in underserved communities where obesity, diabetes and heart disease rates are high and there are fewer opportunities for healthy recreation. Kim says Active Trans wants to bring Open Streets back to the people who need it most by extending the current routes to link up with these communities. “To get corporate sponsors we needed to do this in dense neighborhoods that would draw a lot of participants,” she says. “But we see this as something that will expand to eventually connect all the neighborhoods.”

CDOT deputy commissioner Scott Kubly says the city shares the goal of expanding Open Streets to underserved communities. But he confirmed that, once again, the city’s role in putting on the events is limited to permitting and logistical support, plus providing police and traffic aids—which Active Trans pays for. “Next year we’re going to focus on what we can do to make Open Streets more successful,” says Kubly. “We’ll be exploring ways the city and the nonprofit world can partner on this.”

The problem is, CDOT and Active Trans have been saying much the same thing for years now. “[Open Streets] may be something that we’ll be more involved with in the future,” CDOT spokesman Brian Steele told me on the eve of last year’s ciclovia. “After October 1 we may have a better idea of [what the involvement will be].”

“We really need to partner with the city to make this a long-term, sustainable program,” Kim told me at the time. “If we can prove the concept with this event, I believe there will be an opportunity to work closer with the city next year.”

This “wait till next year” rhetoric strikes me as Cubs-style wishful thinking. If last year’s wildly successful ciclovia didn’t convince Emanuel that he should throw his weight behind Open Streets, I don’t know what will.

I know that times are tight and that some free events like the Taste of Chicago have been cut or shrunk in recent years. But equally hard-hit towns are funding and organizing terrific ciclovias, so it’s really a matter of priorities. Chicago still spent $6.8 million on the Taste this year. If City Hall can budget that much cash for a fest that’s largely about barbecue and cheesecake, can’t it spare a few hundred thousand, or at least some manpower, for events that encourage healthy physical activity?