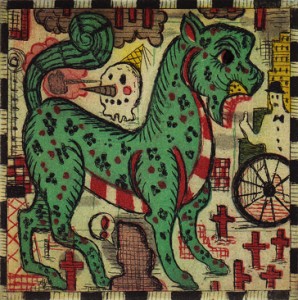 “Well a woman I love is named Ramona
She kinda looks like Tempest Storm
And she can dance like Little Egypt
She works down at the snake farm…”
–Ray Wylie Hubbard, “Snake Farm, ” 2006

There were actually three women that danced using this name—a name that later became synonymous with belly dancing.

Farida Mazar Spyropoulos was a chubby Greek girl who danced at the 1893 World’s Fair, or Columbian Exposition, as it was called. She so wowed the crowds with her “Hoochee-coochee” dance that it was made illegal in Chicago almost immediately.

It was rumored that another “Little Egypt,” Ashea Wabe, was about to dance completely nude at the millionaire bachelor’s party of Herbert Seeley; it was subsequently raided, making a front-page star out of Wabe and insuring lucrative dancing engagements for years to come.

It was the end of the nineteenth century, the Gay Nineties. Day after day, a new P.T. Barnum came along with a new hustle and new technologies to make all things seem possible; a decade of the boastful American ambition, writ large. In skyscrapers, the first automobiles, half-naked women and an electric-lit gargantuan steel circle called, “The Ferris Wheel,” from the top of which, it was rumored, one could see three states. The World’s Fair made Chicago seem like the most modern city in America… and the most American of American cities. Architects remade the lakefront with impossible-seeming structures and electric lights. The city that had burned to the ground twenty years earlier was reborn, a shining bolt of lightning over the prairie.

That dancing-almost-naked thing caught on as well, in a big way. All of the pics of “Little Egypt,” which include many different women, paint an alluring and exotic woman. She (the many “she’s”) was a real looker; big tits and hips—what was then referred to as zaftig—and huge eyes, completed by long, black, inky curls. So popular was this “Egyptian” look, the hookers from the Levee District adopted it en masse. Even years later at the Everleigh Sisters’ infamous brothel, there were always one or two girls who adopted this look.

Fatima Djemille, the third woman to use this name in 1893 was such a fox that a filmmaker no less than Thomas Edison made two movies of her shaking her stuff, “Fatima” and “Coochee Coochee Dance,” a couple of pictures I’m pretty sure are not on the registry of great American films, but may have been Edison’s own private yank-reels.

Chicago was a hustler’s paradise. The newly minted entrepreneurs opened strip joints and gaming houses (complete with dice and card games) in the city’s Levee District, run in the early part of the new century by a gentleman gangster named Big Jim Colosimo, an opera-loving, church-going, moustache-pete hoodlum of the old school who would later get his hair parted the hard way by Al Capone triggermen in their hostile takeover of the city’s rackets.

Chicago was a place of possibility; a place where one could remake themselves and reinvent their lives. Politicians loomed large in the public arena, as did sports stars. This was a culture based on hero worship. Even gangsters were known to sign autographs.

This town has always been full of the cheapest variety of moralizers and holier-than-thou hypocrites who will tell you how to live… until they get caught taking a payoff, getting blown by a cheerleader or spilling an eight-ball of blow in front of a table full of detectives (this happened to a guy I know at House of Blues—and yes, he was arrested). Once the moralizer gets caught, they admit they have “a problem.”  When the rest of us do it, we’re merely moral imbeciles.

What I love about “Little Egypt” was that she seduced a city. It’s 120 years later and we are still talking about her—all three of her.