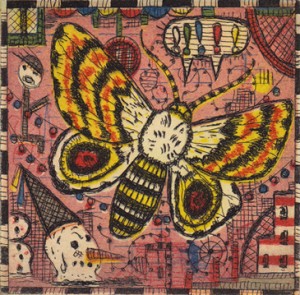 Everything dies baby, that’s a fact
but maybe everything that dies, someday comes back…
Put your makeup on, fix your hair up pretty
and meet me tonight in Atlantic City.
–Bruce Springsteen, “Atlantic City,” 1982

There is a huge set piece in the Green Point neighborhood in Brooklyn. It’s right on the water, and from a distance it looks a bit like a palace of some kind, or an urban mirage. It is the set for “Boardwalk Empire,” the hugely entertaining tale of Prohibition-era Atlantic City on HBO.

It stars Steve Buscemi as Enoch “Nucky” Thompson, who is based on the real-life politico and racketeer of the twenties. It is thinly veiled fiction and is filled with a lot of very good actors doing some of the best work of their careers, most notably, Dabney Coleman and William Forsythe, playing a couple of homicidally despicable motherfuckers, and the great Chicago actor, Michael Shannon, as a Prohibition agent with a bad case of Jesus.

Its plot line is dense and rewarding and historically somewhat accurate, even though it claims to be fictional. Now, about to begin its third season, it suggests a certain thought: If only the real Atlantic City were still somewhat like this.

The first time I ever went to Atlantic City, I was struck by the sheer polarities of its landscape.  Donald Trump had just built a huge, glittering obscenely butt-ugly casino there (the Taj Mahal, I think) and directly across the street was the most austere ghetto I’d ever seen in America. The people of New Jersey had been sold that “casino gambling” cultural band-aid. You can damn near forgive them.  It was 1978 and Atlantic City had to do something. Like the saying goes, “A drowning man will grab a snake,” which is precisely what Atlantic City and the state of New Jersey did.

Casino gambling was supposed to be the cure-all for schools, jobs and housing for the Jersey shore.  What it did was provide a lot of shitty service-industry jobs or make-work jobs and opened the door for organized crime to come in and loot the profitable elements: slots, dealers, food concessions, linen services and garbage collection to name a few. Atlantic City was a shithole with casinos.

To his credit, our own Governor Pat Quinn, isn’t falling for the sucker-bet argument for Casino Gambling—perhaps he has visited Atlantic City and seen this fool’s errand for what it is—another industry that preys on the poor. Perhaps he has taken measure of that city’s  sad entropy and decided it’s not for us. Good for him. Anyone with eyes cannot miss the joylessness of this enterprise on the Boardwalk.

Everyday the buses full of geriatrics would pull in from New York, Philly and North Jersey and wheelchair-bound old blue-haired ladies would pile off them with their jars of nickels and play the slots for a few hours. It wasn’t sexy like Vegas and, unlike Vegas, nobody in Jersey knew how to smile. It was a city of gray, desultory old age limping through the sequential lights, or young men in SUVs, packing “nines” in their waistbands, plying the crack trade on and around the Boardwalk, speeding down Ventnor and Atlantic Avenues being chased by squad cars and blaring rap music.

But boy, what it had once been!  Like Coney Island, it was one of those places where the playful American imagination took hold; a P.T. Barnum-type of place, complete with spectacle and architectural curiosities like “Lucy,” the six-story elephant ensconced on the 9200 block of Atlantic Avenue—kind of a knockoff of the one on Coney Island except, till this day, through a lot of local boosterism and fundraising, it still stands… like a Looney Tunes Trojan horse for the American promise.

The spoils of the new gambling fortunes in Atlantic City were bitterly fought over by the Jersey, Philly and New York mobs.  The “Chicken Man” in Bruce Springsteen’s sad, beautiful and elegiac song that bears the city’s name was Philip Testa, a Philly gangster who tried to muscle in, along with the Bruno family, on the Jersey and New York outfit’s turf. They blew his house up–with him in it.

Casino gambling breathed new life into the organized crime of the East Coast, including the nascent Russian mob who quickly took over the street trades of drugs, guns and prostitution. The Italians had gambling, garbage and labor, still, after all of these years, the best things to have.

“Boardwalk Empire” has also generated new interest in this place. A lot of the boardwalk is being renovated to old-timey, amusement-theme places and no doubt they will fuck it up.

My favorite images of Atlantic City come from the elegant early eighties Louis Malle film that starred Burt Lancaster, in the best role of his life, and a ripe Susan Sarandon who, at one point, squeezes lemons all over her delightfully naked upper body to rid herself of the scent of seafood, while Lancaster surreptitiously watches. The look on his face is one of sadness, regret and animal longing.

A few scenes later, Lancaster is trying to explain this place to a young, idiot wannabe coke dealer. As they are walking down the boardwalk, Lancaster, resplendent in a wintery white overcoat and fedora, suddenly stops and looks the punk in the face and tells him, “See that ocean, kid? Now thirty years ago, that was something, that was an ocean.”

The dope doesn’t understand, but at this point, we sure do. At one time, this was a place of dreams; and Lancaster remembers because he now knows he is this dream’s last, faithful inhabitant.