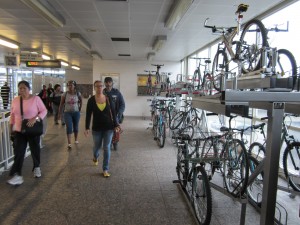 After sprinting east down Fullerton Avenue on my bicycle, I make it to the turnstiles of the eponymous Red Line stop just before the 4pm bike-and-ride cutoff. As I relax onboard with my wheels, the train passes through the near North Side, the Loop and the near South Side, then decreases in speed as we pass through slow zones, sometimes decelerating to walking pace. In all, the fifteen-mile rail trip takes forty-five minutes, with an average speed of merely twenty miles-per-hour.

When we reach the end of the line at 95th Street, the roar of traffic assaults my ears, since the platform sits in the median of the Dan Ryan Expressway. I’m on my way to a CTA open house at the Palmer Park fieldhouse to learn about the 95th Street Terminal Improvement Project. It’s estimated to cost $240 million in federal, state and CTA funds, about half the total bill for Millennium Park. The formal design process is slated for later this year, with construction in late 2014, after the Red Line South Track Rehabilitation Project is completed.According to the transit agency, 95th is one of the system’s busiest stations, accommodating about 20,000 customers per weekday. Also incorporating a bus terminal, it’s served by thirteen CTA bus routes, five Pace suburban bus routes and ten Greyhound and Indian Trails intercity buses—more routes than any other stop.

The station can obviously use a facelift. When built in 1969 as part of the construction of the Ryan, with a design by Sears Tower architecture firm Skidmore, Owings and Merrill, the terminal probably seemed like a gleaming, modern facility, but nowadays it feels like a relic from the Soviet era. Straddling the superhighway just north of its junction with I-57 and the Bishop Ford Freeway, the squat, boxy structure is white with a red racing stripe ringing its crown, but exterior walls are streaked with rust stains.

The CTA says the new terminal will include a gaggle of improvements. Artist’s renderings depict a sleek, Jetsonsesque structure with an arched roof and a new entrance on 95th. Instead of the current crowded walkways, the mock-up shows a broad promenade with a ceiling full of skylights.

I pedal two miles south on State Street to the open house in Roseland, a low-income African-American community just west of the famous Pullman Historic District. A series of display boards are set out for the public to check out and there are many CTA staffers present, but only a dozen or so citizens show up during the hour I’m there.

Agency spokesman Steve Mayberry tells me the purpose of the meeting is to get input from riders. “We’re asking, ‘What bothers you about the station?’ and ‘What would you like to see?’” he says. “This is a large-scale endeavor and without significant public input we wouldn’t be doing the right thing. We want to create a station people will be proud of.” He says public input will play a big role in shaping the final design. 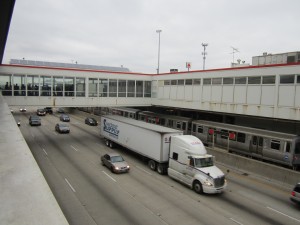 “Some of our plans for the track renewal project were changed as a direct result of comments we got at community meetings,” he adds. That controversial project, estimated at $425 million, involves closing the entire Red Line from Cermak/Chinatown to 95th for five months next year. Mayberry says it will be worth the hassle of customers having to switch to the Green Line and/or temporary shuttle buses. “We’re completely ripping out and replacing 10.2 miles of track,” he says. “We’re telling people, ‘If you give us five months now we’ll give you thirty or forty years of faster service.’”

“People have said, ‘If we were up north you wouldn’t be doing it this way,’” Mayberry acknowledges. “But anywhere in our system where you’re looking at completely replacing the tracks, you’d have to shut it down. When you remove emotion and look at the facts, doing it this way makes a lot of sense.” He says if the CTA did the work on weekends only it would take four more years and another $75 million.

I buttonhole computer science student John Samuel as he peruses the placards. He currently takes a bus from his home in South Shore to the 69th Street Red Line Station, where he catches the Pace 353 bus to Westwood College in south suburban Calumet City. Although the track rehab means he’ll be taking three buses and a train to get to school, the inconvenience will be “absolutely worth it,” he says. “I would rather lose the Red Line for five months than spend another four years of my life riding trains that run as slow as fifteen miles per hour.”

I ask CTA project manager Sonali Tandon about the agency’s proposal to extend the Red Line south from 95th to 130th Street. They’re considering a few possible routes with the “Locally Preferred Alternative,” for which the public expressed the most support, following existing Union Pacific railroad tracks and terminating near the Altgeld Gardens housing project. 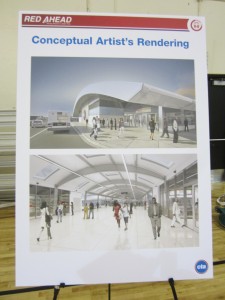 The CTA is currently preparing an environmental-impact statement about this option, which could affect parkland along its path. If that winds up being a dealbreaker, an alternative route would travel in the median of Halsted Street. Tandon says the current cost estimate is $1.4 billion, and the schedule will depend upon federal approval and funding availability.

It’s raining as I leave, so to wait out the shower I mosey over to the Ranch Steak House, 11147 South Michigan, on Roseland’s main drag. Opened in 1964, the restaurant’s décor includes wagon wheels, steer horns and photos of Roy Rogers, John Wayne and Clint Eastwood. Reflecting the neighborhood’s current demographic, there are also portraits of Martin Luther King, Harold Washington and Barack Obama, and soothing R&B plays on the sound system.

As I tuck into the $10.99 surf-and-turf special, I digest everything I’ve heard tonight. The terminal improvements, track renewal and Red Line extension are big, expensive projects that will cause short-term headaches. But they will make ‘L’ travel faster, more convenient and more pleasant. They’ll also be a boon for underserved minority populations on the far South Side, bringing people closer to education and jobs. In the long run, that’s nothing to see red about.

Chainlink Bar Night Meet up with some of the 7,000-plus members of the local bike-social-networking site for drinks at Simone’s, a bar and grill featuring décor made from old high-school laboratory equipment. Thursday, September 20, Simone’s, 960 West 18th, (312)750-9820, tinyurl.com/simonesbar, 7:30pm; free.

Public meeting on the Bloomingdale Trail Check out the latest plans for the elevated park and trail and join the discussion about integrating art into the project. Monday, September 24, Humboldt Park fieldhouse, 1440 North Sacramento, (312)750-9820, bloomingdaletrail.org; free.