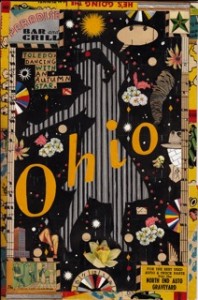 Every election cycle, Ohio is a battleground state. For months before the election there are political operatives, state-wide, working the populace into a furious lather about jobs, immigrants, unions, guns and gay marriage. As goes Ohio, goes America—or so the consensus seems to indicate. Our Speaker of the House, John Boehner, is from Ohio—the orange, douchey crybaby a native of Cincinnati. He typifies the Ohio political operative.

It is a state with an immense unemployment rate—like the rest of America right now. What has particularly hobbled Ohio though is the disappearance of its manufacturing base. The last century’s slow-leak of economies have been almost unduly brutal to Ohio. Steel, paper, glass and rubber all found cheaper places to be made than Ohio. In fact the government, in many cases, paid companies to outsource these industries—and jobs—a dirty secret they blame everyone and everything else for.

It’s actually been a masterful job of political misdirection. Blame the unions. Blame the undocumented workers. Blame minorities. Blame immigrants. It became a round-robin of working-class furies and unfocused bigotries, and much political hay was made from it.

Ohio became America’s blues song. Poverty piled on top of hopelessness, piled on top of recrimination and vitriolic hate-speech. It won the GOP two elections. The Democrats played it safe and timid and lost the soul of Middle America.

Al Gore trying to win an election from Nashville. John Kerry doing his best Kennedy imitation aloof and above it all… The despair and fury of places like Ohio weren’t having any—they were sick to fucking death of candidates who, with a wink, let them know how much smarter they were than the electorate.

It is why a disgrace like George W. Bush could win—he acted like he gave a fuck what they thought.

Did he? Of course not. One can tell by looking at Ohio today—there has not been a whole lot of marked change. County by county Ohio’s lowest percentage of unemployment is 4.4 percent, and in Pike county—the county with the highest rate—it’s 12.9 percent, with most other counties averaging out at just under ten percent. It’s safe to say that a state with nearly ten-percent unemployment has not experienced much in the way of renewal.

If you look at the bald numbers, you’d think not. In fact a cursory glance leads you to believe unemployment went up under Obama’s first term. A harder look will tell you that while there might be more unemployed people—a result of a death-spiral started decades ago with dying industries—there would have been a hell of a lot more unemployment had not Obama bailed out the auto and banking industries. The argument can be made in a salient way that huge auto plants, like Lordstown, a GM subsidiary that employs thousands, would not have survived a collapse of the auto industry.

In the battle for Ohio, though, nobody is talking about that. The political operatives wish only to further erode the American fabric of this place, with more bile, more ugliness and move divisive vitriol.

There is a reason I pay so much attention to Ohio—my favorite poet is a son of this place. James Wright won the Pulitzer Prize in 1980 for his poems about his sad, gray, Midwestern place—Ohio, in Wright’s eyes, seems a purgatory of sorts, a place more to be survived than actually lived in.

His lovely poem “Autumn begins in Martins Ferry, Ohio” is ostensibly about football season. It can now be read as a metaphor for the season of American and Ohio politics, and its definition becomes ever more tragic.

Here it is, an unintended elegy for the bloodsport of American politics.

In the Shreve High football stadium,
I think of Polacks nursing long beers in Tiltonsville,
And gray faces of Negroes in the blast furnace at Benwood,
And the ruptured night watchman of Wheeling Steel,
Dreaming of heroes.

All the proud fathers are ashamed to go home,
Their women cluck like starved pullets,
Dying for love.

Therefore,
Their sons grow suicidally beautiful
At the beginning of October,
And gallop terribly against each other’s bodies.

Here is wishing Ohio a break—some grace, some peace, a sky full of hopeful stars.