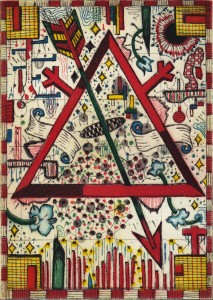 There is a horror implicit in the stick-figure, “Man with a Gun,” from the hobo alphabet. Its triangle with outstretched arms hints at a fleeing figure and encourages the viewer to do the same. Hobos were shot at, shot in earnest, and had a very real and rational fear of firearms.  More than one of them admitted it kept them from committing serious crimes.

One-hundred-and-fifty years ago we were the most well-armed country on the planet. We still are. Firearms were part of our contract with the idea of freedom and sadly, they still are. If one defies the government in any meaningful way, eventually they send men with guns.

If we are honest with ourselves, we know that we’d not have a republic without guns. As much as I hate your hardcore gun nuts (you know the ones–the psychotics who need to own five automatic weapons for “home defense”), I have to agree with them about the preservation of the Second Amendment. Some years ago, our own former mayor defied the Constitution and banned the ownership of handguns in the city of Chicago. Like every well-meaning big-city mayor plagued by gun violence, he tried to apply the baby-sized band-aid to the gaping wound.

And you can bet your ass I knew where to lay hands on one easily, if needed.

There is no percentage in bringing a knife to a gunfight.

What Daley did was to make the average citizen less safe. The idea was that the police would protect us. The Supreme Court reversed the former mayor’s edict a couple of years ago, declaring it unconstitutional. It’s bitterly ironic that a city with a higher body-count than the Afghan War wants to tell us that we should not have the means with which to protect ourselves.

Fuck, the police ARE the ones I’m afraid of in this city. And the politicians who tell me who should be strapped and who shouldn’t.

Every dictator, tyrant, despot and oppressor throughout human history has disarmed the populace as a first step toward bankrupting those cultures of their inherent freedoms. Dissent becomes non-existent.

Two weeks ago a friend of mine; a ninety pound girl who is a  bartender  at Three Aces was shot a block away from where I live—the idiot also went on to shoot another man three blocks later—he already had my friend’s money and her bag —he shot her anyway. It makes me wish she had had more of a capacity to defend herself. As much as I do not like the idea of a concealed-carry  proviso in the law— I certainly understand it. There is a cruel and desperate kind of poverty in our country these days.

I, too, was horrified when that asshole brought a loaded gun to our president’s speech a couple of years ago. It sent a message the responsible firearms owners should have been appalled by. I do believe one should have the right to own a firearm for his home or, in some cases, his automobile.

The most responsible gun owners are people who have a healthy revulsion for just what it is that guns do.

When the asshole breaks into your home? Introduce him to Jesus. The word gets around the asshole community pretty quick:  Break into my home… get dead fast. When kindness fails, a nine millimeter holds sixteen rounds of persuasion.

If this seems like a less-than-nuanced argument, look around. The economy is in the shitter. There is less opportunity and more hunger and desperation. In Chicago’s tony Lincoln Park, there were jump-out crews working out of a van, robbing couples, (and for good measure) beating the fuck out of them with bats. Five years ago, this didn’t happen… and now it does.

Liberals love the making of tough gun laws, even though those laws do not make them one bit safer.

A great percentage of gun violence is an outgrowth of the drug trade; fifteen-year-olds blasting away with firearms they can barely lift. Our ongoing tragedy known as the “War on Drugs” has armed every kid in the city. The “War” is not on drugs. It is on the poor. The more law-enforcement dollars, the more profit margin for dealers in drugs… and guns. It is a zero-sum gain and a self-fulfilling prophecy of despair. The minute you legalize drugs, the profit goes out of the black market. It seems nobody remembers that we never heard the term “bootlegger” again after the end of Prohibition.

This is what worries me about the government and the question of guns: a culture where only the government is allowed to have firearms? This is an invitation to tyranny. Think about everything the G is in charge of now. That is all working out swimmingly, isn’t it?

As much as I hate to side with the gun nuts—and they are nuts—part of the reason to have a gun is to protect you from THEM. I hate to admit the deluded, deficient, slack-jawed yo-yos happen to be right.

That Chicago has a murder rate worse than  D.C. or New Orleans—or Afghanistan for that matter; should be a source of great despair for those who govern us.  A few columns ago I bitched about the proliferation of cameras that capture every chicken-shit traffic infraction  but never seem to observe anyone doing bodily harm to each other—another case of  the  piss-poor priorities of those  in power—nickel and dime the citizen to death with taxes, tickets and all other manner of bullshit; but do not make crime job one?

There is a sign on a door here in Ukrainian Village—it is a rendering of a revolver pointed at the viewer—the caption says: ‘Never mind the Dog—Beware of me, Mother-fucker’.

I don’t blame them—it is where we are now.