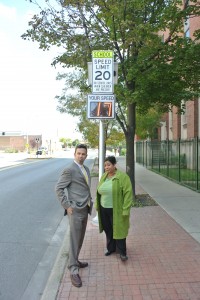 Running late as usual, I hop on my bicycle and sprint south from Logan Square, fortunately with a sweet tailwind at my back. I’m heading to the ribbon cutting for new Children’s Safety Zone traffic-calming and pedestrian-safety treatments at Claremont Academy Elementary School, 2300 West 64th Street in West Englewood.

The city has 1,500 of these safety zones, designated areas within one-eighth mile of schools and parks. The Chicago Department of Transportation (CDOT) is planning to install additional infrastructure at dangerous intersections within these sectors to discourage speeding and make crossing easier. Currently there are about 3,000 pedestrian crashes a year in the city, with about 800 involving kids. And in this era of rising obesity rates, the goal is also to encourage more children to walk to school and to play at their local park.

I zip down Kedzie Avenue through Humboldt Park, and Garfield Park, where I get a glimpse of Ruby’s, 3175 West Madison Street, a soul food restaurant where Martin Luther King Jr. often ate during his campaign for fair housing here. I zoom through Lawndale then shortcut across the lush Douglas Park green space to California Avenue, then continue south past the bodegas and taquerias of Brighton Park.

Turning east on 63rd Street, I make it to the school just in time for the press conference at 63rd and Claremont, the northwest corner of the schoolyard. Here the east-west street is a busy four-lane with 18,000 cars passing by the intersection every day, according to CDOT. Between 2008 and 2010 there were thirty-two crashes involving children within the school’s safety zone, half of them involving cyclists or walkers. One of these sixteen kids was seriously injured.

In response, the agency has installed a new pedestrian refuge island, high-visibility, zebra-stripe crosswalks, “Stop for Pedestrians Within Crosswalk” signs and a decal on a corner that reminds people on foot, “Be Alert. Be Safe.” They’ve also stenciled the words “Safety Zone” on the asphalt approaching the intersection and installed a speed feedback sign that tells drivers how fast they’re going. The total cost for these treatments was about $90,000. 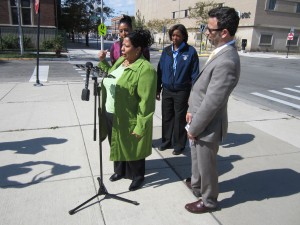 CDOT’s Commissioner Gabe Klein steps up to the microphone to talk about the city’s ped-safety strategy. “We’re focused on education, engineering and enforcement,” Klein says. “We’re redesigning [intersections] with the ‘eight-to-eighty’ goal in mind. We’re looking out for eight-year-olds who are by themselves on the street, as well as eighty-year-olds that are on the street. And if we design for those folks then everybody else will be just fine.”

He goes on to discuss the new Chicago Pedestrian Plan, released last month and viewable at ChicagoPedestrianPlan.org, with 250 recommendations for making walking safer, more convenient and more enjoyable. “In this plan we state our goal of reducing serious pedestrian injuries by fifty percent over the next five years and eliminating pedestrian fatalities and, in fact, all traffic fatalities within ten years,” Klein says. This goal, called “Zero in Ten,” may seem like pie in the sky but, Klein argues, “With programs like the mayor’s safety zone initiative we can actually make that goal a reality.”

Of course the most controversial aspect of the city’s new safety initiatives is the upcoming installation of automated speed cameras, approved by City Council earlier this year. In 2003, Chicago implemented an automated red-light camera program, which has probably prevented many crashes but has also raised millions of dollars for the city via tickets. Many have criticized the speed cameras as a money grab by Rahm Emanuel to help patch the budget gap, but if we can save lives and reduce the deficit by forcing motorists to obey traffic laws, that strikes me as a win-win.

Klein says next year the city will begin installing the cameras in school safety zones, in a maximum of twenty percent of the zones. The program will start with at least twenty-five cameras but could expand to 360 locations. Drivers will get a warning for their first violation, followed by tickets of up to $100 for subsequent offences.

Next, 15th Ward Alderman Toni Foulkes takes the mic to share a story of a near-miss caused by a speeder. “I was over here on a Sunday afternoon and it was raining,” she says. “I was standing on the sidewalk and my car was parked right in front of me with blinkers on. A gentleman made a left-hand turn onto 63rd but he went a little bit too far and lost control and ran into my car. If the car hadn’t been there I know he would have jumped the curb and I probably wouldn’t be standing here today. So I personally know the importance of controlling traffic and speed.” 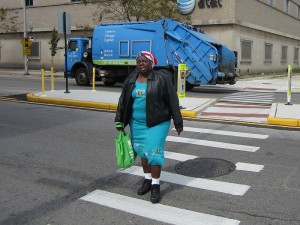 Afterward I ask the commissioner to demonstrate the new crosswalk. As he strides back and forth across the intersection in his gray suit and yellow power tie with pictures of automobiles on it, motorists obey the “Stop for Pedestrians” signs without being prompted. But when longtime Englewood resident Denise King, a retired hospital worker, approaches the intersection, she tells Klein she doesn’t trust drivers to stop for her.

I ask her what conditions were like before they put in the new safety facilities. “You had to wait until the traffic lightened up before you could get across,” she says. “But now that this is up they still aren’t going to stop. So it’s best you wait until the light [a block west at Western Avenue] turns red.” Is it any help that the new refuge island allows you to walk halfway across, wait for traffic to pass, and then cross the rest of the way? “Yes,” she replies. “I have a back injury, both of my ankles have been [operated on] and I had knee surgery, so running is not my best thing.”