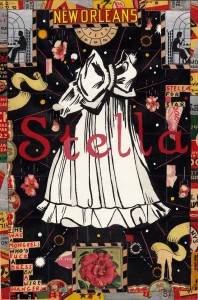 When you hang around New Orleans long enough, eventually you run into someone with a Tennessee Williams story. He lived there for a long time as a young man. His plays and repartee would have one believe that he lived in the Quarter and was part of that milieu. The truth is, early on, he lived out by Elysian Fields in a working-class enclave that was infinitely less glamorous and lacked the transgressive chic of the Gay Quarter culture he lived among when he became successful. My friend, Henri Schindler, told me stories of Williams flirting with the waiters at Galatoire’s while drinking the afternoons away.

He also relayed another tale of Williams, after he was famous–meaning after “A Streetcar Named Desire”–getting waylaid by a group of blue-haired ladies from a book club wanting to know all about New York and Williams not quite knowing how to handle this group of curious interlopers. For all of the drunken Williams tales, he was actually quite shy, or those who knew him have told me. He is, perhaps, our greatest playwright. At the very least, he is probably our most internationally known.

Thomas Lanier Williams was born in Columbus, Mississippi, the son of an alcoholic and abusive shoe salesman and a fading Southern belle-type mother. He was closest to his sister Rose who, sadly, suffered from schizophrenia as she grew into her teen years. It is thought that Williams’ ability to write women characters with great insight and empathy has its origin in his close relationships with his sister and mother. It is rare to find anyone who writes better women’s roles than Williams.

It is hard to overestimate the impact of “A Streetcar Named Desire.” It made a star of Marlon Brando and also holds up today as a great play. No matter where you are in the world, the sun never sets on this work of art. Some company, somewhere, is staging it. And why not? It serves up the great thematic human desires in spades; sexual tension, madness, loneliness, abandonment and animal longing.

For actors, this play has it all. How many Blanche DuBois’ wander our streets to this day, perennial ingenues still harboring illusions about their youth, beauty and desirability? I would guess many. I mean, really, where do you think all of that Botox is going? And how many Stanley Kowalski’s, with their working-class furies and sexual piggishness knotted like tangled kite-string? Hell, try any Lincoln Park sports bar…

The one who interests me the most in this most American of plays is Stella. Stella Kowalski knows her mentally challenged Pop-Tart of a sister and her brutal, sexually rapacious husband are headed toward one another like two locomotives, and it has always seemed to me that she practically curtsies to get out of the way as this happens; knowing that both will exact their temporary satisfaction, as well as their own damning punishments from this act.

After Stanley rapes Blanche, he is finished as a man. Even he knows it. Blanche is taken away to an institution, grateful for “the kindness of strangers,” and Williams hints that they get not only what they deserve, but perhaps, darkly, what they actually want.

There is a production of “Sweet Bird of Youth” at the Goodman right now, directed by the great David Cromer and I am excited to see it—it seems the older I get , the more Williams’ sad tales resonate with me—the regret, the heartache, the longing. When you get to the other side of fifty, these themes seem to have more currency in one’s life. I don’t know anyone at my age who regrets nothing. I don’t know anyone my age who has not been heartbroken at one time or another.

When there is more behind you than in front of you, the casual brutalities in life seem all the more ugly. Whatever cruelties were visited upon Williams, he paid back on the page in spades, and if his biographies are to be believed, in life as well.

My friend, the filmmaker John McNaughton, recently directed a stage version of “Streetcar” in Los Angeles and loved it. He also told me a story of Tennessee Williams in observing previews for this play, cackling with laughter when Stella delivers the “kindness of strangers” line, a story passed down from a lot of people who knew Williams.

There are stories of Williams surreptitiously attending productions of “Streetcar” all over the country and raising hell if they fucked with his play. Though he had many other successes, he was most protective of “Streetcar.” “The Rose Tattoo,” “Cat on a Hot Tin Roof” and “Sweet Bird of Youth” were also hits. Later in life, his plays were not as well received, though recently in Chicago “Camino Real,” a darkly surreal Williams play of a dead-end Spanish town, got a fitful production full of imagination and great performances at the Goodman Theatre. I was bummed to have missed it, but by all accounts, it was a sexually frank, no-holds-barred imagining of a wildly misunderstood play, directed by the great Spanish director Calixto Bieito. The reviews were mixed, but everyone I spoke to loved it and admired the fact that it was an adult piece of theater—Tennessee Williams, very close to the milieu of his own life in New Orleans, with its people for the “other” side–boxers, whores, poets, strippers and stoned dreamers—those Williams counted as his own, the marginalized and the mad, all coming out to dance.

Dear Mr. Fitzpatrick, Have you any aspirations for a book? Thank you, A dedicated Reader jeffrey